Just noticed this on Amazon… You can pre-order Windows 7 from Amazon and save 50% if you order before July 11.  The operating system will be released October 22, so you’ll have to wait a few months before it arrives.  If you’re serious about upgrading Windows, though, this is a way to do it on the cheap, with a legal copy.

Last night I went to the Peabody rooftop party, getting there right as Muck Sticky took the stage.  I’d heard about Muck Sticky but had never really listened to their music or seen them in person.  Within a couple of songs I had become a huge fan.

Best way I can explain them to you is to tell you to check them out for yourself:  Here are links to their videos for It’s Nice to Meet Ya and Thingy Thing.  Here’s a link to their MySpace. (hmmm, the MySpace page doesn’t seem to be completely loading right now, wonder what’s up with that)

Yeah their music pushes the envelope, even to the point of being offensive if you don’t have a sense of humor.  But if you do have a sense of humor, it’s absolutely hilarious.  And not only did I like their music, but their message as well.  At one point, Muck Sticky grabbed the microphone and went on a rant for a minute, telling the crowd, you can do whatever with your life you want to, just be yourself, don’t be what other people want you to be, just do your own thing and live your life one day at a time.

I left the rooftop party early (we’ll get to the reason why in a minute) and found myself riding down the elevator with Muck Sticky himself.  I complimented him on both the music and the message.  He was a super nice guy and told me they’re hosting a concert in Handy Park on Saturday, July 4.  If you’ve never heard them before, I highly, highly recommend you get down to the park and check them out.  I’m going to make an effort to get to future Muck Sticky shows, even if it means (horrors) getting in the car and driving.

Muck Sticky and the two other acts, Valerie June and Al Kapone, are all featured on MTV’s series Five Dollar Cover.  This was an effort by Memphis filmmaker Craig Brewer to package up a number of outstanding local acts and get them some national exposure, while providing some quality entertainment at the same time.  Great job… I haven’t watched the series yet but am definitely going to now.

And once again, I have to say, massive kudos to the Peabody on booking these acts.  This is further proof that the Peabody has really turned the corner on the entertainment it provides.  The attitude there used to be, “We’re the Peabody, we can get by on name alone and people will still come to our parties no matter how bad they suck.”  Now they’re doing things differently.  They’re becoming part of the local community by doing things like promoting the wonderful $5 Cover project.  They’ve lowered their drink prices at the Corner Bar to entice locals to come in.  They’re on Facebook and Twitter and are not only announcing their entertainment, but listening to the community on what they want to see at the Peabody.  Great, great, great job.

I did something really stupid last night.  I rode up the elevator with this sweet girl who was by herself and told me it was her first time at the Peabody party.  When we reached the top, I showed her where the entrance was, then went and got my wristband for the VIP area.  About 10 minutes later I realized, I can get a guest in VIP too, and I didn’t have one with me last night – why didn’t I get her in?  What an idiot.  It wasn’t a matter of trying to pick her up or anything; I just wanted her to have a good time.  Despite being called a “meet market,” the rooftop parties can be really uncomfortable if you don’t know people there.  I feel bad for having missed an opportunity to extend some Downtown Memphis hospitality.  I went back and looked for her later, but couldn’t find her.

I got some pics of the Nuh-Uh Girl eating strawberries in the VIP area, but I don’t like them as much as I like this pic from the wedding last Sunday: 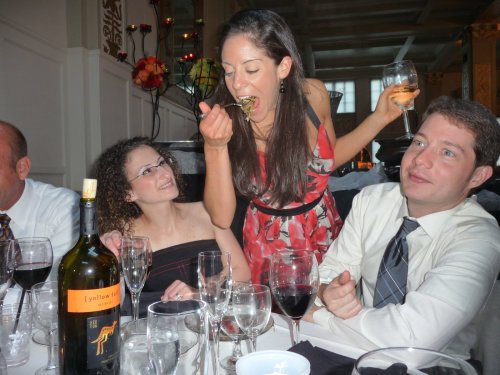 Leinenkugel was passing out a lemon-flavored summer beer in the VIP area.  I forget the name of it but it was really good.  Look for it on the store shelves.  I wish the Saucer would carry it (here’s a hint: get rid of Turbo Dog to free up a tap).

A couple of weeks ago, I was at the Peabody rooftop, and someone let Meghan in the VIP area.  I thought, wow, the VIP area has really hit rock bottom.  I was wrong.  Rock bottom happened last night.  After watching Muck Sticky, I decided to get another beer and started to walk over to the VIP area and who did I see there but… King Willie.  Our soon-to-be-ex mayor (I hope) was there, with Kevin Kane.  At that point I just decided to leave.  Hated to miss Al Kapone though.  I posted to my Facebook account that Willie was on the rooftop and several people responded that I should shove him off the roof.  If only I could.  I guess he was up there looking for his next baby mama.

Plans for this afternoon and tonight:  No idea.  May stop by the Saucer for a beer this afternoon, but Old Lazy Ass is bartending so I won’t be sitting at the bar.  Oh, that reminds me, last night Old Lazy Ass was telling people that I proposed to her but she refused because the ring was too small.  Let me respond to that:  1) If Old Lazy Ass was the last woman on earth, I’d take a new-found interest in sheep; and 2) If I did propose to her and she turned me down, it would not be because the ring was too small, but rather that I’m too young for her.

Wonder if Bangkok Alley is open today?  If they are I think I may hit them up for lunch.  I’m outta here for now. 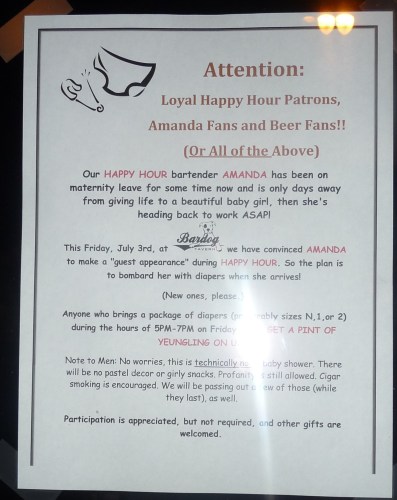 First of all, a very happy 52nd birthday to Bret “The Hitman” Hart. Damn I spent too much time watching wrestling in the 1990s.

The big event going on Downtown tonight is the New Kids on the Block concert at the Mud Island Ampitheatre. Hmmm I wonder if that will draw a similar crowd to recent Justin Timberlake concerts, when Downtown was loaded with hot girls dressed in really sexy outfits. Hope so.

The Red Rooster is having a New Kids after-party tonight with $2 “The Right Stuff” sippies, $1.50 longnecks, and $5 NKOTB bombs. I have no idea what significance “The Right Stuff” has as far as getting a drink named after it. I’ll have to ask Sam if I see him at the Rooster tonight. For some reason I have a feeling that Sam is a big NKOTB fan.

I found out via Twitter yesterday that my Peabody rooftop VIP passes get me into the special rooftop party they’re having Saturday, July 4, with a buffet of summer picnic food and Ingram Hill. Cool, that’s a $20 cover I’ll beat if I go… not sure what I’ll be doing that night… a lot of my crew will be out of town in Chicago this weekend. Anyone going to the Peabody? If I go I’ll have an extra VIP pass to get someone in. Wonder if the Nuh-Uh Girl, who also has VIP passes, will be going… she’s not one to pass up a free buffet.

Once again, if you use Facebook and Twitter I highly recommend you sign up for FriendFeed. One added advantage… a lot of businesses started blocking Facebook when it got hit with KoobFace and other viruses and malware a couple months back. FriendFeed may allow you to get around that filter and see what your Facebook friends are doing.

There’s an opening reception at the Power House gallery on G.E. Patterson tomorrow night, Friday, July 3, for “Everywhere, Nowhere, Somewhere,” their first Director’s Choice group exhibition looking at the oddity of humanity with pieces that border on the bizarre, the compulsive, and the beautiful. The works will be displayed through August 10.

There’s a group on Facebook called “Guns and Alcohol Don’t Mix.” Please join it in protest of the ridiculous and dangerous new Tennessee law that allows people to carry guns into bars.

Tonight is an early weekend night for many people, me included… I can stay out late tonight without paying for it on Friday for a change. Probably Peabody rooftop party for me and who knows after that.

My friend Otto posted to Facebook and Twitter yesterday about FriendFeed, a service that aggregates all your friend’s social media posts into one feed – Facebook, Twitter, Digg, Flickr, etc.  I signed up a few hours ago and am very glad I did.  Everyone on those services would benefit from FriendFeed.

If you’re looking for something fun to do Downtown this weekend and want to hear some live music, check out Dash Rip Rock at Automatic Slim’s this weekend.  They’re a Louisiana swamp band that has been tearing it up at college bars in the South for 25 years.  For more info on them check out their website and Wikipedia page.

If you’ve never been to Slim’s before, or if you haven’t been since last fall when the restaurant changed ownership, be sure to try some of Chef Michael Patrick’s outstanding food.  One of the best chefs in town, for sure.

Bardog Tavern is starting a “Bikes, Brunch, and Beer” event every Sunday from noon to 3. You’re encouraged to ride your bike to Bardog – motorized or not, but they prefer motorized because they like the rumble of the engine. There will be steak and eggs, French toast, omelettes, and more. Complimentary Bloody Mary, Screwdriver, or Mimosa with brunch purchase, and they will have $2 Schlitz cans and $1.50 PBR.

They are also still holding their Texas Hold’em tournament on Wednesday nights in the Underdog Room. Win prizes, and build points toward the grand prize of a cruise… from the e-mail Aldo sent out, it looks like it’s still anybody’s game, and a new contestant could still come along and win enough points to get the cruise 9 weeks from now.

The Peabody rooftop party this Thursday, July 2, will feature music by the artists on MTV’s series $5 Cover – Valerie June, Muck Sticky, and Al Kapone. Appropriately enough, there’s a $5 cover to get in. Ladies free before 8.

The Peabody will through a bonus rooftop party Saturday, July 4 for the viewing of the Downtown fireworks. Party buffet of summertime picnic favorites and drinks from MillerCoors. Ingram Hill will perform, and Maney and Riley from Q107.5 will host the event. 6 to 11 PM, $20 cover, ladies free until 7 PM.

That’s it for now.  Gotta get back to work.