Sorry, I didn’t take a pic. The Cheese Fries at Huey’s are $6.25 and you can get chili for $1 more. Order extra ranch instead of ketchup, because ketchup sucks. You’ll get 3 cups of ranch. You also get a fourth cup, of bacon bits, to distribute over the fries. Do you understand now why I’m recommending this dish?

Invited to a Super Bowl party that is BYOB? No one wants to be “that guy” who shows up empty-handed and then mooches everyone else’s beer. If you’re looking for a place to pick up some cheap beer to bring, don’t forget about the cash & carry at Carolina and Second.

I haven’t been in there in about a year, but when I was there they had a pretty big selection of beer. Prices were good too. I remember seeing a 12-pack of PBR 24 ounce tallboys for about $14.

It’s a CASH & carry, so if you’re the type who normally charges everything on a credit card, you’ll want to hit an ATM before going down there. Also, its hours tend to be a little unusual – last I checked they closed at 3:45 on weekdays and even earlier on Saturdays (is it 2:45 or 11:45? Trying not to confuse it with Lit).

Check it out for cheap beer, and for cheap groceries as well. The candy store across the street is not a bad place to stop either. 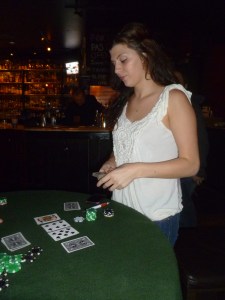 Brick wants you to come play poker with her at the Silly Goose, tonight at 10. It’s part of the poker league that also includes Bardog Tavern, Bar None, and the Bayou Bar & Grill. Weekly prizes at each location, and you can accumulate points over an 8-week period to qualify for the final table, where you can play for big prizes.

Brick is shown here dealing the cards last week after she went all in pre-flop with Nine-Deuce. I didn’t ask her reasoning behind the all-in, but I think it was probably something like, “9 plus 2 is 13, and 13 is my lucky number so I went all-in.”

Mondays normally suck, but I’m in a good mood today… just gave a demo of the company Intranet site I’m building with WordPress, and it was well received. The MyCalendar plugin, by the way, is simply awesome.

Let’s get to the news…

I’m starting to get info about Super Bowl parties that will happen Downtown on Sunday. One of those will be at Kooky Canuck, where the game will be shown on 8 TVs with giant projection screen with sound on. $2 34 oz. Bud Light, $2 wells, $11.99 for 24 wings with fries.

If you know of other Super Bowl parties that are Downtown and open to the public, send the details to paul@paulryburn.com and I’ll post them.

Congratulations to Dyer’s on being named one of the best burgers in the U.S. by Food & Wine magazine. I can’t argue. When I moved Downtown, Dyer’s was the very first meal I had as a resident. Good to see Dyer’s burgers being mentioned in the company of great burgers like California’s In-n-Out Burger.

The Flyer’s Hunrgy Memphis blog interviewed Krista McCracken, sommelier at the Peabody, recently. In the interview, McCracken talks about the new Master Tasters wine club that will meet for the first time Wednesday at the Corner Bar.

Congratulations to Llama Tag on winning the SeedHatchery investment (Edit: Thanks Patrick for the correction) for the best pitch at the 48-Hour Launch event that happened this weekend. Llama Tag is described as a way for you to leave your mark everywhere you go, via social graffiti/augmented reality. Sounds interesting… follow them on Twitter at @llamatag. There are a lot of neat business ideas coming out of Memphis these days.

Pint Nite at the Saucer tonight, most drafts $3… I’m 16 beers away from finishing my 5th plate, and I plan to reduce that number to 13 tonight. The 10:00 poker game at the Silly Goose is possibly on my agenda as well.

Tonight is Downtown Night with the Grizzlies. $59 gets you a $99 club level seat, a Grizzlies gift, food and drink in Opus Restaurant, and mingling with your fellow Downtowners, members of the Grizzlies operational staff, the Grizz Girls, and Grizz the mascot. To get this deal you need to call Carl Rosen at 901-205-1445 before noon today.

If you’re a Downtown resident or supporter, make sure you don’t miss this Commercial Appeal article outlining the strides forward Downtown has made in the past year.

Also don’t miss this article on the skateboarding competition in Uptown yesterday.

When I was recapping what I did Friday night, I forgot that I left out a very important stop: Rehab Disco, where a friend was having a birthday party. While there, JJ took me downstairs to Rockbottom and showed me the new tap wall they have installed. 12 beers on tap, or as I like to think of it, PBR and 11 other beers on tap.

The upstairs part of Rehab is an upscale club, and they’ve been known to draw some nationally and internationally known DJs, as well as the best of our local DJ talent. Downstairs is Rockbottom, more of a locals’ type bar where you can chill out and have conversation with friends.

Good place. I need to spend more time there. To keep up with what’s going on at Rehab, “Like” their Facebook page.

Okay, I’ve caught up with Twitter and Facebook timelines from last night. It looks like a lot of people were dragged to karaoke night at the Blue Monkey, even though they didn’t want to go. If you were one of those people, I have a reminder for you:

It’s nothing against the Monkey, as I’m always quick to point out. Excellent food, service, and atmosphere. It’s just that karaoke sucks. It sucks on a random Tuesday or Wednesday, but the suckitude multiplies by 10 when you realize you’re wasting a Saturday night watching your friends (of both sexes) turn into divas in the presence of alcohol and a microphone.

It is totally, completely acceptable to say, “Well, if you guys want to go there, go ahead, but I’m going somewhere else.” Don’t give in to the will of the majority. If you want to be near your friends, you can hang out at Earnestine & Hazel’s or Max’s Sports bar nearby, and then meet up with them when they are done making fools of themselves. Alternately, you can hop a trolley, slip a dolla in the fare meter, and ride north to the core where you have many more entertainment options.

If John Lennon arises from the dead and goes to the Monkey to sing “Imagine” on a Saturday night, maybe I’ll go. Short of that, karaoke ain’t never going to happen as far as I’m concerned. 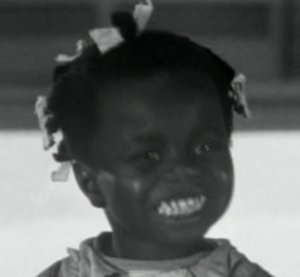 Friday night I was at the Beer-Tron-a-Ton, the computer at the Flying Saucer that records what beers you’ve purchased. I’m down to the last 20 beers toward my fifth plate, and around that point it gets really hard to find anything good left to drink that isn’t massively expensive. I remembered that one of the bartenders had told me I should try RJ Rocker’s Buckwheat (After Dark.) So I printed out a ticket for that one, handed it into the bartender, and they gave me a beer.

Usually I’m not a big fan of dark beers, but this one wasn’t bad. I reasoned that it was the addition of buckwheat as an ingredient, although I really have no idea what buckwheat tastes like. Anytime I drink an unfamiliar craft beer, I like to examine the bottle’s label to see what information I can gather. 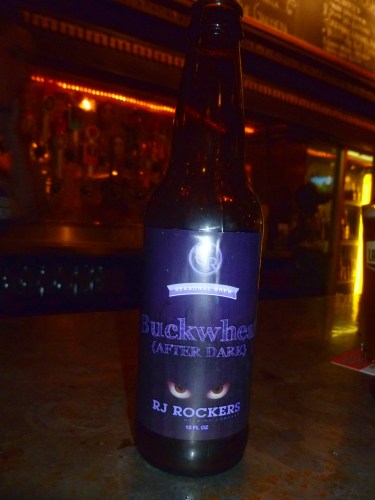 Wow. Anyone who’s ever watched episodes of The Little Rascals/Our Gang knows why there are two eyes staring at you on the bottle. It’s a reference to the many times the lights would go out with Buckwheat (pictured above) on the screen. All you could see would be the whites of his eyes. In 1936, when the episode I screen-capped the image above was produced, that kind of racial humor was accepted in society. Putting it on a beer bottle in 2011, though, is an odd choice.

Further examination of the bottle revealed that the beer was brewed in Spartanburg, South Carolina. It figures the Buckwheat After Dark label would come from the heart of the Old South. When I was a corporate trainer in 1999, I taught a couple of week-long classes there, and can confirm that it is every bit as much of a shithole as you might suspect.

Taste of the beer was not bad, but man… I just don’t know about that label. Wonder if they sell it at stores near Ole Miss? Bet it would be a big hit there.

Just got up. Time to catch up with Twitter/Facebook and see what happened last night that I missed. After an excellent dinner at Bangkok Alley, my body was just screaming at me, “You must sleep… NOW.” So I went home and went to bed at 9. If I’m going to waste a Saturday night, I’d rather it would be in January than in a nice-weather month like April or May. Got 11 hours quality sleep and feel like a million dollars now. Bring on Sunday Fun Day!

Every day I check Wikipedia’s main page and read the featured article. Today it happens to be a Memphis article. Congratulations to Temple Israel on being featured.