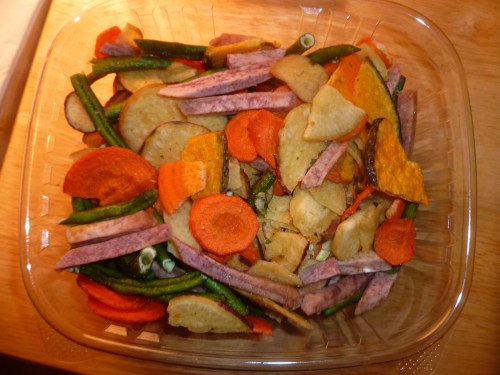 It’s about 5:30 on New Year’s Eve, and I’m home waiting on a line of thunderstorms to pass through Downtown Memphis. On the way home, I stopped by City Market and picked up these Vegi Chips. Looks like green beans, carrots, onions, zucchini and squash. Tasty. Even better, I had a little dill ranch dip left over from last night’s run to Kooky Canuck. That really goes well with the vegi chips.

Going to let the rain pass through, then back out.

Someone e-mailed me the following question:

“Hey Paul, what’s the safest route to take out of Downtown tonight, given that a lot of cops will be out? I don’t want to get pulled over.”

Happy to answer this question. The safest route is the one your cab driver takes, after you call 577-7777 and request that a cab be sent to your location.

Seriously, don’t drink and drive. I’ve heard from multiple sources that the cops are really going to be all over the place looking to bust DUIs. It’s just not worth it to try and avoid them.

Okay, I will give one piece of advice. If you’re driving and you see a traffic light that has been set to flashing red, come to a COMPLETE STOP before you proceed. I can pretty much guarantee you there’s a police car somewhere just out of sight.

A lot of Downtown bars stay closed during the day January 1, opening at 5. It kind of makes sense – at most bars the staff is there until 5 AM cleaning up after Amateur Night, er, I mean, New Year’s Eve. They deserve to get some rest. However, it sucks for Downtown regulars, who want to get out, drink a beer and watch some football.

Max’s Sports Bar is an exception. They will be open early today and tomorrow, they have cold PBR on tap, and they will have the bowl games on their 10 TVs. So if you’re looking to get out tomorrow, that would be the place to go. Max’s is the bar formerly known as Calhoun’s, on G.E. Patterson next to the Cheesecake Corner.

For those who will be out today and who want to keep up with the weather, Memphis’ most accurate and thorough weather forecasts can now be viewed from your phone. MemphisWeather.net has a mobile site at pda.memphisweather.net. I added it to my home screen on my iPhone.

Chatter I’m seeing on Twitter is not looking good… tornado warnings north of Little Rock already. That stuff is headed this way.

As I’ve mentioned previously, I’m not a huge fan of New Year’s Eve. Venues charge ridiculously high cover charges. You have to fight your way through crowds. Long lines to get drinks and use the restroom. Plus, it’s “amateur night” when all the people who don’t know how to party come out. Most places, including some of the bars where I hang out regularly, will downright SUCK tomorrow night.

That said, here are a few suggestions for places that might not suck:

– Kooky Canuck. They’re having a New Year’s Eve party with $2.50 Bud Light, $2 champagne, and a DJ. No cover. Shawn and Lana know how to throw a party. Yeah it will likely be packed, but if you enjoyed their Halloween and Christmas party, you’ll probably have a good time there for NYE.

– Rehab Disco. They’re not doing a cover either. $15 bottles of champagne, balloon drop at midnight. Gotta respect a business that could rip its customers off with an exorbitant cover, but chose not to.

– Paula & Raiford’s Disco. I haven’t heard of anything special that they’re doing, but come on, it’s Raiford’s so it’s guaranteed not to suck.

– South Main. They’re doing their usual last-Friday-of-the-month Trolley Night from 6 to 9, with a “Trolley Drop” at 9. Much more laid-back than most of the other parties going on NYE. A lot of the Downtown locals will be here.

Those are just a few picks. If you want an overview of all your NYE options in Memphis, you can’t do much better than this excellent Memphis Flyer article.

Yellow Cab has tweeted that the best place to catch a cab tomorrow night is in front of the Orpheum, due to street closures. 577-7777 is their number and you can follow them at @MemphisTaxi.

Speaking of New Year’s Eve sucking, MemphisWeather.net says there is a possibility of severe storms tomorrow night. If you’re going to be outside, you better have a plan to take cover. More info about tomorrow night’s weather on MemphisWeather.net’s blog. Oh – also – once the storms move through, the temperatures will drop from the 60s/70s into the 40s, so you might not want to go with shorts and flip-flops for NYE attire. (Tube tops are encouraged, though. Speaking of which, I’ve been told that blog celebrity Nikki November has a new tube top dress to wear tomorrow night. I’ll try to get pics.)

In other news: If you use WordPress, you need to update to 3.0.4 immediately. A security flaw was uncovered that the new version fixes. Head WordPress guru Matt Mullenweg rates this update as “critical.”

Entrepreneurs: Don’t miss this CA article to learn how you could receive $15,000 in startup funding and access to some of the best mentors in the city.

Liberty Bowl parade is at 3. I’ll be working and will miss it. I see that Georgia’s visit to town has brought my favorite blogger/MILF out of hiding, but it’s unlikely that I’ll see her at the Saucer later on because she has the girls with her.

Off to lunch… a few more hours and the 3 day weekend begins. 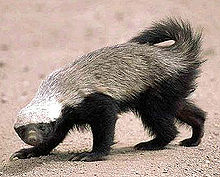 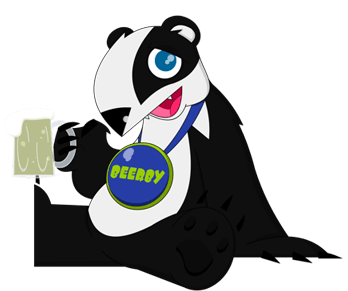 I just wanted to mention the Beerby iPhone app again, and let people know that if you spend a lot of time drinking beer, you deserve to get credit. Beerby is kind of like Foursquare (and in fact is integrated with Foursquare). Instead of recording your location, you record what beer you drank (and optionally, where you drank it). You can friend people and keep up with the beers they are drinking.

Fun little app. If you have the technology and you like beer, give it a try. You can friend me at “paulryburn” on Beerby.

This morning I was discussing Five Guys Burgers, and the possibility of them coming to Memphis (no I haven’t heard anything) on Twitter. Makes me think – what would Burger Heaven look like? Five Guys, In-and-Out Burger, Dyer’s, Whataburger, Huey’s, Steak’n’Shake, and Tops BBQ all on the same street. Oh, and Earnestine & Hazel’s. Can’t forget about the Soul Burger.

If you’re off work Thursday, come down to Beale Street at 3 PM. The Liberty Bowl parade, featuring the Georgia Bulldogs, the UCF Knights, marching bands and sponsors will take place. I’ve been in past years (unfortunately this year I’ll be at work) and the street tends to get PACKED. Actually, if it starts at 3, you oughta get there by 2:30.

Insider tip for our out-of-town guests: Get you a Call-a-Cab at Wet Willie’s. Ice, strawberry Kool-aid, cherry Kool-aid, 190 PGA. Tasty.

Insider tip #2: If you’re driving, you should probably disregard the previous tip.

The answer is YES. Trolley Night will still happen. Many of the shops and galleries will be open with complimentary New Year’s Eve wine, beer and hors d’oeuvres. Free food? Wonder if the Nuh-Uh Girl will show up. There will be plenty of free street parking (good luck finding much of that in the Downtown core on New Year’s Eve). At 9 there will be a ball drop – well, not a ball drop but a trolley drop – to celebrate the coming of the New Year in Nova Scotia.

Trivia night at the Saucer at 7. Team: Let’s all read Wikipedia and study hard! Well, except for one team member who needs to read this article entitled Personal Space: How Close is Too Close instead.

Lunch time. Of all the restaurants I put in Burger Heaven, Steak’n’Shake is the closest to work, so I guess that’s the plan.

If you’re a fan of Georgia or Central Florida, I have a suggestion for tonight: There will be a Liberty Bowl team welcome party at AutoZone Park tonight at 6 PM. $25 admission, and both the ‘Dawgs and the Knights will be there. More info here. The welcome party is one of the first of the Liberty Bowl festival events that will be happening all this week.

Every time I hear the word “DAWG” I think of my friend John D now. Sorry, inside joke.

Other events going on Downtown tonight… the Grizzlies host the Toronto Raptors at 7… Pint Nite at the Flying Saucer with most drafts $3… I’m assuming Spindini is open tonight (not sure of that though) with their half-off pizza and wine… poker night at the Silly Goose, 9 PM… trivia at Huey’s at 9.

Seriously, WellWorx, was this really necessary? 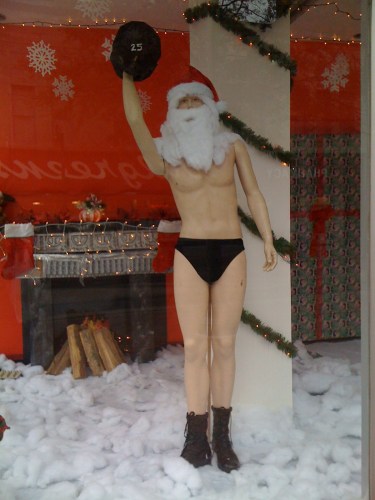 Merry Christmas! I’m typing this post from the Legacy Hotel in Little Rock, wrapping up a 2-day stay here.

I spent much of the past two days setting up and playing with the Christmas present I got my mother – an iPad. I have to admit, up until now I haven’t seen the point of iPads. They seemed like big iPhones without the phone. However, for her, a wireless iPad was perfect – a chance to experience iOS without a monthly phone bill.

Now that I’ve played with it, I can understand their appeal. There are plenty of apps which are written specifically for the iPad, rather than being apps written for the smaller iPhone screen that also work on the iPad. She downloaded the app for the Arkansas Democrat-Gazette, the local newspaper, and within minutes, she was reading the paper on her iPad. I don’t mean, she was surfing the Demo-Gaz’ website reading news stories – she had the actual newspaper, with photos, ads and all. She could zoom in and out, e-mail stories… very cool.

She also got the WeatherBug app. I have WeatherBug on my iPhone, but have to choose from multiple tabs depending on whether I want current conditions, radar, weather photos, or the forecast. The iPad has it all on one screen.

She got a couple of others – CNN’s app, which is designed for the iPad and has lots of photos and video, as well as People magazine which she subscribes to.

Is it enough to make me want an iPad? Not yet. With my apartment already cluttered with a MacBook, netbook and iPhone, I don’t see the need (yet) for a fourth Internet device, especially one that can’t (yet) get on PokerStars and Full Tilt Poker. Definitely going to keep my eye on the iPad though. If the coolness factor goes up I may get one.

Thanks to a sweet friend in Memphis, I also brought my mother a grab bag of perfumes and other goodies, including two fragrances she loved but hadn’t seen in 20 years. She was thrilled.

It’s snowing in Memphis, so I’m going to make an early trip back while the sun is high and bright in the sky. Hopefully that’ll keep snow and ice from sticking to the roads while I’m on them.

I’ll do a blog post about the stuff I did Little Rock later, this afternoon maybe if I get back early.