Tomorrow is International Stout Day, a worldwide celebration of that particular style of beer. The Flying Saucer will be pouring rare beers in observance of this beer holiday. Here’s what will be on the menu: 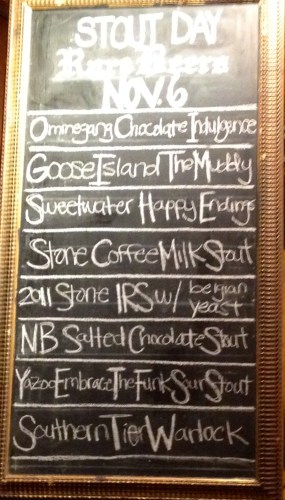 The Orpheum is currently running an online auction, but it ends tomorrow, so if you want anything better get in there quick and bid.

Work on the Harahan Bridge is about to commence. The bridge, which spans across the Mississippi River, is a railroad bridge built about 100 years ago. Lanes were added on the sides to accommodate vehicular traffic until the I-55 bridge was completed after World War II. Construction will renovate the lanes for bike and pedestrian traffic as part of the Main-to-Main project connecting Memphis’ Main Street with West Memphis’ Broadway. On Monday, there will be a celebration at 2 PM at the Church of the River on Virginia Avenue near the bridge. Paul Morris who runs DMC and others will speak.

I want to give a shout-out to a poker game Downtown that I don’t mention enough on this blog: The Wednesday 7:30 game in the Underdog Room (downstairs) at Bardog. People have asked why I don’t play that game much; it isn’t anything against Bardog or poker host Joe, who from what I hear does an excellent job. It’s just that I have a regular bartender I go see at the Silly Goose on Wednesdays. Bardog’s game is free to play and the game usually gets over in two to two and a half hours, giving players who have 8-to-5 jobs plenty of time to get a full night’s sleep. You don’t have to worry about it lasting past midnight the way some games Downtown do. There are weekly prizes and points toward a league final table.

Felicia Suzanne’s will host Banjos & Bonfires on Friday, November 14. The event honors Felicia’s dad, J.W. Willett, who managed to beat cancer and lived cancer-free for several years. It came back, however, and he passed away October 3, 2008. There will be beers, bourbon and bites on the patio for the event. Guests are invited to wear flannel and grow out their beards. Best flannel, beard, and mustache will win prizes. Tickets are $50. Proceeds from the event will go to the Church Health Center. One ticket will cover the cost of two prostate exams.

From High Ground News: Harbor Town Turns 25. Did you know that there was once a proposal for the I-240 loop to go through what is now Harbor Town?

That’s it for now. I’ll be out at the Silly Goose after work eating a bowl of Shorty’s pasta.

We are now within a month of a much-anticipated day Downtown: The Majestic Grille half-price gift card sale. On Wednesday, December 3, you will be able to buy $50 Majestic gift cards for $25. You can buy as many as you want. There are a couple of restrictions: They can’t be used to purchase alcohol, and you can’t use them until after the first of the year. More info here. The cards will be on sale from 8 AM until they run out. PRO TIP: Call in to work, tell them you’re running late, and go in at 8 AM. There’s a chance the cards will run out by lunch hour, and it’s likely they will by the end of the business day. If you can’t be late for work, find someone who will be going to the sale that morning, and have them purchase the cards for you.

The Grizzlies won another one last night, getting off to a 4-0 start for the first time in franchise history. From Bleacher Report: The Grizzlies are the NBA’s most dangerous dark horse. It’s sure looking that way. If they keep up this level of play, Mike Conley, Z-bo, and Gasol could all make it to this season’s All-Star Game.

Meanwhile, the Memphis Tigers football team is just one win away from becoming bowl-eligible. The Tigers play Temple Saturday and are favored to win.

The Orpheum is adding a high-end sound system. It’s the first upgrade to the theater’s sound system since 1983.

From Lifehacker: Tips from a former server on how to get the best service in a restaurant. Most of these are common sense but a lot of people don’t do them.

After a second-place finish and $20 gift card won Sunday night, I will be back at Blind Bear poker tonight at 8 to try and do even better. I doubt tonight will be as interesting as Sunday’s game was though. I will do a little pre-gaming at Flying Saucer and Silly Goose beforehand to get in the right state of mind to play. Time to go run errands, so I’m outta here for now. Possibly a second news post tonight before I get out.

You never know what’s going to happen on Sunday Fun Day in Downtown Memphis. Yesterday I led off the day at Bardog. One of the regulars there had dressed up as a bunny for Halloween. He brought the bunny suit and people took turns putting it on. There are large wooden stairs by the window right now, that were used for people to climb up on the bar for the Halloween costume contest. They haven’t been taken back to storage yet and people got up on the steps and danced, in the bunny suit, in the window. I can’t imagine what tourists thought as they walked by. Maybe every bar in the city should get a dancing bunny. It could be a Memphis thang.

After the bunny crowd left Bardog, I saw a friend of mine check in at Silly Goose, commenting, “Bardog puked and it landed on the Goose,” so I guess that was their next stop.

I’ll be at Bardog this evening for Melissa Monday (happy hour with Melissa), but I’ll be there for an additional reason as well: To see who wins the bike.

Bardog is giving away a New Belgium Fat Tire bike tonight. Since early September, an entry in the drawing has come with each purchase of a Fat Tire. Tonight is the drawing. 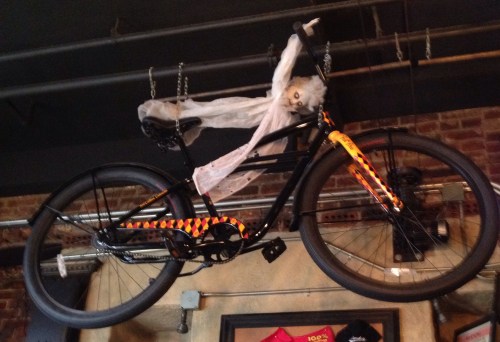 Stumbling Santa has been announced for Saturday, December 6. This is an enormous pub crawl that happens every yea
r to collect toys and money for Porter-Leath. Over 1000 people dress up as Santa and stumble around from one Downtown bar to another all evening. Want to be part of it? Put on your Santa suit (or Mrs. Claus, reindeer, whatever) and bring one or more toys to the Flying Saucer at 7 PM. The Saucer will be the starting and ending point of the crawl; other stops to be announced.

Kinda funny… Grizzlies rookie Jordan Adams missed trick-or-treating because there was a game on Halloween. He tweeted that he hoped someone saved him some candy, and got a response from owner Robert Pera.

The Memphis Business Journal’s BBQ Brackets are down to the Swinal Four. Two of the round of eight matchups were very, very close to a 50-50 tie.

Time to get back to work. I’ll be out at Melissa Monday and Pint Nite at the Saucer after work.

The Mad Earl posted a chart (hope that link works, it’s a Facebook image) of their 17 types of chicken wing sauces. To help you choose, they have the sauces graphed, with “hot” on the x axis and “crazy” on the y axis. There seems to be a sauce for everyone, even Memphis residents who are natives of the planet Zambodia – for them there’s “The Zambodian” with maple syrup and cereal sauce. Burlesque dancer and bingo host Kitty Wompas has a sauce named for her, and from the description it sounds like the one I would be inclined to order, equivalent to extra hot at other wing joints. Bartender Ugly has a spicy BBQ sauce named after him. Their hottest and craziest sauce is called “F-U-J” and Clay claims it will shut up anyone who says that the Mad Earl’s wings are not hot enough. Wings are 75 cents apiece and are discounted to 50 cents on Mondays and when the Grizzlies are playing.

Kooky Canuck is days away from opening its second location at 1250 Germantown Parkway. For those of you out in Cordova who have never been to the downtown location, you’re going to love it. Here are a few of my recommendations:

This is also an excellent place to go if you’re a hockey fan, because the owners are too.

The Loony Bin, the new gallery at 8 South Main, has announced that they will do pet photography starting today. You can make an appointment to bring your pet by to be photographed by professionals.

The Mystery Beer Tub got me again! After getting off work early, I met a buddy at the Silly Goose for happy hour. About 6:30 he went home to change and I went to the Flying Saucer, planning to meet him back at the Goose in a couple of hours. I started with my usual Dos Equis Lager (now $5.50 a pint) then switched to the $2 mystery beer tub that they have every Halloween. My first pull from the tub was a can of Old Milwaukee, my bad luck streak from 2013 continuing. My second pull, however, was a large bottle of beer I didn’t recognize that must have had an ABV of close to 10%. It was delicious but it hit me hard. By the time I got back to the Goose I was out of it and sleepy. Got home pretty early for Halloween.

As usual, I’m leading off at Panda’s bar at Bardog today at 11. This afternoon I will head south for the Memphis Farmers Market’s Barnyard Ball. I still have my extra ticket so text me if interested. Check back, because I plan on posting a sample chapter from my new book before I go out today.