(Edited Friday mid-afternoon: Just found out about another event going on tonight that sounds very promising – the Round 2 semifinals of the Memphis Blues Society challenge, happening at both the Tap Room and the Blues Hall on Beale. Event starts at 7 PM. Finals are tomorrow night, and the winner goes on to the International Blues Challenge next February. For more info about the IBC check out The Blues Foundation’s website.)

Wow. Two and a half days without a post. For me that’s a long time. Been busy dealing with car repairs and a lack of sleep, among other things. Today’s lunchtime post is brought to you by the free Wi-Fi at Sleep Out Louie’s.

There’s a sample ballot for the August 3 election in today’s Commercial Appeal. It’s well worth the time to print it out and study it in advance, so that you’re prepared when you get to the voting machine. That way, you won’t get lost in screen after screen of candidates. Remember, early voting is going on now, and don’t forget to check the boxes next to Steve Cohen and Novella Smith-Arnold when you go in.

The CA also had a review of an Ethiopian restaurant, the Blue Nile. That food looks so good… there’s a pic of an Ethopian combination platter with vegetables, lamb, chicken and beef. Instead of using a fork you scoop it up with flatbread called injera. Reasonable prices too – it says entrees are $9 to $12. Now that the car is out of the shop, I may have to take the drastic step of driving all the way out to East Bumblefuck to give this place a try.

I also read in the CA that Arkansas has banned smoking in most businesses that allow customers under 21. The ban includes most restaurants and some bars. Wow. Wonder if it will come to Tennessee next. I have very mixed feelings about such a ban. I personally think cigarettes are disgusting but it’s something I put up with for the sake of my friends. If such a ban were implemented in Tennessee, it would absolutely kill the vibe at Sleep Out’s. Everyone would be going outside every five minutes for a smoke break. Now that I think about it, I may well be the ONLY regular who doesn’t smoke. If a referendum for a ban came up, I honestly don’t know if I’d vote for it.

Tonight there’s a fund-raiser for the Red Cross at the Happy Mexican from 6 to 8. $10 donation. Door prizes, food and drink specials, and Los Cantadores will perform. The Happy Mexican is on Second, about four blocks south of Beale Street.

Don’t know if I’ll make it to the fund-raiser or not… we’ll see. Later in the evening, I’ll probably hit Big Foot, where I want to try some of the drinks on their new signature drink menu. Even later I may stop by another downtown hotspot, a place that only has one signature drink – a 40.

The only plan I have so far for Saturday is a business meeting at 4:00. Fortunately, I was able to schedule the meeting at the Second Street branch office. Business meetings always go better when you have beer and waitresses.

This is beginning to sound like a broken record, but on Sunday night I’ll be going out to a bar to hear… you guessed it… The Dempseys. I must hold the world record for attending Dempseys shows. Wait, no I don’t, Thomas does. I’m probably second though. Anyway, Sunday will be a special night because I’ll be going to my absolute favorite place to hear the Dempseys play.

And you might be surprised to hear that it’s not a bar where the waitresses wear miniskirts.

And it’s not a bar that has waitresses from Romania.

It’s downtown Huey’s. The first place I ever heard them and in my opinion, the downtown location that offers the best acoustics and the best band/crowd interaction. They haven’t played downtown Huey’s since December.

Trouble is, I may be so drunk Sunday night that I don’t even remember seeing The Dempseys. Of course, I’ll be doing Sunday brunch at Sleep Out’s around noon, and Emma has told me to stick around until 4 for dollar jello shots. She says she’s making twice as many as last week, and all different colors.

Shout out to Meredith, who was at Big Foot Wednesday night. Hang on, let’s post a pic of Meredith: 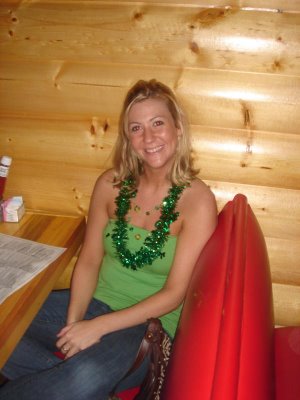 All right. Back to the rat race for four more hours.