Last night I went to the South Main Trolley Art Tour, which this month had an Elvis theme. One thing I learned is that there are Elvis wines, made by Graceland Cellars. You can buy these at various wine shops around the city – visit their website to find out where.

There were also non-Elvis events. Filmmaker Craig Brewer showed a 3-minute trailer of his upcoming movie, “Black Snake Moan,” to be released in February. It was outstanding, starring Samuel L. Jackson and Christina Ricci. From the IMDb entry on the movie: “A God-fearing bluesman (Jackson) takes to a wild young woman (Ricci) who, as a victim of childhood sexual abuse, looks everywhere for love, never quite finding it.” I’m not a movie person normally, but I’ll have to go see this one.

Also, here’s an inside scoop for you: A friend of mine talked to Brewer after the trailer viewing, and told him that he should consider making a stage version, a musical, of his last movie, “Hustle & Flow.” “I’ve thought about that for a while,” Brewer reportedly said.

It was good to see my friend Carmel at Trolley Tour. Hang on, let’s post a pic of Carmel: 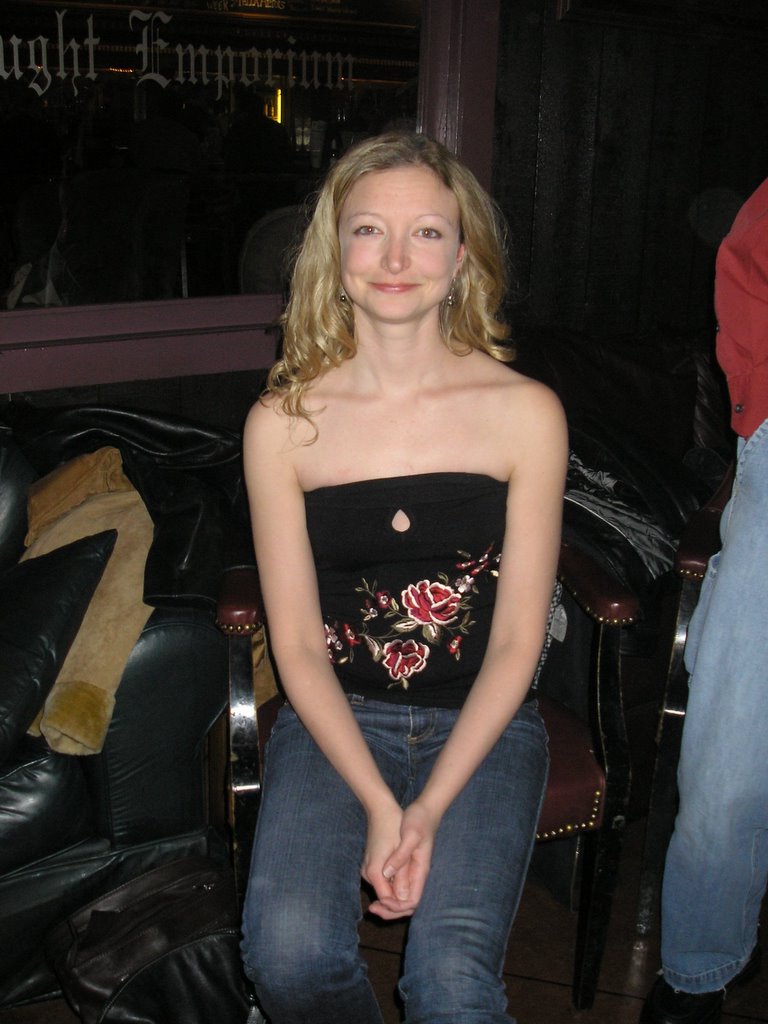 There ya go. That’s Carmel. Carmel reminded me that in addition to Steve Cohen and Novella Smith Arnold, there was one more candidate I had been meaning to endorse in the upcoming election – Evan Nahmias, who is running for a judgeship in the upcoming election. Can’t remember which judgeship and I don’t have my sample ballot handy – just remember to look for his name when you go vote. He’s a young guy with a lot of ideas and he seems to have a lot of compassion. I think he’d do well on the bench.

I also stopped by and saw my friends at American Apparel at the corner of Main and GE Patterson. I’d like to point out that they have a sheer jersey tube top on sale at their online store. Tube Top Month Extended is almost over, but that doesn’t mean you have to stop wearing tube tops – they’re always in season. Heck, Carmel wore a tube top to my plate party, and that was in January.

I’m pleased to announce the opening of a new branch office. As you know, I already have a branch office on Union Avenue, where there’s a guy named Louie who’s always sitting around. I also have a branch office on Second Street, where the employees have an excellent dress code, and where you can get water from 70 different water coolers, and if you don’t like coolers there are 130 varieties of bottled water, and the water tastes a little like beer. Well, next week I will be opening my third branch office… on Germantown Parkway.

“Germantown Parkway?” you ask. “But Paul, that’s in Cordova! East Bumblefuck, as you call it! Why would you open a branch out there?” Well, for one thing, the new branch has the same excellent dress code as the Second Street branch, as well as the 70 different water coolers and 130 different bottled waters. However, the reason it has been named as a branch office is because of its international flair. Starting next week, at the G-town Parkway branch you will be able to get a Belgian beer to drink, and a German platter to eat… served to you by a waitress from Romania.

Speaking of that German platter… one of the reasons I like it is, they have little cards listing the different meats and cheeses you can get on it, and on the card is a picture of a sheep. I like sheep. Not in the same way I like Romanians, mind you. Well, unless I’ve had too much to drink. But we all know I never do that.

The international flavor will probably be lost on the East Bumblefuck patrons though… 200 different beers, and I would just about guarantee you that the most popular one at that location is Bud. “Well, hail, I ain’t gonna try IPAs or porters or hefe-weizens or any of that funky shit,” is likely the attitude. “Budweiser may taste like piss-water, but gosh dern it, it’s American piss water.”

Found a very cool toy to play with… Loki, a program that integrates with Internet Explorer or Firefox. If you’re on a wireless connection, Loki will find you and tell you where you are, and it will give you dining, traffic, weather, and more information for your area. If you travel and have a laptop, this would be an especially useful program to install.

Plans for today… once I get a couple loads of laundry done, I’ll be at either the Union or Second branch office getting some work done. Sigh… I hate working on a Saturday, but I have three consulting projects I’ve been putting off. Not sure what I’ll be doing tonight. If you know of anything interesting going on, let me know.

To borrow a phrase from Philip, y’all have fun and don’t get none on ya.