I’m sitting here having an after-work beer at the Flying Saucer. Abita Purple Haze is the fire sale today, so I’m happy.

This is going to be a pretty boring post. About the most interesting news I have to report is that this morning I was shaving, and – ow! I got nicked! And ow! Again! I thought to myself, what’s wrong here, electric shavers aren’t supposed to do that. When I inspected it I found a hole in the foil screen. So I guess I’ll have to grow a goatee for about a week while I see about ordering a new screen, or if not available, a new shaver. (That’s the only part of my face that will actually grow much hair.) I suppose I could buy a traditional razor to use in the meantime, but that seems an awful lot like work. I suppose I could drive to a store and just buy a new razor rather than ordering online and waiting a week for it to arrive, but again, that seems too much like work.

Let’s see… what else has been going on… the Romanians got me drunk Wednesday night. The laptop that I loaned them wouldn’t connect to the Internet, so I took it for a couple of days and fixed it, then brought it back Wednesday. While I was at their apartment one of them asked, “Paul, would you like something to drink?” and I said sure. So she brought me this coffee cup filled with whiskey over ice. Straight whiskey. God. I haven’t done that since college, and even then I knew it was a bad idea. But anyway, I sipped it and talked with the Romanian who had offered it to me, and eventually some of the others came home and I ended up hanging out and talking with four of the five who are here for the summer – and it was kind of cool, because it was the four who were not here last year. It was nice to get to know them better.

Eventually I reached the end of the cup, and exhibiting the incredible common sense that I’ve been known for since moving downtown a few years ago, I asked, “Got anything else to drink?” This time they brought me a cup of vodka over ice. Now, again, ever since college I’ve known straight vodka is a huge mistake, but that didn’t stop me. By the end of the vodka it was almost 10:00 PM, and one of the Romanians took a card and wrote “DON’T FORGET YOU PROMISED TO TAKE ME TO THE MALL SEPTEMBER 2” and I stuffed the card in my pocket. Probably a smart idea: I doubt I would have remembered my name at that point, much less a promise to drive someone to the mall. Well, at least I can buy a new shaver while I’m out there, if I don’t get it done before then.

So I stumbled down Second to Blues City to see The Dempseys, only to discover that they were going on break right as I arrived. I remember having an in-depth conversation with Brad their guitarist at the back bar, but I can’t remember word one of what was said. All I remember is that he had on an aqua shirt. Oh, and that I tickled the fifth Romanian, who was working there, as she walked by.

Next thing I remember about that night is waking up on my living room couch at 4:13 in the morning. I looked over at my computer desk and saw a styrofoam box full of Huey’s nachos, of which I had apparently eaten one bite before passing out. I considered eating them anyway, but thought better of it since they had been sitting out for over five hours by that point.

One of the waitresses here at the Saucer just came up to me and asked, “Are you writing about how much this place SUCKS?” She’s quitting in two days so she can get away with saying that.

On my way to Trolley Art Tour in a little bit. Not sure what I’ll do after that.

There’s some entertainment going on around town tomorrow which I won’t be going to, but nevertheless is worth checking out. In the morning, the Farmers’ Market will be having a HOT HOT HOT Pepper Festival, with cooking demos by local chefs and an opportunity to share your hot pepper recipes with others. Later in the day, Poison and Cinderella will be performing at the Mud Island Ampitheatre.

I won’t make it to either of those though… been invited to a private party out in the U of M area. That’s right folks, looks like I’ll actually be driving a car on a weekend night.

While I was typing, MySpace legend/Saucer regular Groobie Baby walked up with her friend Tea Bag. Groobie asked me, “Do you still do Tube Top of the Week pictures? Because I have a tube top pic that I would love to be the pic of the week.” I’ve never actually had a feature called Tube Top of the Week, but what the hell, it sounds good, and will be the only thing in this post actually worth looking at. So here ya go: 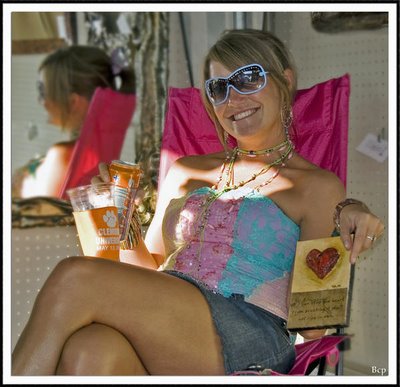 Groobie and Tea Bag then discussed how Tea Bag got her nickname. “You know what part of the male anatomy kind of resembles a tea bag?” Groobie asked. “Well, our sorority sisters nicknamed her that because she likes having that part of her anatomy on her forehead, in her mouth, etc. Tea Bag became much more popular on campus after acquiring the nickname.”

RSDM co-founder Mikey has joined me at the Saucer. Mikey says to tell everyone hello.

Sleep Out Louie’s will have their usual Emma extravganza on Sunday from 4 to close. INSIDE JOKE DEPT: Since about a month and a half ago, some of you have heard me say that I’m going to one of the following: The Flying Saucer, Sleep Out’s, Blues City, Big Foot, Sawaddii, or Conte’s Italian Restaurant, and I may have made the comment, “The food there is going to be really good today.” Well, it looks like the food is going to be especially good at Sleep Out’s on Sunday afternoon/evening. If you know what I mean.

All right. Time to shut this thing down and head to Trolley Tour.