Yesterday afternoon I was (can you guess?) hanging out at the Saucer, playing The Window Game. The recruiter I’ve been talking to called and said, “I’m going to make your day.” And she did. She had a job offer for me. I hadn’t even interviewed in person (just over the phone) with the CTO, but I had gone in and talked to other people in the office, and the CTO was comfortable extending the offer based on what he had heard about me.

Now that the offer is in place, I can tell you a little bit more. This is the job I really wanted out of the ones for which I’d been interviewing. A few reasons why I think this job is going to be awesome:

Does this not sound like a job that is custom-made for me? I’m taking a week to wrap up a few loose ends, and then I’ll start on Monday, November 12.

Unfortunately this means I won’t be able to hit the Saucer at 3 in the afternoon and play The Window Game anymore. Several of us sat in the window from 3 to about 7 yesterday and played. The “bums” category had the others beat by a mile, which is further evidence that the Handling-Panhandling group needs to kick back into high gear.

At 7 Mikey, Otto, John D and I walked over to EP’s for their 1st birthday celebration. Chef Michael Patrick put out a lavish buffet, and he also personally delivered a tray full of goodies to our table. We stuffed ourselves then turned our attention to beer. Thanks Michael for everything and a happy 1st birthday to EP’s. It’s remarkable what they have been able to do with that place. Not only has it become one of the best restaurants Downtown, but it’s also turned into the only dance club on Beale worth going to.

And, it will soon have something new, a neighborhood bar which all the former Sleep Out Louie’s regulars are WAY excited about. It’s called Hoop’s Bar and it will be open in about a week. We got to take a pre-opening look at it last night. Here’s a pic of bartender Tony who will be working there, with John D and me at Hoop’s Bar: 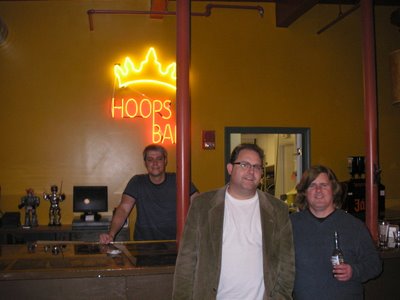 It’s going to have its own private entrance from Second and will cater to locals. The former Sleep Out’s crowd has been calling each other asking, “Is it open yet? When will it be open?” This is the first place to open up Downtown in a long time that has the chance to knock the Saucer out of the #1 spot in my pecking order.

Otto and John D took off, and Mikey and I hung out at the upstairs bar at EP’s for hours. It was kind of nice to have a really long drinking-and-hanging-out session somewhere other than the Saucer. The nightclub crowd started rolling in about 10 and we people-watched. Mikey lasted until about 12:30, and I made it about a half hour past that.

Just downloaded the Halloween pics from the camera. I’ll probably take the laptop to the Second Street branch office once it opens up, and sort out the pics and then post a photo album at some point this afternoon.

The Flying Saucer helpfully put a sign on its front door, informing its patrons of the upcoming time change. According to the Saucer, Daylight Savings Time BEGINS this weekend. 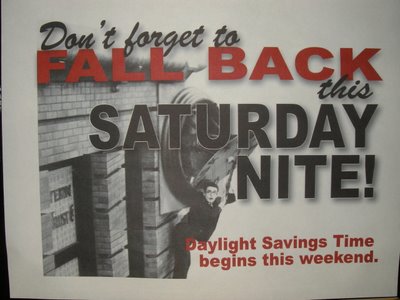 My camera, which I thought had taken its last picture after I dropped it on the floor last night, has come back to life. I popped the spare battery in and it started right up. Apparently the problem was the battery, not the camera itself.

That means there will be a Halloween photo album within the next day or two.

Also means that the bums on the street better watch out, because I’ll be out on bum patrol taking pictures to post to the panhandling website.

All right. Before we get started with last night’s recap and whatever other crap I find to talk about, here are a couple of events I’ve been asked to announce.

– Free food and booze from 5:30-7:00 PM Thursday, November 8 at on the street, which is the Memphis College of Art’s new gallery at 338 S. Main, next door to Raiford’s. Artist Bob Riseling will be on hand to talk about his approach to art, and there will be discounted memberships available to those who want to join Bravo Memphis. RSVP to bravomemphis@hotmail.com by November 7.

– Also, on Monday, November 5 there will be a Mojave/Royer Microphones Listening Session at Ardent Studios, 2000 Madison, presented by the Memphis chapter of The Recording Academy. Hosted by engineers Dusty Wakeman and Jeff Powell. Free food and booze. Space is limited, RSVP to memphis@grammy.com or call 525-1340.

Worked the 4:00 shift yesterday as the Beer Goddess. Notable things that happened while I was at the Saucer:

– Pete was afraid to play a game of pool against me, because he realized that there was a very good chance that he’d get beat by a man in pigtails and a miniskirt.

– What I learned yesterday: Even said jokingly, even said under the guise of a character you’re playing, women will really HATE you if you tell them the Halloween candy they’re eating will turn into cellulite on their ass.

– One of the bartenders had on a bee costume. I asked if she had brothers or sisters who have kids, and she said yes. I pointed out that that made her Aunt Bee.

The gang showed up and about 9:30 we moved on to Big Foot Lodge for their Halloween party. Awesome as always. About midnight they did the costume contest for Most Original and although the voting was extremely close, Mikey and Skippy took the prize (a $300 HD radio) in their Raiford’s costumes.

Then the evening started to suck. I was walking around taking pictures of people, and someone grabbed my arm and the camera fell to the floor. I picked it up and tinkered with it. It took a few more pictures after that, although way more slowly than normal, and then died completely. I decided to go home briefly and try to fix it, and the next thing I knew I woke up on my couch and it was 2:30 in the morning. Apologies to McGuinness and EP’s for not making it to their Halloween parties.

So it looks like my little camera has bitten the dust. That’s a bad thing at this point in time because Mikey and I and a few others had decided to really step up the bum patrols starting today, and now I won’t be able to get pics of them for the Handling-Panhandling forum. And I don’t want to spend several hundred dollars on a new camera until I have regular paychecks coming in from a new job. I could charge it, but I absolutely refuse to use credit cards. I have a camera on my phone, but it isn’t as good.

Tonight: I’ll probably hit the Saucer about 4 and play The Window Game for a few hours, then later in the evening I have a ticket to a private party at EP’s. Purposely skipping lunch today so there’s plenty of room for Chef Michael Patrick’s food.

Not sure if it will remain private all night or open to the public at some point… hope it opens to the public because then I may get to witness the further adventures of Socially Awkward Hot Girl. I went there last Thursday and there was this girl sitting in a chair who just looked SMOKIN’ in the top she had on and a pair of well-fitting jeans. I’m not going to lie, I was drooling, she looked so good. And then she ruined it. She got up and danced. Well, attempted to dance. For some reason ’80s music brings out the worst in people who can’t dance. In just a few seconds she managed to decrease her attractiveness by 99.76%. Please. Don’t. Do. That. Again. It didn’t help that her 3 friends were all excellent dancers, which made her look even worse.

After she finished “dancing” she looked at me for a few minutes, then ran over, mumbled something incoherent except for the word “cake,” then ran away. A few minutes after that she ran back over to me and said, “I’m hot, and you have long wavy hair.” WTF was that? Was that her attempt at a pick-up line or something? What a goofball. That was the most entertaining thing I’ve seen Downtown all year that didn’t involve bums. But then again, she asked me to buy her a shot several times, so I guess it DID involve a bum. Maybe I should upload her picture to the Handling-Panhandling site.

So now it’s November. Seems like from November to February (except around the Christmas season) there’s very little going on. Not sure what I’ll be doing this weekend. There are two excellent bands at the Saucer – West Tennessee Wife Swappers (Friday) and Aquanet (Saturday) – so I’m sure I’ll be there at some point both nights. Kinda feel like sitting at Nate’s upstairs bar at E&H for a while, so I’ll probably wander down that way one night or the other. A run to Raiford’s is always a possibility.

At least there’s one good thing about November… my birthday. Looking at the calendar, I see that it falls on a Sunday Fun Day. Hmmm, that could be interesting. We were discussing the other day how there’s an unusually high number of Scorpios in our group.

You know, it’s funny, but several times a week people ask me, “Are you still teaching at the University of Memphis?” I haven’t taught there since 1999. I guess that’ll always be the job I’m associated with. Of course, I guess I encourage the association. I have my “Professor Paul” nickname on my mug at the Tap Room, my plate at the Saucer, and my Billy Bass at the Fish. It’s the best job I’ve ever had, so I don’t mind if people think I still work there. Sure couldn’t afford to live Downtown if I did though.

Time to hit Publish, make one last attempt at fixing my camera, and head over to Walgreens for discounted Halloween candy.