Heading over to a friend’s condo to watch the Tennessee vs. LSU championship game at 3. Most of the people there are Tennessee fans and it’s an orange-and-white party. I’m really ambivalent toward Tennessee; I’ve never understood why I should root for a team at the entire other end of the state. But then, I have no more reason to root for LSU that Tennessee, and our friend Chuck is cooking his beef brisket for the party. I’m willing to put on orange for brisket.

Leaving at halftime to go change for a progressive party of sorts that I’m attending tonight. There will be photos – camera is on the charger now so it’s good and ready. Attn Camera Nazi: I’m down to one battery, which means about 130 pictures, so we’ll need to pace the picture taking. It’s a private party so I can’t reveal details, but I will say that I will end up the evening at Raiford’s from roughly 11:30 to close. Yes, CLOSE. Anyone reading this who plans to go to Raiford’s tonight will have to deal with my drunk ass, and I do not plan on being on my best behavior.

Weather update: The low tonight is predicted to be only 58. So those of you attending the same party I am may want to take it easy on layering clothing, or you may die of heat exhaustion.

Thanks to my newest MySpace friends, the ’80s cover hair band Aquanet, for sending out a MySpace bulletin letting everyone know about my blog. Looking forward to catching you at the Saucer or elsewhere Downtown sometime soon.

More music news – the British Invasion cover band Jeffrey and the Pacemakers will perform at the Buccaneer (1368 Monroe) tomorrow afternoon from 4 to 7. Here’s a poster for the show:

This band is the brainchild of musician Jeff Golightly, who also plays solo around town doing Beatles covers.

That’s all for now. Gotta run to Walgreens or somewhere nearby and buy a children’s toy to donate.

Here’s the menu for Sunday supper this Sunday at the Majestic Grille from 4 to 8 PM (click for larger image): 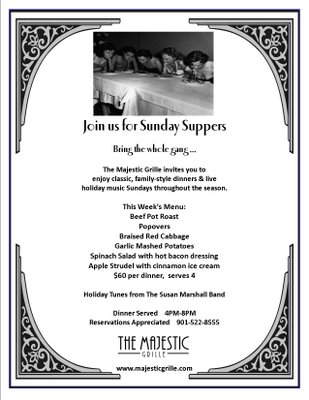 $60 feeds 4 people in a family-style meal, or if you have less than 4 they’ll box the leftovers. The Susan Marshall Band will supply holiday music. 4-8 PM, call 522-4555 to make reservations.

Don’t know if we’ll make it to Sunday supper but we’ll sure be at brunch at the Majestic this Sunday.

I lasted a grand total of one hour at the Saucer and one hour at Trolley Tour before exhaustion set in. Tomorrow’s going to be a big day, so I’m taking a recovery night tonight.