Got out of the house about 2 PM… walked to the Saucer, thinking to myself, “I’ll have one beer, then head to Beale for some prime people watching.”  However, nature had other plans… by the end of the beer it was raining pretty hard, so there wasn’t much point going to Beale.  So I stayed at the Saucer through the running of the Kentucky Derby, hanging out with Lee and Bicycle Bobby and former waitress Adrienne, and knocking some of the most boring beers off my quest for my 3rd plate (Bud, Miller Lite, MGD – all bottles).  By the time the Derby had been run, I was ready for a venue change, so I headed next door to the Silly Goose.

A few more contestants have been added to the Goose’s celebrity burrito-eating contest Tuesday night.  Here’s the updated list: 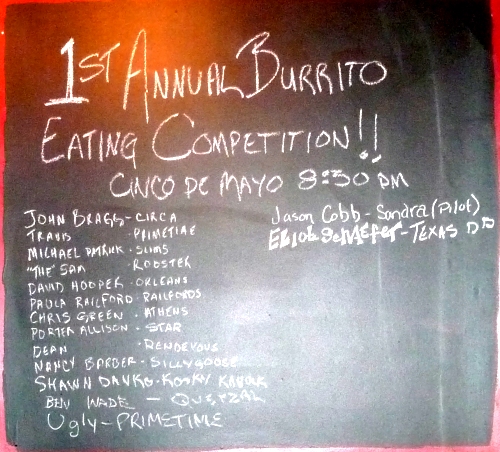 The owners gave me permission to text the Nuh-Uh Girl and invite her to participate, but she wouldn’t do it… too bad, because I think it would be an easy victory for her.

It was still raining as I left the Goose, and I was getting hungry.  “You know, I go to the Voodoo Room in the downstairs of Orleans on Front all the time to see Hoop,” I thought.  “But I never actually go to Orleans to eat.”  So I decided it was time to correct that problem.  I walked over there and got the blackened catfish with red beans and rice. 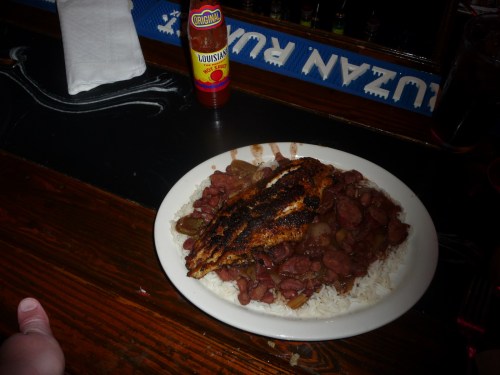 Clint also brought me a sample of shrimp and grits to try, in an attempt to get me over grits-o-phobia I’ve had since childhood.  I must admit, it was pretty good.

They have some good people working there as well… Kenneth who used to work at EP’s is there, as is my friend Brooks who also works at Sauces, and Colin splits his time between Orleans and Voodoo Room.  You know, up until this point Orleans’ bar has never been on my radar as a happy hour destination, but now that I realize I know so many people there, it may have to be.  Besides, they have a lot of good $4 specials on their happy hour menu.

Bardog Tavern is moving their Cinco de Mayo air guitar contest from 6:30 PM to 8 PM on Tuesday the 5th, because Commercial Appeal TV wants to stop by and film it.  Contestants will rock out atop the bar with their best air guitar moves.  There will be specials on Cabo Wabo silver tequila, Mezcal, Corona beers, and margaritas.

Time to get some sleep and get ready to do it all over again in the morning.  The usual routine of Majestic/Saucer just doesn’t feel right for Music Fest weekend… I think I’ll kick the day off with the Bloody Mary bar at the Silly Goose, and play it by ear after that.  Off to bed… hope the people who attended Music Fest today heard enough good music to make up for getting soaked.