Time to download a few pics from the camera.  Let’s see what we’ve got: 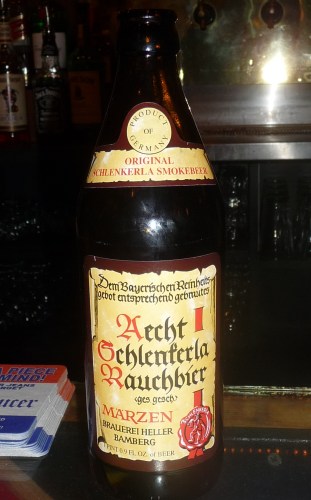 This is what the world has been waiting for:  A beer that tastes like bacon.  They gave me a sample at the Flying Saucer a couple of days ago.  It’s called a “smokebeer.”  I have no idea what the wording on the label says.  If you like bacon and smoked meat, it’s worth a try.  It’s a big bottle – 16.9 oz. I think.  Not sure of the price, but probably somewhere in the neighborhood of $10. 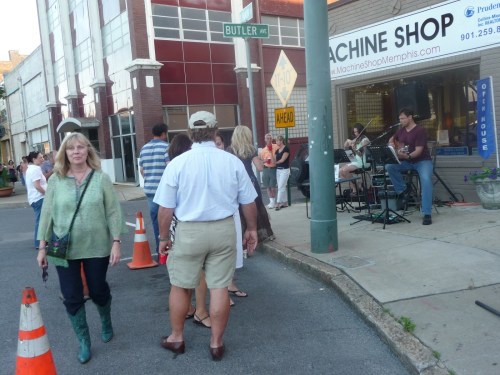 Here’s a pic of Ken and Robyn Greene playing outside the Machine Shop at Trolley Tour last night. 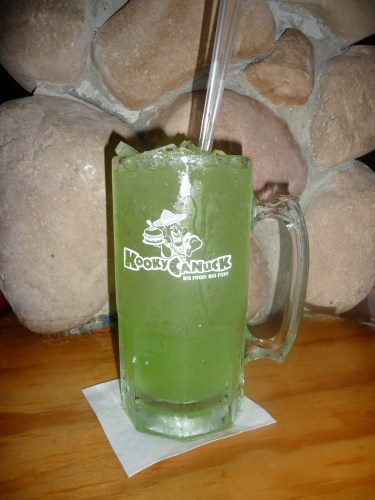 This is the Flying Moose, one of the 34 ounce mixed drinks on the menu at Kooky Canuck.  Normally these sell for $9.99, but if you go in on Tuesday you can get them for $5 each.

Trolley Tour last night was fun, although the crowd was somewhat diminished by Italian Fest going on out east.  If anyone got pics of the Nuh-Uh Girl eating at Italian Fest, please send them to me and I’ll post.

Talked to a member of the Downtown Neighborhood Association last night… apparently the people running the organization resigned, and the board is getting new leaders in place.  For those of you who have been so frustrated by the leadership of DNA since about the beginning of 2007, it may be time to give it a second try.  Guess I’ll renew my dues, although since their meetings are on Thursdays I probably won’t attend until rooftop season ends.

The CA’s Mark Richens has a new blog that is worth a bookmark:  Links to Memphis.  Recent posts discuss the possibility of UFC coming to Memphis, and President Obama mentioning Memphis in his speech on cybersecurity.

Wendell Price, who owned Wendell’s World Beat Grill at 414 S. Main (now Safari), has been indicted on tax evasion and sales tax falsification charges.  He was arrested this week in Texas due to a Crime Stoppers tip.  More info here.

No big plans for the day… may take the laptop to the Saucer this afternoon and work for a while.  I have some ideas for new websites.