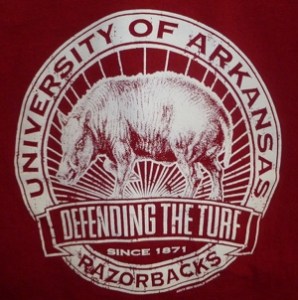 All season long I’ve watched LSU rise to an artificially inflated ranking due to fluke win after fluke win. They’re a good team for sure, worthy of Top 15 especially considering the division they play in, but Top 5? They were overrated. I wasn’t ever worried though. “Just wait until the last game of the season,” I thought. “Bobby Petrino, Ryan Mallett, and the Arkansas Razorbacks will take care of the problem.”

Take care of the problem they did. LSU played well, but a couple of big plays put it away for the Hogs. One was a surprise touchdown pass at the very end of the first half to send Arkansas into the locker room with a 21-14 halftime lead.

In the final minute of the game, LSU fumbled just outside of their own goal line with an 8-point deficit. So much for that miracle touchdown and two-point conversion! The Razorbacks probably could’ve run up another 7 points, but decided to just do the safe thing, down the ball, and call it a game.

Where we go next is up to the SEC championship game, Auburn vs. South Carolina, next Saturday. If Auburn wins, they go to the BCS national title game, and the Hogs would have to be under consideration for the Sugar Bowl. If that does not come to pass, either Capital One or Cotton will be our likely destination.

Still feeling sick. I thought I was over it, but I’m not feeling well for the second night in a row. Eating a pizza I ordered, then will get in bed. Y’all drink some beer for me and hopefully I’ll be out tomorrow.