So, I stepped off the plane in Savannah, walked through the gate, and about 3 seconds later, everyone in the waiting area broke out into applause. I had no idea I had so many fans in Savannah.

The person behind me was a soldier in full camo, and everyone applauded to say “thank you.” Very, very classy. There were about 15 soldiers on my flight.

Got here safe and sound… of course Delta was 30 minutes late into Atlanta, making run through Hartsfield Airport to make my connection. Should’ve known to bring my running shoes, but I didn’t. I wore sandals. Delta being Delta, the connecting flight to Savannah was 30 minutes late too, so it’s all good.

Got checked in, went over to the center and got my pass for the conference. Nothing to do until 6. I guess I’ll walk a few blocks north where there are several pubs and grab some lunch. And, of course, a beer.

All right. Catching up on 97 unread e-mails. Let’s see what’s in there… gonna make this quick.

Peabody Corner Bar is the Memphis Groupon for today. $30 worth of grub for $15. They have a new Cheese Board on the menu, if you’re into trying different kinds of cheeses.

Hmmm… everything else in the inbox can wait, because it’s not time sensitive and I really need to go eat. May post again, depending on time.

Getting ready for a fun-filled weekend. As I’ve mentioned before, my blogging schedule will be anywhere from erratic to non-existent between tomorrow and Sunday. I do plan on tweeting quite a bit from my @paulryburn account, so you can follow me there. If I get a chance to blog I will, but may not have time.

I’ve been asked to mention that the Memphis Farmers Market Harvest Dinner is this Sunday. Details here.

All right… all packed… MacBook is ready to go to Savannah… netbook is staying with a friend… told my apartment management I’ll be gone and they’re having security watch the place… printed out my event ticket and flight info. I think it’s time for a beer! 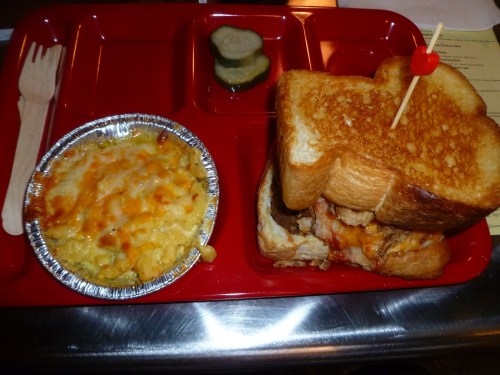 I had to come Downtown for lunch to run a few errands in preparation for my trip tomorrow. I had to eat too, so I stopped at Lunchbox Eats. Today I got the Graduation Burger, not your typical burger. It’s a meatloaf sandwich on white toast, topped with mashed potatoes, pepper jack cheese and Tabasco onions. I added a size of mac & cheese. Here’s a pic of the inside of the sandwich: 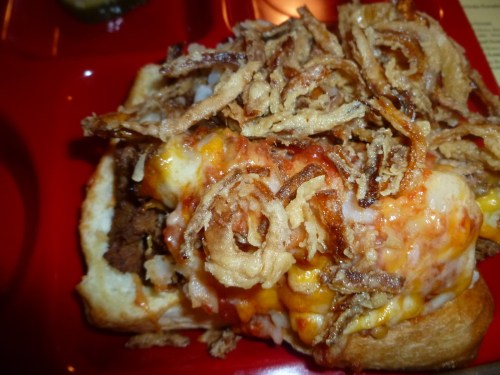 After lunch I stopped by Shelton Clothiers to pick up a couple of shirts I bought Saturday… I needed to have them altered slightly, and the added trip back was enough to steal the mayorship of Shelton on Foursquare.

While eating, I got a direct message from Yuri at Union Street Bath House. He said he had a T-shirt for me, and asked if I could stop by the building. So I did, and a friend of his gave me the shirt. Unfortunately I didn’t get to meet Yuri, as his mother has fallen ill, and he is busy making plans to get to her. Thanks for the shirt and I hope she feels better soon.

Waiting to put a load of laundry in the dryer, then back to work… conference call and last-minute trip planning this afternoon.

If you’re not familiar with the 5 Spot on G.E. Patterson, you should be. You’d never expect the room behind dive bar Earnestine & Hazel’s to be a place to get a fine dinner, but that’s exactly what it is.

It’s open Friday and Saturday nights. The menu changes every night; the chef buys whatever he feels like cooking, and when he runs out, he’s out. For this reason it’s advisable not to go there for a late 9 PM dinner. Here’s a recent menu that was posted on the window. 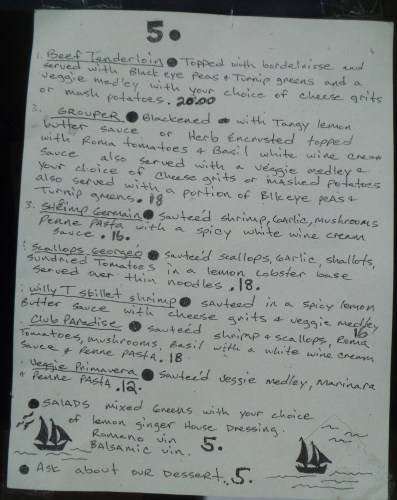 Click the menu to see it at a larger size.

I’ve never heard of any of my friends having a bad meal there. It’s a great spot to take a date for dinner.

Hmmm… how about this for a Downtown date itinerary: Dinner at 8 at 5 Spot, then a trip to E&H to see the upstairs and to have a drink at Nate’s bar. Then a trolley ride north for a drink at the Silly Goose or Automatic Slim’s or the Peabody lobby, then dancing at Paula & Raiford’s or Rehab Disco, then a late-night breakfast at Cockadoos. That offers several options and is bound to impress, and never once do you have set foot on Beale Street.

Eight million a year for Mike Conley. Are you f-ing kidding me. Agreed, he’s gotten better, but with that expense plus the 5 mil we’re paying Thabeet, how are we going to be able to keep the two players who are the heart and soul of the Grizzlies, Zach Randolph and Marc Gasol, when their contracts come up next year? And Mayo too. If we have to deal Randolph for a cheaper power forward, okay, I can live with that, but giving up Gasol would be a major mistake.

As one Twitterer commented, who cares about the Heat’s LeBron James, Dwayne Wade, and Chris Bosh, when we have our own Big Three of Gay, Conley and Thabeet? Eeeeeeeeeee! I are drinking the Griz-Aid!

Well, at least the team’s good this year. You better go see Randolph, Gasol and Mayo while they’re still here, and there’s a great night to do it coming up – Downtown Night with the Grizzlies November 10. For $50 you get a $99 club level ticket to see the Grizzlies play the Dallas Mavericks. You’ll also be invited to a pre-game mixer in the Forum’s exclusive Opus Restaurant from 6 to 7:30, with food and beverages, music, the Grizz Girls, and the chance to talk to a member of Basketball Operations. To get this deal contact Carl Rosen at 901-205-1445 or e-mail crosen@grizzlies.com. This is a really good deal and I plan on being there next Wednesday. Hope to see a lot of my neighbors.

Some of my friends who are in a scooter club had their monthly meeting last night at TJ Mulligan’s Pinch, and they told me that there are some very good deals there for Monday Night Football. They have $1 PBR during the game, and they discount burgers with fries for $3.95. “The burger was so big I couldn’t finish it,” said one person who attended the scooter meeting. Dollar PBR? May have to check that out on a future Monday. They also have a weekly poker game Monday night, with big tables. Anyone know how many chips you start with, and the blind structure?

ArtsMemphis is having a private tour of the STAX Museum Wednesday, November 10 at 6:30 PM. Free for members of their Bravo program, $10 for everyone else. There will be a reception with beer, wine and appetizers prior to the event. If you’ve never toured the museum, this would be a good chance to do it. It’s one of the best museums in the city and is loaded with music memorabilia.

Check out this WMC-TV article about the November 19 Snuggie Pub Crawl. By the way, I saw some Memphis Tigers Snuggies for sale at the Downtown Walgreens if you want to support your team while pub crawling.

Hell’s Kitchen, the cooking reality show starring Chef Gordon Ramsay, will hold a casting call for its next season at the Hard Rock on Beale from 10 AM to 6 PM Wednesday, November 17. Chefs 21 and over who are outspoken and competitive are invited to attend. This will strictly be a meet-and-greet with no cooking involved. The chefs that most impress the producers will be called back for an on-camera interview.

I’ve been watching Season 2 of Jersey Shore on my laptop – MTV has the shows online. I think I’m actually starting to like the characters on the show, the guys anyway. One of my favorite lines:

“DTF.” That has got to be the best acronym ever.

I filled out the paperwork for my fourth plate party at the Flying Saucer last night. My plate will turn dark blue, and I came up with a new saying to replace “No Bums” and before that, “I Love Romanian Girls.” With plate 4 the tab increases to $125, although I noticed a new rule on the form I filled out – $25 of the tab must be food. WTF? Well, I guess that will make the Nuh-Uh Girl happy.

I heard that my Bruce Pearl costume received some very positive air time on the Dan Wolken Show on the radio this morning! Thanks Dan! I had a lot of fun with that costume this weekend. It’s one where I can really get into character.

Halloween’s over and now it’s November. Let’s see what we’ve got today…

Tomorrow is Election Day. Do you know where your polling location is? If not, check out this Lifehacker post. Just put in your home address and it’ll tell you, and it will even link to the list of candidates on the ballot. Pretty cool. It totally takes away the “I don’t know where to go” excuse for not voting.

Found a new Twitter account to follow this morning – @memcrime. It tweets locations of crimes committed around the city. For example, there was a forcible fondling in the 3400 block of Rhodes this morning. Wasn’t me, I promise; I was at work. A note if you follow this account: It tweets a lot. Not surprising, since this is Memphis we’re talking about.

A reminder that tonight is the Majestic Grille’s Jam Jar Jazz Dinner benefitting the Memphis Farmers Market. It’s a vintage family-styled dinner sourced from local farms. Dine while you listen to the big band sound of Jazz Collective. You can check out their Facebook event listing to see the menu. 6-9 PM tonight, advance reservations required – call 522-8555 to make them. $65 speakeasy price (includes booze), $45 temperance price (no booze).

Felicia Suzanne’s will have live music on the patio from 7 to 9 PM Wednesday night, November 3. Hal and Jason from the Plaintiffs will play an acoustic set. Lolonis Chardonnay, Lolonis Cabernet Sauvignon, Estancia Pinot Grigio, and Estancia Pinot Noir for $5 a glass during the show.

Thanks to Kooky Canuck and Bardog Tavern for two fun Halloween parties last night! Weird to drive by Bardog and not see the hearse parked outside anymore.

I’ll be at Pint Nite tonight to drink beers 1, 2, and 3 toward my fifth plate.