There’s a Party in the Park set for Court Square this afternoon from 4 to 7 PM. The main event of the party will be the presentation of the 2013 Downtown Vision Awards to a few folks who have played a big part in making Downtown what it is today. There will also be live music by the Mighty Souls Brass Band and Darren Jay & the Delta Souls, stilt walkers, and glow dancers.

Tonight is also Feed the Soul, a fundraiser for MIFA, tonight at The Warehouse. This is always a fabulous party with live music, bourbon tastings, a silent auction, oxygen bar and more. Your $45 admission supports one of Memphis’ finest causes.

Tonight is the first of four free movie nights put on by the SMA. Movies will be in the grassy lot (the “Ghost Field”) next to Earnestine & Hazel’s on South Main. If it rains, movie will be moved to the Memphis Farmers Market Pavilion. Bring lawn chairs, blankets, dinner and friends. Tonight’s movie is Pitch Perfect. Movies for the next three weeks will be Walk the Line on the 10th, Ghostbusters on the 17th, and Beetlejuice on the 24th.

Last night I was in the Silly Goose and noticed a new item on the menu. “Stoner Pie” is tater tots covered in queso and your choice of chicken, bacon, or chorizo. Sounds tasty and I will give it a try soon.

The @midtownkrogers Twitter account has been un-suspended after the owner changed the profile. It is now clear that the account is a parody and does not really represent the Kroger store on Union. Here’s one of the tweets since the lift of the suspension.

The salad bar is NOT free samples if you need to taste it please ask the deli counter if they give you a bite and they should do it. Thanks!

In the news: Ole Miss football players accused of using gay slurs while heckling student actors putting on a performance of “The Laramie Project.” The play is based on the story of Mathew Shepard, a Wyoming student killed in a hate crime. Sad, but not surprising. Mamas, don’t let your babies grow up to be Rebels.

Tropical Storm Karen has formed in the Gulf and is headed for the coast. Looks like she’ll strengthen briefly to a hurricane and then make fall around Pensacola. She’ll be to the east of us but a cold front will move through and bring storms anyway. High in the 60s and low around 50 Sunday. That might be my first PBR hoodie day of the season.

Time to hit Publish, run a couple of errands, and get back to an afternoon of programming. I’ll be out at the usual spots about 5:30.

Back from a short hiatus from blog posts. Sorry I missed yesterday. I was in the middle of a long, tedious web update at work, and when lunchtime arrived I was too drained and too tired of seeing a computer screen to try and work up a post.

The Blind Bear rolled out its new chef-inspired menu last night, created by new executive chef David Scott Walker. They have a full menu from open until 11 PM, and then a “Hibernation Menu” during the late-night hours of 11 PM to 2 AM. You can view the menu here. (It’s hard to see, but there are left and right arrows on the sides that will let you scroll through the entire 4-page menu.)

I was pleased to see a Scotch Egg on the menu. I haven’t had one since Dan McGuinness closed 5 years ago. For my first meal on the new menu, I decided to give Chef DSW’s Scotch Egg a try. His egg, he told me, is a little different in that it is poached rather than hard-boiled. It’s encased in smoked breakfast sausage, then deep-fried and served on a bed of sauerkraut and topped with IPA mustard and Moody Ques BBQ sauce. 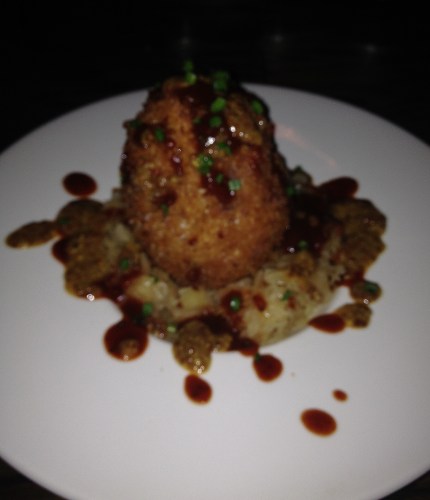 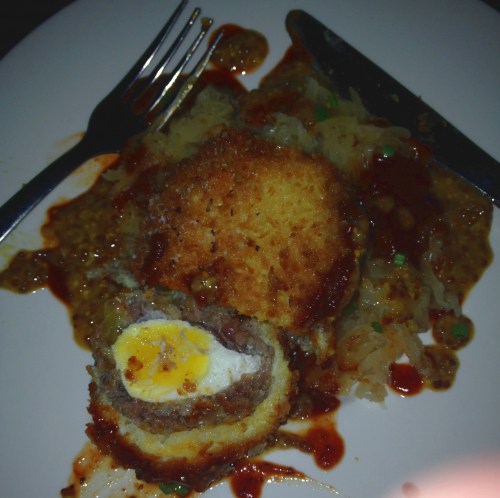 I had PBR with my dinner, but I thought to myself, that Scotch Egg would go great with the apple pie moonshine they sell at the Bear.

Can’t wait to try some of the other new dishes, including the dry rub wings (also with Moody Ques BBQ sauce), the chicken slider topped with kim chi, and the Common Burger. I noticed that the Bear, which has been nearly dead Monday nights, was fairly busy yesterday, so the new menu is making a difference already.

The Church Health Center posted a new article on what the Affordable Care Act means for the health center. In short, they aren’t going anywhere, and will help fill in the holes left by the act to get health care for those in need.

Chef Gary Williams has announced that the original Florida Street location of DeJaVu will be closed for two weeks while they get the new Main Street location launched. Follow him on Twitter at @dejavuchefgary for updates.

If you’re a Tennessee resident, admission to the National Civil Rights Museum is free on Mondays from 3 to 5 PM.

I’ll be at poker at 8 at the Blind Bear. Poker players: Why not show up early and give the new menu a try?