Once a year, neighborhood bar Bardog Tavern at 73 Monroe holds a giant alley party which is a fundraiser for St. Jude. Actually, the past two years it has been more than an alley party: It has gotten so huge that Aldo has had Monroe closed from Front to Main. I don’t know if there was an official fundraising goal they were aiming for, but one bartender told me they were aiming for $40,000.

The fundraising efforts got off to a good start with the Breakaway-Bardog 5K. Last year there were 963 runners. This year: 1170.

The second-largest fundraising component behind the race was a head-shaving challenge: Bartender Amanda “Panda” Parks agreed to shave her head, but only if $10,000 was raised for St. Jude. Things got off to a promising start: By the time I left the bar Saturday night, they were up to $5500 in contributions. 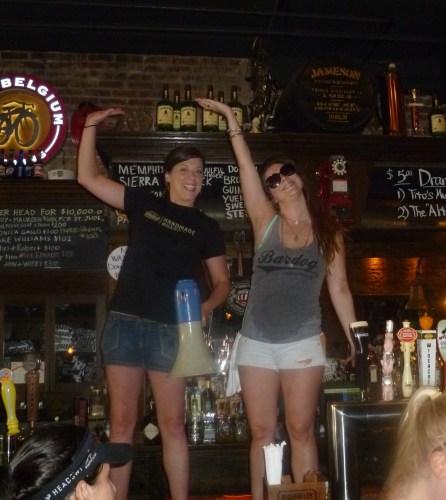 Not long after noon, Bloom (who got her head shaved at the first Bardog alley party) and Panda were on the bar asking for donations to get the remaining $4500. 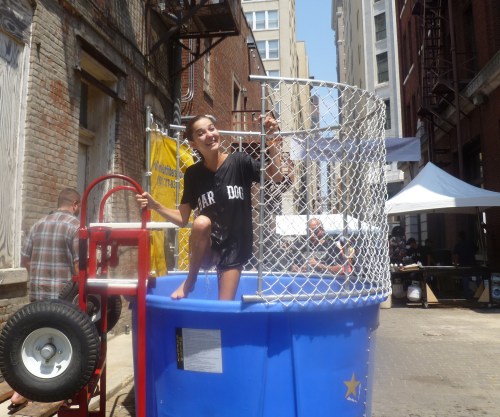 There were other fundraising activities too. People got in a dunk tank and James sold balls to hit the target. Here’s J. Bell after getting dunked. 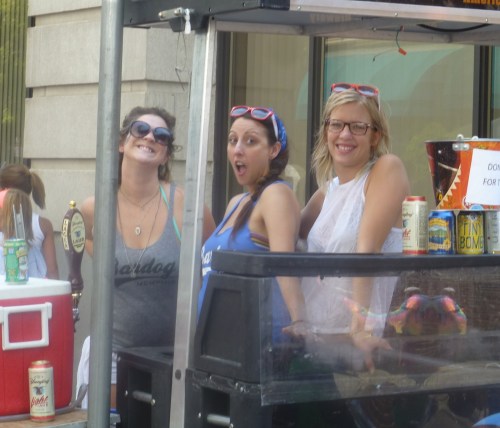 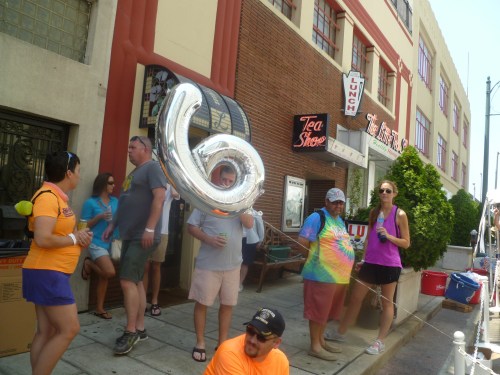 The alley party celebrated the bar’s 6th anniversary. It was windy and sometimes the balloons blew upside down, prompting one person to ask if the party was a celebration of the “69” sexual position. 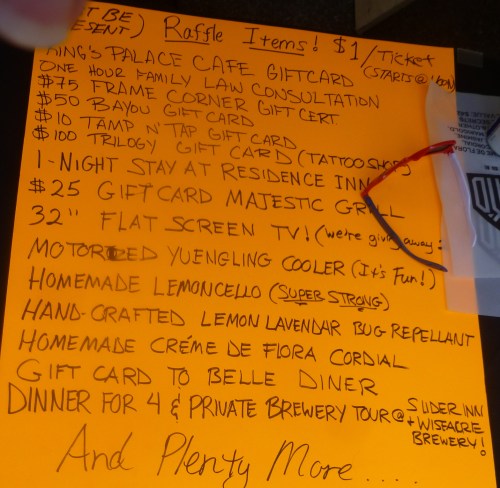 Local businesses donated items to be raffled off for St. Jude. Here’s a partial list of what there was to win. 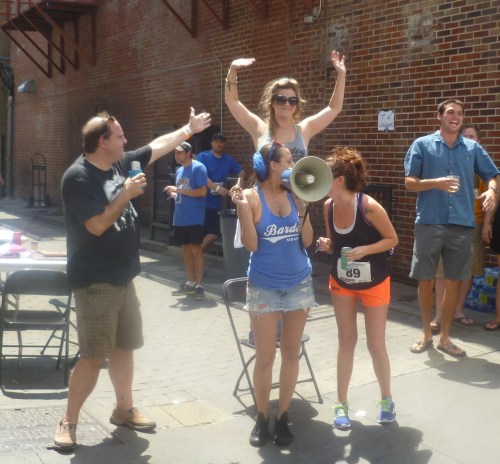 By 2 PM we were still $4000 short of the $10,000 needed to shave Panda’s head with only an hour to go. Fundraising efforts went into overdrive. 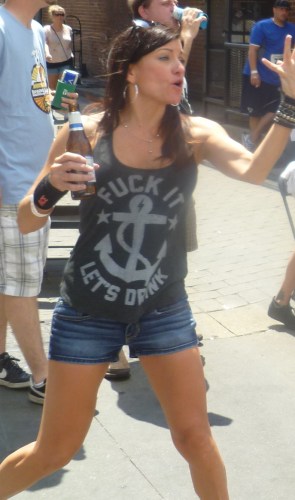 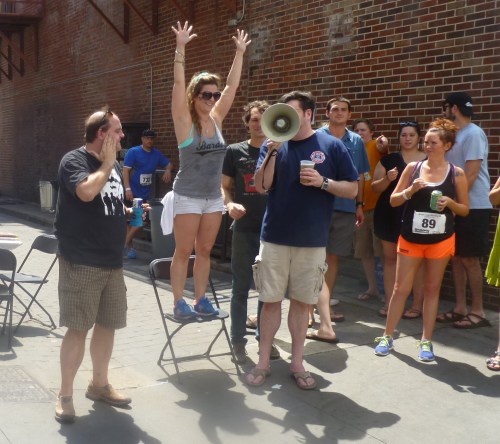 Say what you will about Buddha, but he was the only one who understood how to operate the damn bullhorn. 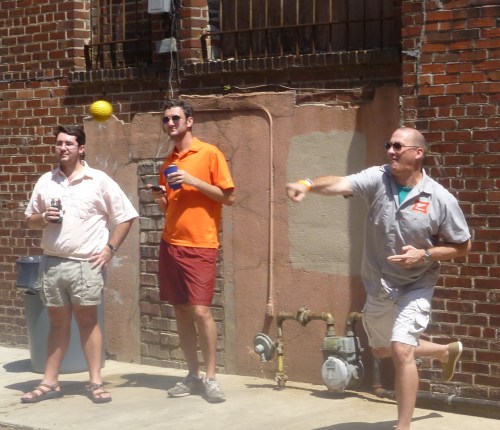 Meanwhile, back at the dunk tank. No baseball team will be drafting Mike. I have seen 7 year old girls throw more accurately.

I do have to say something here, though. I called out Mike’s BBQ team, Squeal Street, publicly on this blog several days ago and they totally stepped up. Not only did Mike donate $100 but two other Squeal Street members donated $500. Well done indeed. 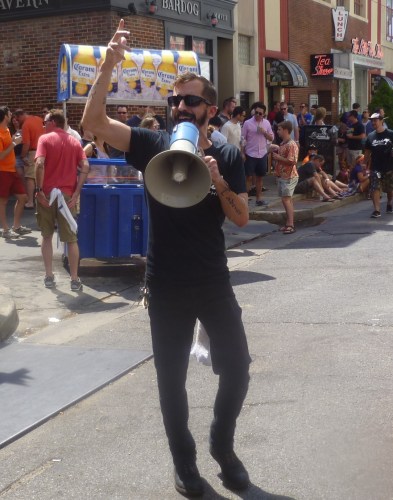 By 2:50, things had turned around and we had less than a thousand to go to shave Panda. However, we only had 10 minutes to raise it. Rory got on the bullhorn and went to work. 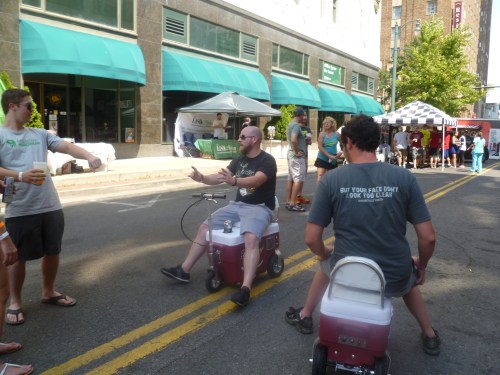 Motorized beer coolers. The ultimate mode of transportation for Downtowners. 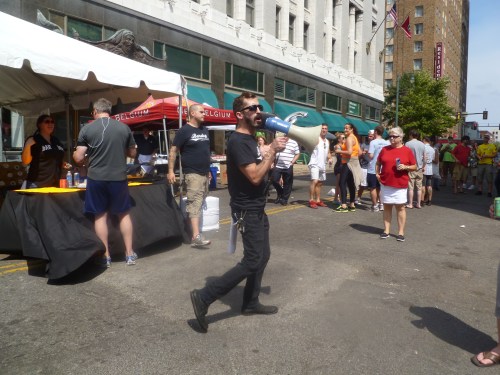 At 3 PM on the dot Rory made the announcement: Ten thousand dollars had been raised for St. Jude. Panda’s head would be shaved! 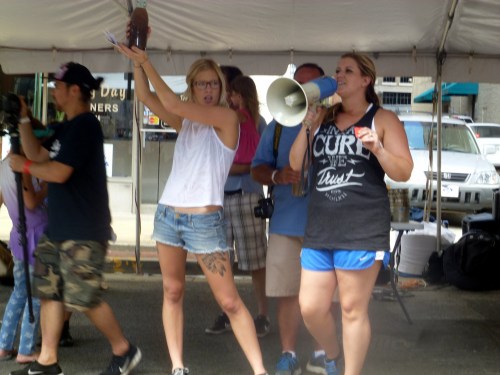 Panda’s hair stylist was a few minutes late so they raffled off some more items to fill up time. When did Maddison start wearing so much clothes? 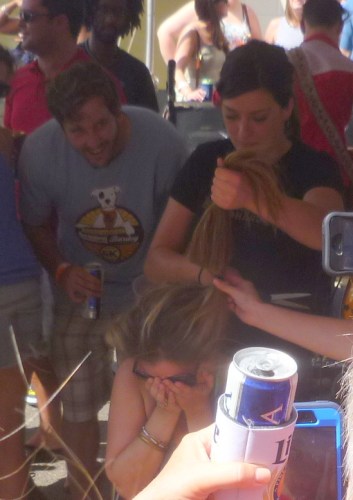 While we were waiting on the stylist to arrive, Bloom got things started by cutting off Panda’s ponytail. Sorry for the poor quality of this photo but a huge crowd had gathered. 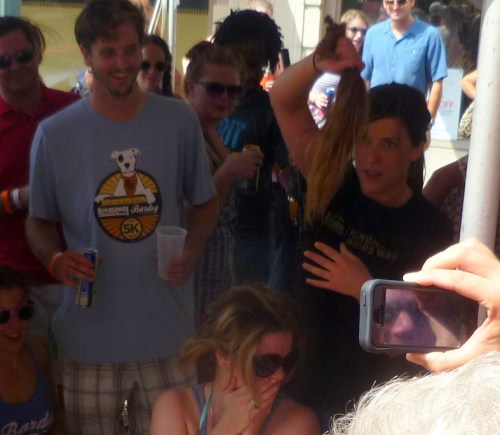 The ponytail was donated to Locks of Love. 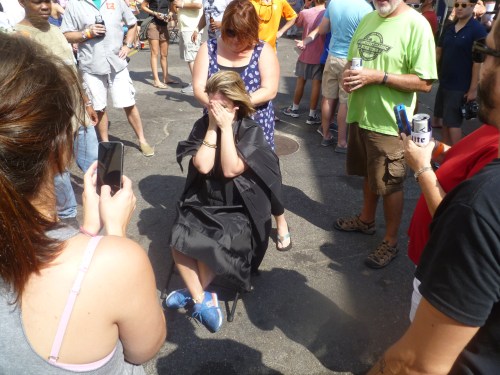 The stylist arrived and got to work. 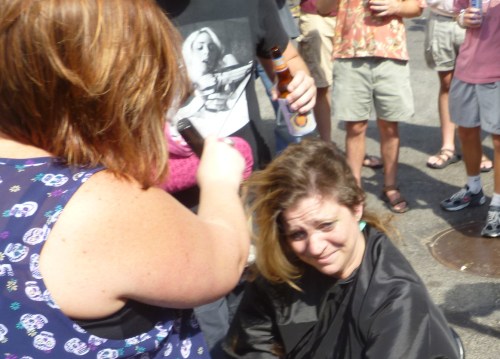 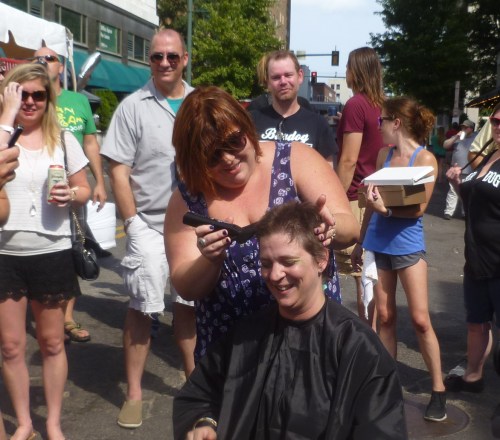 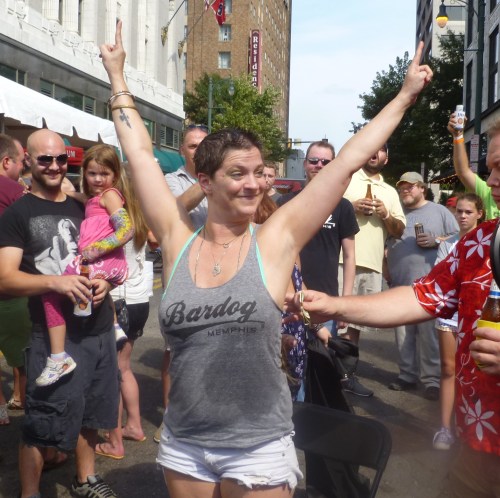 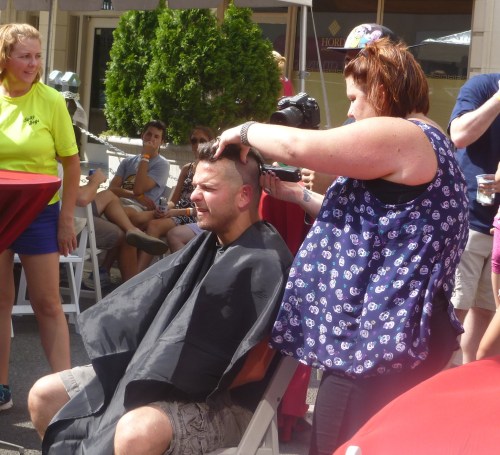 Unfortunately I didn’t get any photos of the meatball eating contest. By 4:00 I was hot and sweaty and dehydrated. I walked down to City Market and got a liter of Vitamin Water Revive. That helped a lot and I came back to the party for a little while, but then I decided that I wanted to be indoors. I went home, took a shower, and went back out.

Before I left, I had a conversation with Aldo. He pointed out that I don’t get paid for my blog. I don’t get paid to cover places or events. That is absolutely true. I write about the alley party because it is an awesome event that brings the community together and supports an important charity. I write about Bardog, and I go to Bardog as much as I do, because I truly enjoy the place. It is a huge asset to Downtown and one of the main reasons I am glad I live here.

After the party was over, the shenanigans really began. Many of us took Monday off, so it was an effective Saturday night for us, except without East Memphis invading all our favorite spots as happens on a real Saturday. I made stops to see Christina at the Saucer and Dusty at the Goose but primarily hung out at the Blind Bear. Buddha came in and showed us the aromatic lavender-scented bug repellent in a Mason jar that he had won in the raffle. You weren’t supposed to open the jar because the scent was so strong. So what did Buddha do? He opened the jar.

The usual Sunday night poker game was going on at the Bear. I stuck with my plan of not playing when I have Monday off from work, but I hung out and observed. As I watched the big table, I noticed that one of the players appeared to be a bit chilly.

Last day of vacation then back to work tomorrow, and back to counting down the days until the next weekend. It will be the last weekend before fall festival season and college football, and as of right now I have ABSOLUTELY NOTHING on my calendar. If anyone has suggestions for things to do let me know.

Thanks to Aldo for a great party, and to Panda for what she did for St. Jude. I have huge respect for Panda and for previous head-shaving victims because it’s something I could never do myself. See you in 2015 for Bardog’s 7th birthday!