Good news for day drinkers: It’s usually hard to find any bars open in the Downtown core on New Year’s Day. After big blowout celebrations New Year’s Eve, most bars close for the day and open at 5 PM (or stay closed until January 2). However, bartender Brittany posted yesterday that Bardog Tavern will open at 8 AM on New Year’s Day, its normal opening time for a Thursday. That is excellent because there is a lot of good football on during the day – Outback Bowl, Cotton Bowl, Citrus Bowl – and people will want a place to go and watch with friends. Also, there are a lot of people (including me) who would rather day drink on the 1st than go out for Amateur Night on the 31st.

If you’re looking for suggestions for what to do New Year’s Eve, Holly has a guide including plenty of Downtown spots. Be sure to read the comments for even more suggestions.

The Liberty Bowl is today at 1. I met some really nice West Virginia fans yesterday, and they asked me where to go to hear “some real live Memphis music, not tourist trap stuff.” Looking at the Downtown Memphis website’s calendar, my top pick for tonight would be Brad Birkedahl and the Burnin’ Love Band, at the Blues City Cafe’s Band Box on Beale near Second. They take the stage at 9:30.

Be careful walking around. Two pedestrians were hit by a drunk driver at Second and Peabody Place yesterday.

Mexi-beer news: Saturday I stopped by the Flying Saucer for a beer, and bartender Cassie said, “Paul, don’t kill me.” I asked why I would want to, and she said, “They took Dos Equis Lager off tap.” I asked what they put in its place, and she said, “Modelo Especial.” That’s an even better beer than Dos Equis Lager, and it is rarely seen on tap in Memphis, although the Saucer has had it in bottles for years. I like the change.

I was there with a friend who wanted to work on the 200 beers toward his plate, so I decided to work on my plate too. I decided to knock out the beers that no one really wants to drink, but that you have to, in order to get to 200. When you print out tickets for beers, the Saucer includes a description of the beer so you can learn about it: Ingredients used, flavor descriptions, interesting facts about the beer. Look at the description for Miller Lite: 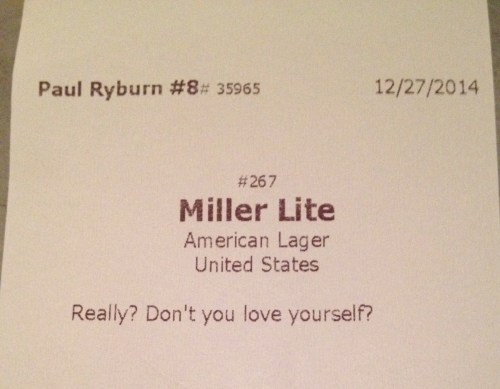 And for Bud Light: 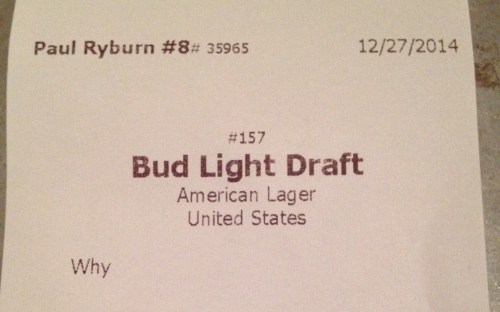 The Chicago Sun-Times has launched local sites for many large cities. I can’t say I’m too impressed with their Memphis site. Check out this article on top wine bars in Memphis. They only managed to find two, and there’s no description of either place, just embedded photos captured from social media. I wonder if they even employ a local writer.

My Arkansas Razorbacks play the Texas Longhorns tonight at 8 in the Texas Bowl. Although both teams are 6-6, I’m optimistic about my Hogs’ chances. Arkansas had several close losses to ranked opposition, whereas Texas suffered several blowout losses including one to the Cougars of BYU who recently lost to Memphis in the Miami Beach Bowl.

That’s it for now. Go Hogs!