I have to take my hat off to the Downtown Memphis Commission and the Chisca on Main for throwing one heck of a successful block party last night. Main was blocked off between MLK Avenue and Pontotoc and there was live music, awards presentations, and free food and beer. The food was GOOD food too: Bardog sliders, Aldo’s Pizza, Stick’em food truck kabobs. Central BBQ had its food truck out, and was serving nachos, sausage and cheese plates, and BBQ sliders. All free. People went to a tent where they were given tickets for free food, and with presentation of valid ID, free beer.

During the awards ceremony, Terence Patterson, the incoming head of the Downtown Memphis Commission, was introduced. The search committee’s goal en route to finding Terence was to find “the twin brother” of Paul Morris who currently runs DMC. “We didn’t find his brother, but we found his cousin,” they said. Sounds like Downtown will remain in good hands in 2016. 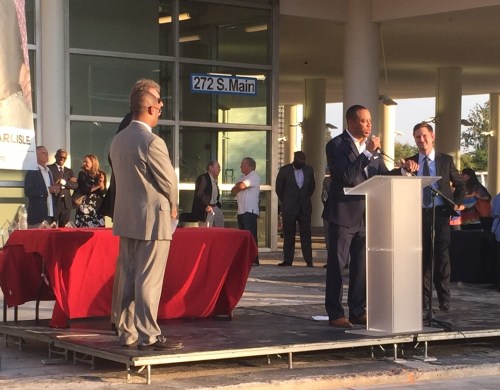 My friends and I toured the back part of the Chisca, the former motor lodge, which has been converted into apartments which are now renting. “Given what that place looks from the outside, the apartments couldn’t be very nice,” I thought. Wrong. The apartments are beautiful and spacious, with wood floors and modern appliances. The 2 bedroom on the northeast corner of the former motor lodge was particularly nice. If anyone is hesitant to live in that building because of what it used to look like on the outside, don’t be.

The Chisca was serving food and beer. I got to try Not Your Father’s Root Beer, the root beer that tastes just like any other root beer but contains 5.9% alcohol. That was really good, so good that it could get me in trouble if I chain-drank them. One was enough to give me a buzz. Thanks to the DMC and Chisca for a fantastic party. By the way, if you don’t get the title of this post, I used to have a neighbor who was famous for showing up at events where there was free food and loading up several heaping plates. “Free food? Wonder if the Nuh-Uh Girl will show up” was a meme on this blog for eight years.

I have some news saved in Drafts, so check back at lunchtime (I normally post around 1) or after work for a news post (If anyone at the Farmers Market is reading this: Where’s the weekly email blast?)