I woke up this morning to find a string of missed texts. Apparently someone had a hissy fit because I don’t respond immediately to texts at 1:40 in the morning. I don’t mention it on this blog much, but I have a hobby I to which I devote some time every day. It’s called “sleeping” and 1:40 AM is often a time spent in pursuit of my hobby.

Yesterday I ranted about women who put their purse on the barstool next to them at crowded bars, selfishly denying those who come in after them a place to sit. Carbunkle Trumpet, a recent New York transplant from Memphis, had this to say: “Here in Gotham the bartenders either knock (the purses) off into the floor or tell the females they will charge them double for their drinks b/c they are taking up 2 spots. They don’t mess around up here. That’s why we love it up here.” Sounds like a great idea to me, one that I wish the bartenders at my favorite Downtown spots would start putting into action. Remember, more available barstools = more people to tip you.

Flight at the corner of Main and Monroe has announced that it will start serving Sunday brunch from 9:30 AM to 2:30 PM. Menu items, in addition to traditional favorites, will include a flight of milk chocolate chip pancakes, French toast, and Belgian waffles and strawberries as well as options including farm fresh eggs such as Filet Mignon Benedict, confit of duck, and the French Quarter Scramble. Among the beverage options will be the Flight Bloody Mary, iced tea with lemon sorbet and Tennessee Coffee. There will be brunch starters and a raw bar as well.

Evelyn and Olive has announced a change to its weekend hours. Starting next weekend the hours will be 11 AM-10 PM Fridays and 4 PM-10 PM Saturdays.

There will be a burlesque show at Earnestine & Hazel’s at 8:30 tonight. I have heard these are a lot of fun and my next-door neighbor is one of the performers. It’s 21 and up with a $10 admission, $20 VIP.

Attorneys and sports agents are said to be astonished at the golden handshake in Josh Pastner’s contract with the University of Memphis. If the university fires Coach P, they will almost certainly have to pay him the full amount remaining, over ten million dollars, whether or not he decides to seek other employment. Agents commented that they would love to get that deal for their client coaches, but most schools won’t even hear of it. The reason for the golden handshake is said to be because in 2013 when Memphis made the round of 32, AD Tom Bowen was told after the NCAA tournament that a Power Five school wanted to talk to Josh. President Shirley Raines told Bowen to do whatever was necessary to go ahead and lock Pastner down. New U of M president David Rudd is not a fan of golden handshakes and let Bowen know there will be no more of them in the future.

The director of development of Roots Memphis Farm Academy, an organization that trains and launches new farmers in the Mid-South, has been reading my blog and knows what a big fan of fresh produce I am. She emailed to tell me that Roots Memphis has a CSA of its own – Community Supported Agriculture, the subscription service where you sign up, pay a fee, and then get locally-grown vegetables delivered to a drop-off point near you once a week. 387 Pantry on South Main is a drop-off point for this CSA, very convenient for Downtowners. It is a 27-week CSA and pickup will be 4 to 7 PM on Wednesdays. Subscribers can pick from three different sizes depending on their vegetable consumption. Sign up here and if you use code 2016FRIEND, your first week of produce is on Roots. Here is the projected availability of crops for the CSA (click to view in larger size): 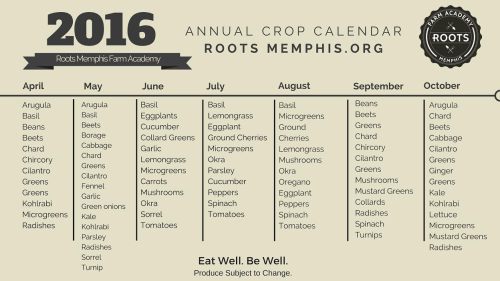 This week in Sports Illustrated, there will be an in-depth story on the alleged sexual assault/sexual discrimination culture in University of Tennessee athletics. The article quotes an attorney who was the UT’s general legal counsel from 1972 to 2008. “The university, in the last several years, has been more concerned with bad p.r. than about taking action to protect its students,” he said. Yes that’s how it sounds to me too. Athletic director Dave Hart needs to be careful not to let the door hit his ass on the way out, and head football coach Butch Jones should be right behind him.

Maybe we should start referring to the team as the Knoxville Predators. I see that a school where men treat women right, Arkansas, takes on the Predators in men’s basketball tonight at 6:30. It’s time to CALL THOSE HOGS!!!

Moody Ques members: Save the date. We’re looking at Saturday, March 19 as the make-up date for our team mixer, our “MEAT & greet” if you will. As you remember, we had one scheduled for February 13, but we decided that having a team event on Valentine’s Day weekend was a bad idea (also it was too damn cold). March 19 is not a holiday (except in San Juan Capistrano, California where it is the day the swallows return). It’s not the date of the Beale Street St. Patrick’s Day parade, which will be March 12 (reminds me, I need to blog about that). It’s still early in the year and won’t conflict with spring festival season. The date is not set in stone yet, but it’s looking like an option.

That’s it for now. I need to get a post typed up about Super Tuesday, so look for that in the next day or two, as well as more news.