Before I get started, let me say happy 40th anniversary to my friends Gary and Boo. When I think of people who make Downtown the special neighborhood that it is, you two are among the first to come to mind. Love you guys.

One Sunday in June 2003, I was hanging out at Sleep Out Louie’s with my friends Kit, Kelly, Shane, Leigh, and Aunt Terry. It had been an extremely long day, but the sun was still up and we didn’t feel like going home. “Let’s go over to the Flying Saucer and throw some darts,” Shane suggested.

The Saucer is known for the girls who work there, but the bartender that night was a man. “We have Sunday Night Swill for a buck fifty,” he told me. “PBR, Schlitz, or Old Mliwaukee for $1.50 a can, and we give you a paper bag to put it in.” I knew from college that Schlitz and Old Milwaukee were pretty nasty, but I was willing to give PBR a try.

“The name’s Jim,” he told me, shaking my hand. Over the next 13 years I would see Saucer girls come and go. Some would only be there a brief time, some for years. They would eventually, though. Through it all, Jim was the constant.

Well, folks, Elvis has left the building. But that’s a good thing.

Yesterday Jim announced that starting in a few weeks, he will be bartending the coach house by the stage at Loflin Yard on Friday and Saturday nights. If Jim has ever served you a beer, go by and see him – and not just to see Jim, but because the yard is one of the neatest spaces in Memphis.

Lunch yesterday was tamales from Maciel’s Tortas and Tacos. 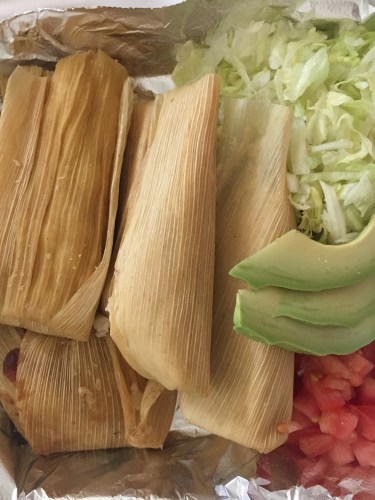 Like everything else at Maciel’s, these are the real deal. Chicken or bell pepper (rajaz) tamales wrapped in corn shucks, with lettuce, tomatoes, and avocado on the side. I ordered two of each, and sides of rice and beans (not pictured). If that sounds like a lot of food, it is. The reason I got so much is that Maciel’s is closed on Sunday, and so I wanted enough to last two days. I’m eating leftovers as I type this post.

I don’t know if I have any vegetarians who read this blog, but on the off-chance that I do, I will mention that the bell pepper tamales were even better than the chicken. Not that carnivores should not branch out and try the rajaz tamale too – you definitely should.

They recently got the second floor open for expanded dining. I will get up there soon and get photos. I should have done it yesterday but my mind was on nothing but tamales.

I will say it one more time – Maciel’s is not a “I hear it’s good, one of these days I will get around to trying it” type of restaurant. It is a GO IMMEDIATELY, YOU ARE MISSING OUT type. The food there really is that good and the prices are quite reasonable. I have friends who eat there five or six times a week.

Joe Walsh is coming to the Mud Island Amphitheatre Saturday, August 13. Along with the former Eagle, JD & The Straight Shot will perform. Tickets go on sale June 3 at 10 AM.

Therapy Session Tour featuring NF with Social Club comes to the New Daisy this evening. Doors at 6, show at 7. Tickets start at $9.

The Redbirds host Fresno in a 2 PM game this afternoon. The first 2500 kids will receive a free ice cream treat.

As expected, yesterday I got to introduce two new customers to the Memphis Farmers Market. They enjoyed the fruits of the Fuel food truck, having a breakfast burrito and some bison tacos. Afterward they bought some strawberries and flowers. Chicken Fried Steak Rodger, one of the Market newcomers, told me yesterday evening that those were about the freshest strawberries he ever had, and he regretted not buying two boxes instead of just one. We also had The Bad, Bad Man with the Smoothie in his Hand times two, as Otto joined us and paid a visit to the So Fresh juice truck. I’ll be back at the Market next Saturday, same Bat-time, same Bat-channel.

By the way… Market customers, if you have never wandered behind the pavilion to where Bluff City Coffee is set up, you need to go check them out. Those pastries looked out of this world! Next week I am going to get in a breakfast kind of mood before I go up there and get a cinnamon roll or muffin or something else yummy.

First stop today is D-RANKS with J-NETTE. I was told last night that B-RAD will be out of pocket. The substitute is more than acceptable, though. It’s time for Sunday Fun Day!