Two years ago, I made a promise to my friend Captain Sparkles. A pilot, he had recently taken a job in Indonesia, and he had brought me a batik shirt from the island country. In return, he asked that I visit Cafe Pontotoc, and if I liked it, to blog about it. “The owners are such nice people,” he told me.

Yesterday it was finally time. Yesterday afternoon I did Tour de South Main, hitting Earnestine & Hazel’s to see what was going on in Clarence’s world, then over to my “home away from home on the south side,” Max’s Sports Bar. On the way back north, I stopped in South of Beale so Kaylea could lay eyes on the man of her dreams for a bit, then continued my walk back to the Downtown core. As I passed Pontotoc, I remembered my unfulfilled promise. “Why not?” I thought. It turned out to be an excellent decision. 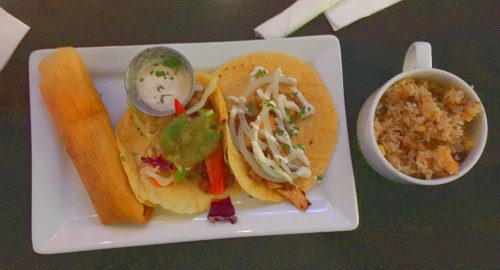 After two days of turkey and ham, this was exactly what the doctor ordered. Delicious and just the right amount of spice. They had a large collection of hot sauces to select from, which I used to spice up my rice and beans.

I asked the bartender for a beer recommendation to pair with my meal. She suggested a couple of options, and I decided on the Wiseacre Ananda IPA. “This would be really good with something cinnamon,” I told her. “I could buy Cinnamon Toast Crunch and have the Ananda with it for breakfast. It would go well with pumpkin pie too.”

After dinner I walked north to the Blind Bear, where I watched the Tennessee-Vanderbilt game with bartender Mac. “Did you ever watch Gomer Pyle USMC growing up?” I asked Mac. He said yes. “Don’t you think Butch Jones looks like the offspring of Sergeant Carter and a special needs child?” Mac went through a range of emotions last night, from laughter at my witty observation to utter dejection as his team lost to Vanderbilt.

From The Onion: Vacationing Man Excited to Try Fast Food Franchise Not Found in Hometown. YES. I remember visiting Austin in 2000, and although it is one of the most vibrant cultural blends in the US, I could not wait to go to Quizno’s, which Memphis did not yet have. I tried the turkey bacon guacamole sandwich, in case you were wondering. I bet there are a lot of people who plan West Coast trips with In & Out Burger being the main reason for their travel.

If you live in Albany, Oregon, you can do yoga with goats. If someone could pass this message on to the people who run Downtown Yoga, I’d appreciate it: Normally your studio is not something that would be on my radar. However, if you offer a “yoga with sheep” class, I am SO THERE. I will sign up for a monthly plan with you!

Tin Roof is doing an Ugly Sweater Ball on Beale Tuesday, December 13. They will have a build your own sweater booth, whatever that means, and there will be live band karaoke and holiday-themed drink specials.

United Against Violence 901 will hold an interfaith prayer vigil tonight at Clayborn Temple at 6 PM. There will be a discussion about the recent outbreaks of violence.

I am issuing a HIDE YOUR FOOD WARNING through midnight tonight. The Nuh-Uh Girl is in town for the holiday and has announced that she will be out for Sunday Fun Day today. If you eat in public Downtown today, don’t be surprised if a girl shows up at your table and says “can I have a bite? :-)” then proceeds to devour two-thirds of your food. If you’re tired of turkey, she will gladly take Thanksgiving leftovers off your hands.

Time for my weekly Sunday school lesson with B-RAD at the Blind Bear. Today’s lesson is about customers who get a couple of mimosas in them and start to feel emboldened and get mouthy. Brad used to have a regular like that, but I ran her off last year and she hasn’t been back since. The Blind Bear should give me a “Director of Quality Control” title. Pay me a dollar a year like the country is going to do with President Cheeto. That would allow me to use my employment to get industry discount on drinks at the other bars.

Time to go embrace the last day of avoiding adulthood for a while! Come join me at D-RANKS with B-RAD!