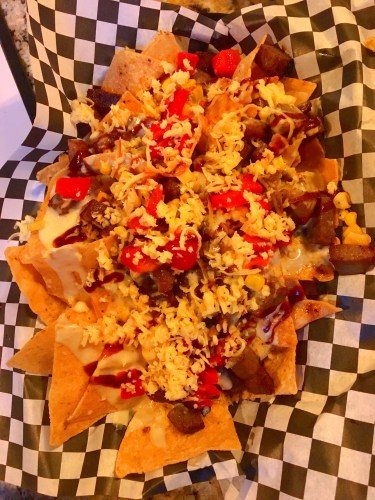 Yesterday evening I stopped by Belle Tavern for a snack. They had nachos for $12. You could get them topped with Tavern chili, brown sugar beef brisket, or pastrami. “Which one should I get?” I asked Q.

“The brown sugar brisket,” she replied.

But for some reason I just wasn’t feeling brown sugar on nachos. “Other two,” I said to Q.

“Pastrami,” she advised, and that was my order.

A big plate of nachos came out about 10 minutes later. At first I wasn’t sure it was pastrami. I always thought of pastrami as a thinly-sliced deli meat (and therefore was wondering how that was going to work on nachos) rather than the bite-sized hunks shown here. Q assured me it was pastrami, and sure enough, it was. I liked it. Something different than the traditional ground beef or chicken nachos (or, given that it’s Memphis, BBQ nachos) that you see many other places. Variety! The nachos are $12 and are big enough to share or to take leftovers home for a second snack later.

High Cotton is having a board game night Tuesday, December 13 in the taproom 5 to 8 PM. It’s an opportunity to de-stress from the holidays. If you bring your own board game, you get a discount pint. Hey, I did a little Amazon surfing and discovered there’s now a Trolls version of Operation! Maybe I will bring that! Don’tcha just love those crazy trolls?

Trolley Stop Market will have a pizza party with Santa and Mrs. Claus Saturday from 5-8 PM. Bring your camera for pictures! Live music, kids’ crafts, pizza specials, and vendors.

Also Saturday, there will be an Urban Art Gallery at the Exchange Building at Second and Madison at 6 PM. Art gallery by Johnny Meant and local photographers, music by Ryan Haskett, open bar (!!!!!), and rooftop access.

Want to learn more about career opportunities and concepts? Love basketball? You need a ticket to the new Memphis Grizzlies Keynote Speaker Series. Ticket package includes entry to an Afternoon Keynote, a Grizzlies game ticket, and a Spalding notebook. Tickets range from $79 to $109.

A car ran off Danny Thomas and slammed into the Pentecostal Temple Church of God yesterday morning. It hit a gas line and caught on fire. The driver died from his injuries and damage to the church was estimated at $107,000 as the fire burned the fellowship hall.

That’s it for now, off to work. I will be late getting out because I am going to do the car shopping I didn’t get done yesterday.