I drove the new car to work today, played around with all the dials on the dashboard. It is the first time I have ever owned a German car, so it’s taking a little while to figure out what everything means. “I’ll just get through the work week,” I thought. “Then on Saturday morning I’ll take it out on the road and get familiar.”

Oops wait a minute. No I won’t.

Saturday is the St. Jude Marathon. Downtowners know that you do not drive a car that morning unless you absolutely have to. So I suppose the Jetta will spend the day getting familiar with its new parking garage home, and I will be at Bardog showing people pictures of the car.

DAMMIT ALL YOU WONDERFUL PEOPLE NEED TO STOP RAISING MILLIONS OF DOLLARS TO SAVE SICK CHILDREN’S LIVES SO I CAN GO PLAY WITH MY CAR!!!!! 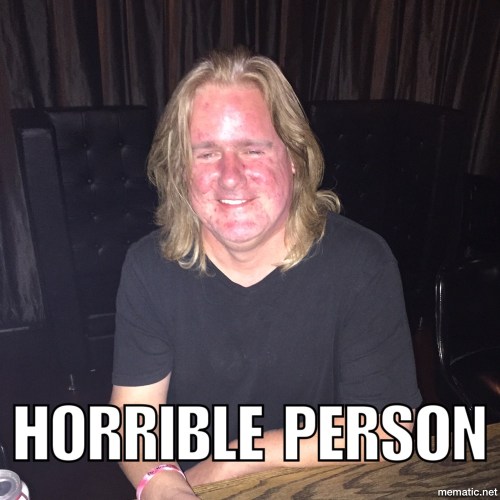 Just kidding. I am so proud of all the people running this race in support of St. Jude. If you are looking to donate in honor of a runner, but don’t know one, may I suggest my BBQ team treasurer Misty? #runmistyrun

Speaking of horrible people, Loflin Yard will host an evening for horrible people Wednesday night, December 7, from 8 to 10 PM. Cards Against Humanity Night will feature the card game for horrible people with Ryan “I can’t believe you just said that” Capebianco as the host. Bring a team or just bring your own horrible self. There’s no cover and no advance sign-up to play.

The following night at Loflin, there will be karaoke in the Coach House with DJ Lil’ Eggroll from 7:30 to 11. It’s not a contest and there is no cover; just come serenade your friends. It’s too bad Robo is not in town to share his rendition of “Cat Who Just Had Its Tail Stepped On Song.” $3 Fireball shots will help inspire you to sing.

Mutts for MIFA will happen tomorrow, Saturday, December 3, from 11 AM to 3 PM at 101 S. Main. Memphis Animal Services will have dog adoptions for only $40. There will be hot chocolate and you can donate to MIFA’s Pet Projects partners. Volunteers for MIFA’s Meals on Wheels program noticed that some of their elderly and disabled clients were saving half their meals for their pets, robbing themselves of needed nutrition. So bring a bag or two of pet food, or a cash donation, for Pet Projects.

Also on Saturday, River Dog Inn, the doggie daycare/boarding house at 248 Court, is having an open house from 2 to 6 PM. Reba Russell, RT Scott and Delta Joe Sanders will perform, and A Southern Delight food truck will be there. Pet photos with Santa, special open house pricing, dog treats, and free giveaways are among the reasons to come.

Congratulations to Flight Restaurant and Wine Bar at Main and Monroe on being named one of the top 100 restaurants in America in the OpenTable Diners’ Choice Awards. The award is derived from over 10 million reviews from diners on OpenTable’s website.

Here’s a list of the best and worst gift cards to give for the 2016 holiday season, based on several criteria. Target’s gift card was rated as the best, with Hallmark’s as the worst.

By the way – I take Peabody Place to work in the mornings, usually hitting the light at Main at 7:35. Wednesday was the morning of the Majestic Grille half-off gift card sale, and the line already stretched out the door all the way to the corner of Peabody Place, 25 minutes before the restaurant opened its doors. I was told that by 8, the line snaked far around the corner, and they sold out before some of the people in line prior to 8 got to buy. Those gift cards are popular! I know there are Downtown managers who buy them by the dozen to give as holiday rewards to employees. Not a bad gift. If you can’t find something you like at the Majestic, you’re just not into food!

There was a question about next Wednesday’s Paying it Forward for Gatlinburg event at High Cotton. Several news sources have reported that Gatlinburg is no longer accepting donations at the time. The taproom manager (who, by the way, like me is a fan of Clarence’s bar at Earnestine & Hazel’s on Saturdays) has been in contact with several groups from East Tennessee, and they have assured her they will accept the donations and spread them around as widely as possible. Baby items, toiletries, and cell phone chargers (many people escaped with their phones, but not their chargers) are among the most needed items.

Tickets for the February 4 Garth Brooks/Trisha Yearwood concert at FedExForum are now on sale. Due to demand, a second show on February 3 has been added. And now a third show the afternoon of the 4th at 3 PM. And now I’m hearing there may be a fourth show.

The new Subway at Second and Union is now open, having had its grand opening Wednesday.

If it’s your first visit to the blog today, read on – my morning post is still news to you. Good luck to all the runners tomorrow.