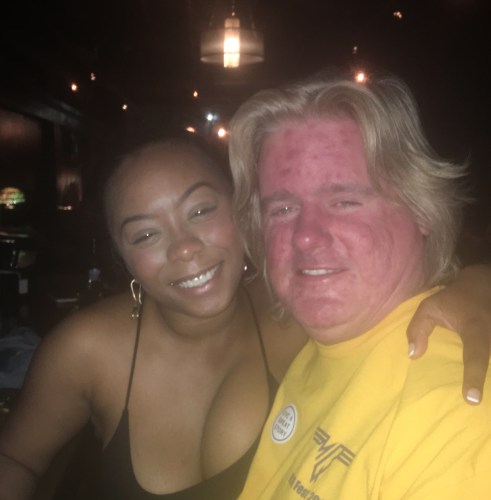 Sometimes I give the troll a day off and take photos with beautiful women instead.

This may be one of the best weekends for Memphis sports ever. Two days after the Memphis Tigers beat Houston, enabling them to write their own ticket going forward, the Memphis Grizzlies beat the Golden State Warriors at FedExForum. The Grizzlies held a large lead for much of the game and Steph Curry threw his mouthpiece out of frustration. That led to him being ejected by a ref, and Kevin Durant argued the call and got ejected too.

Stock & Belle is having an indoor vendor marketplace this coming weekend to celebrate South Main Trolley Night and RiverArtsFest.

A Memphis live music institution is likely no more. The Buccaneer caught on fire last night. From photos on Facebook the damage appears to be quite extensive.

If you drive Downtown on Saturdays, might want to make a note of the map of the Susan G. Komen 5K happening next Saturday the 28th. Expect delays driving.

MATA will start testing the trolleys on the entire stretch of Main Street, 547 N. Main to Central Station, beginning November 6.

I got into a discussion about hot dogs, of all things, yesterday at Blind Bear. Joe told me the best hot dogs in the world are not Chicago hot dogs, but rather ones made in North Carolina – “all the way dogs” with chili, mustard, onions, and slaw. I know members of championship hot dog team Squeal Street read this blog. Perhaps they should make a road trip to NC for inspiration. Joe mentioned Little Richard’s in particular.

The October installment of The River Series at Harbor Town Amphitheatre is this afternoon. DJ Hot Tub Eric at 3, Little Bandit at 4, Coco Hames at 5. $5 donation at the door benefits Maria Montessori School.

Tennessee alum Paul Finebaum: “I would not have let (Butch Jones) get on the plane last night” following the loss to Alabama. Some reports say UT will keep Jones on through the Kentucky game. Finebaum commented that if a win over Kentucky is what the Vols need to legitimize themselves, they might as well shut the whole program down. Shutting down sounds like a mighty fine idea to me. Let’s open up a spot in the SEC for a team with recent victories over Navy and Houston, not to mention a head coach who isn’t the biggest joke in all of the FBS.

Off to do a fundraiser for the Pabst Brewing Co. Back tomorrow with more news.