Smithsonian.com has an excellent article on the 1968 sanitation workers’ strike that brought Dr. Martin Luther King, Jr. to Memphis, as well as how Memphis has progressed since 1968. If you’re a fan of history and/or of Memphis, this article is worth a few minutes of your time to read.

It’s not going to affect us, but a major weather event is brewing off the East Coast today. A storm will bring snow to Florida and Georgia, then will intensify into what weather people call a bomb cyclone in the next 24 hours as it makes its way up the coast. Forecast models have pressure dropping up to 53 millibars in 24 hours, creating hurricane-force winds. Some models have the pressure dropping as low as 950 millibars, comparable to what was seen with Hurricane Sandy. Fortunately it is believed that the worst of the storm will remain out to sea.

This is a great deal! Tickets to a Memphis Hustle game, a Memphis Grizzlies game, and WWE Monday Night Raw all for one low price.

We’re offering an incredible deal this week! For $45 you get to enjoy the @memgrizz, the @MemphisHustle and @WWE Monday Night Raw.

Call 901.888.HOOP to get your tickets now! pic.twitter.com/L4PRWJIgjn

The Brass Door still has tickets available to its women’s only event Saturday 11-2. Boozy yoga, appetizer buffet, a la carte brunch, back and neck massages.

My friend Angela Copeland of Copeland Coaching recently had one of my favorite authors, Joe Navarro, on her podcast recently. Navarro is a body-language expert and will help you understand how to send the right signals with your body in business situations.

Max’s Sports Bar has expanded their list of whiskeys.

When it’s this cold out, you owe it to yourself to warm up with some great whiskey! pic.twitter.com/B4a2F5wAvi

Food Truck Thursday in Court Square has been canceled for tomorrow due to cold weather. The event will return January 11.

A friend of mine posted a link last night, and since his story is similar to mine I wanted to share it too. He commented that his parents gave him a Commodore Vic-20 computer when he was 11 or 12 and it opened up a world of opportunities for him. Same for me, except I got an Atari 400 for my 13th birthday. Code Crew is a great organization that helps make sure kids from all backgrounds in Memphis are opened up to those same opportuntities, providing computer science training, serving as a resource for educators, and spreading the word about the importance of diversity in tech.

Ladies and gentlemen, the president of the United States of America.

North Korean Leader Kim Jong Un just stated that the “Nuclear Button is on his desk at all times.” Will someone from his depleted and food starved regime please inform him that I too have a Nuclear Button, but it is a much bigger & more powerful one than his, and my Button works!

I have no words for this so I’ll just post Brian Klaas’ analysis on CNN. It may be time for Pence to get together with the Cabinet and think about invoking the 25th Amendment.

Now Trump and Bannon are bashing each other… time to pop some popcorn. Back tomorrow with more news.

Well, I guess I lied about more posts to come yesterday. Shortly after I published the New Year’s Eve recap, I saw a tweet that Bardog was serving their brunch menu until 2. For some reason I thought they were one of the bars that didn’t open until 5 on New Year’s. “I better get down there!” I thought, and hurriedly showered and got dressed and enjoyed Monday Fun Day with friends.

The main thing I was going to do in the second post that never happened yesterday was wish Max’s Sports Bar a happy 10th birthday. December 31, 2007 was the day they opened. One of my Facebook friends said it better than I could – the place is the true definition of a neighborhood bar. Congratulations to Max and the staff there and I hope there are many more years to come.

Also a happy birthday, today being the actual day in this case, to my buddy Rahul. I mess with him a bit on here and on social media, but he is a good guy and a true friend.

After Bardog yesterday, I walked over to the Blind Bear and discovered that they had a New Year’s blackeyed peas, collards, and cornbread plate. I got it for my troll so she’ll have good luck this year. 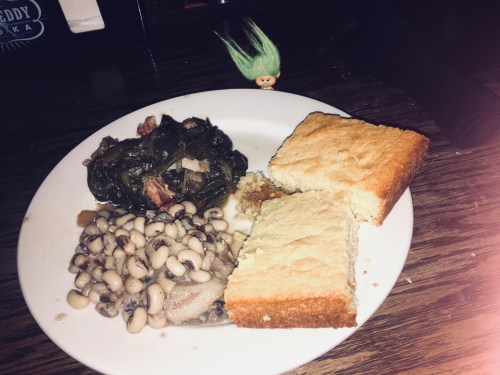 Apologies for not letting my readers know about this special but I didn’t know about it myself until I got there. Here’s a Southern Living article on why we eat blackeyed peas on New Year’s.

The Rendezvous is closed for repairs and vacation this week. It will reopen Tuesday, January 9.

Two teams that lost to Auburn in the regular season are going to play for the national championship. A team that had a perfect season, including a win over Auburn, is not.

This is so bad for college football. Fans are really gonna see thru the farce we call “playoffs” and realize it’s a rigged system designed to benefit the elites.

Back at work. Thinking about taking MLK Day off so I can have one last three-day weekend. Back tomorrow with more news.

After my Nashville plans fell through, I figured I wouldn’t do much for New Year’s Eve. My plans were to do Sunday brunch then go home about 5 and hibernate into the new year. However, things took an unexpected turn Saturday afternoon.

I was sitting at the bar at the Blind Bear Saturday afternoon, my troll standing next to my beer as always. Owner Jeannette, having traded shifts with B-RAD, was tending bar. “Hey Paul, would you be interested in going to dinner with us for New Year’s Eve?” she asked. “A group of us are going to Itta Bena. We have the private room reserved. It seats 25 and so far we only have 16, so you’re welcome to come. After dinner we have the back room reserved here.”

I pulled up Itta Bena’s New Year’s Eve menu on my phone, and it looked good. Four courses with options for each course. Having private rooms at both the restaurant and the bar sounded good too. We’d have a barrier between us and the amateurs who come out to “party” on New Year’s Eve. I told Jeannette I was in. Some of us met up at the Bear a little before 7 and walked over together. Here’s a look at dinner. 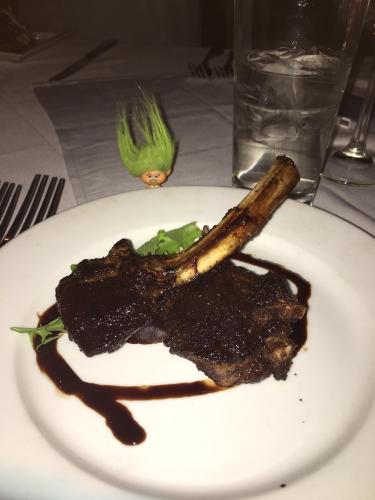 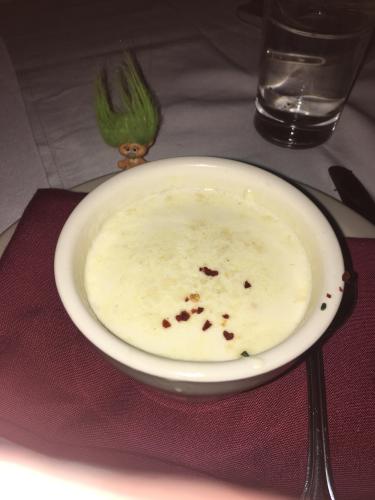 Second course: Itta Bena’s famous She-Crab Soup. This is widely considered to be the must-get item at the restaurant. 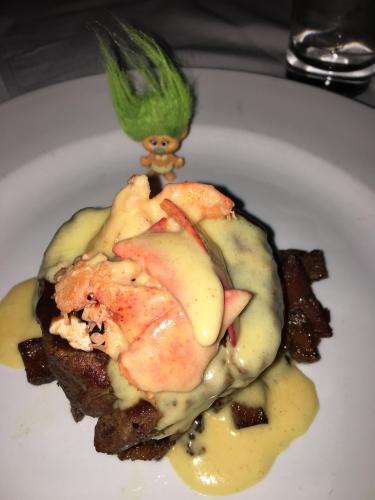 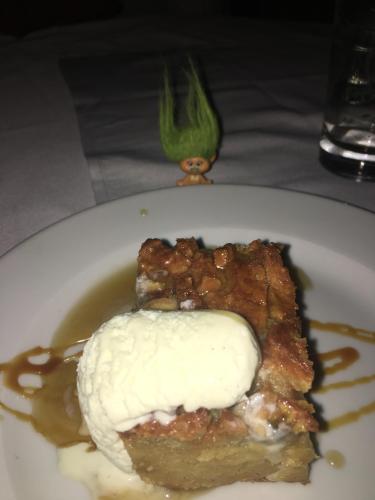 What a great dinner with awesome people. Service was excellent too. Afterward we walked over to the Bear and watched the ball drop in New York City at 11, then rang in the new year in Memphis at midnight. Couldn’t have asked for a better way to start 2018. Happy New Year everyone, and check back because I’m not done posting today.