The Redbirds will be back in town tomorrow for the first game of a 5-day homestand, and you know they’re pulling out all the stops for a July 4 celebration. Before the game, there will be a T-1 flyover from Columbus Air Force Base. Frank Anderson, a 104-year-old World War II veteran, will throw out the first pitch. There will be $2 beers in the Plaza before the game. The Redbirds will be wearing special Fourth of July-themed jerseys which will be auctioned off during the game. High bidder for each jersey gets to go on the field and meet the player or coach who wore the jersey and get an autograph. After the game there will be fireworks, all up close and personal from center field.

For tomorrow night’s game, there will be a special ticket that you can purchase that gets you access to a two-and-a-half hour, all-you can-eat buffet of all-American food: hamburgers, hot dogs, potato chips, cookies, bottled water, and Coca-Cola products.

Memphis is getting a new newspaper called Storyboard. This newspaper will be free and monthly, and the intention is not to compete with the Memphis Flyer, Memphis Business Journal, or Memphis Daily News. It will feature great local coverage by community advocates, the kind of coverage that has been missing since the Commercial Appeal was reduced to practically nothing.

Free concert at Wiseacre tonight. At 8:30, the Dixie Dicks will pull up their pickup into the outdoor pavilion and perform a live concert. This show is intended for mature audiences only (21+). This sounds like the kind of performance my friends Rahul and Tony would enjoy.

I watched the Grizzlies vs. Atlanta Hawks Summer League game last night at the Silly Goose, and #4 pick Jaren Jackson Jr. looked fantastic, scoring 29 points in 23 minutes and draining threes left and right. His totals for rebounding and shots attempted in the paint were a bit low, but I have a feeling the coaching staff told Jackson to make the three ball his main contribution for the opening game. Perhaps in future Summer League games JJJ will be told to focus on other aspects.

Guy sitting next to me at the Goose bet $100 on the game. That’s ballsy, betting on Summer League.

Memphis Escape Rooms are holding a city escape game, departing from their location at South Main and G.E. Patterson, on Saturday, July 21 from 2 to 5. The yellow fever panic of the late 1870s forced 62% of Memphians out of their homes, leaving behind their homes, belongings, and livelihoods. In hopes of restoring the city, one family left behind clues hid all over the city, clues which have gone undiscovered for 140 years. See if you can find them and solve the mystery on the 21st.

The Memphis Flyer and the Tennessee Beef Council are having a Rescue My Grill contest. Send in photos of your oldest, ugliest, dirtiest, most hopeless grill, captioned with what you would like to cook on your grill if you had it rescued. The winner will get a prize pack that includes a 22″ Weber grill, spatula/tongs, spice pack, Guide to Summer grilling recipe brochure, charcoal, and a $50 Beef Gift Card. Enter your photo before 8 PM on July 4, and voting will begin on July 6.

The Dirty Crow Inn is altering their Wednesday music schedule tomorrow, moving Bobbie & Keith to 4-7 PM so those who want to watch fireworks will have time.

Local BBQ team Squeal Street BBQ got their logo (which was printed on a hat) on the Today Show this morning.

I stopped by Bardog Tavern for a Deluxe Grilled Cheese last night, and they have their chalkboard sign up for the Breakaway-Bardog 5K and Monroe Avenue Fest to be held on Sunday, August 19.

That link is runpartyeat.com. This is one of Downtown’s greatest street parties of the late summer, with a beer garden, food, a dunk tank, a raffle for fabulous prizes by great Memphis businesses, a meatball eating contest, and a head shaving. All of these things are to raise money for the kids of St. Jude, and in the years Bardog has been throwing these parties a total of over $200,000 has been raised. This should be an especially big party because Bardog will be celebrating its 10th anniversary.

Looking for a place to watch the Nathan’s Hot Dog Eating Contest tomorrow at 11 AM? I would suggest Kooky Canuck, where many of the competitive eaters have stopped by to take on the giant Kookamonga burger.

Carolina Watershed tweeted that they will be closed on the Fourth.

That’s the news for now. Effective weekend night for me with work closed tomorrow! I haven’t yet decided if the core or South Main will be in my plans tonight. Back tomorrow with more news.

NBA Summer League begins today, and the Grizzlies will have a team out there including draftees Jaren Jackson Jr. and Jevon Carter. Grizzly Bear Blues has all the info you need to know about Summer League, including the roster, how to watch, and storylines to follow.

The Orpheum Summer Movie Series kicks off tomorrow, Tuesday, July 3 at 7 PM with a showing of Independence Day. Doors open at 6 for fun activities in the lobby, including a photo booth and movie-themed drink specials.

The Mud Island River Park Independence Day celebration happens from 4 to 11 PM Wednesday, July 4. Lawn chairs and picnic baskets welcome. Live music by 5th Kind-Memphis, free rides for the kids, food and drink concessions, splash pad, and of course fireworks. This year they are offering something new, the chance to watch fireworks from the water. Launching from the cobblestone landing, you can rent a canoe or kayak for $20 an hour. You can bring your own for a $10 launch fee. Fireworks will start at 9:15.

What we learned this weekend: If you want to land a job, blow in a man’s ear. Lance Stephenson, who once blew in the ear of his new teammate LeBron James, has signed a 1-year deal with the Los Angeles Lakers.

The Orpheum is hiring a vice-president of development.

That’s all I’ve got for now. Back tomorrow with more news.

Yesterday I got to enjoy one of the great smells of Memphis. 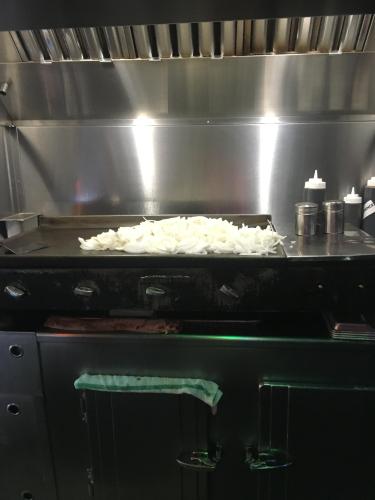 I was on my way to the Farmers Market when I noticed the door to Earnestine & Hazel’s was ajar and onions were on the grill. Clarence was preparing onions for the day’s Soul Burgers. I decided to move the Farmers Market back on the agenda and lead off at E&H. Once I had a PBR in my hand, I turned my attention to the bar’s legendary jukebox. 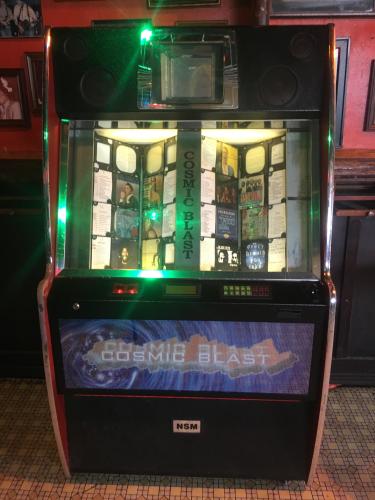 You know, the jukebox has 100 CDs which means there are about 1200-1300 songs to choose from, but it seems that the same tired old songs get played over and over again. I was determined to pick something different. The first CD I saw was Donna Summer’s Endless Summer, and I decided it was time for a disco party!

From the Summer album I played “Last Dance,” “Hot Stuff” (RIP Eddie Gilbert), and “Bad Girls.” I played “Upside Down” by Diana Ross, “Dancing Machine” by Michael Jackson, and “I Want You Back” by the Jackson 5. From the Kool & the Gang CD I played “Fresh” and “It’s Too Hot” (a very appropriate song given yesterday’s blazing heat). I played some Aretha too although that technically doesn’t count as disco. A great Saturday morning! I still plan on Bardog being my main spot on Saturdays, but maybe once a month I’ll do the south loop and hit Earnestine and Hazel’s. Maybe the last Saturday of every month while the Farmers Market is in season.

Stop number two was Max’s Sports Bar, but I could only stay for a couple of PBRs. The Farmers Market was set to close at 1 and I had to get by there and check in on Swarm to defend my mayorship.

With an hour to kill before the BBQ meeting, I decided it was time to get something to eat. I walked south to Loflin Yard, where this happened. 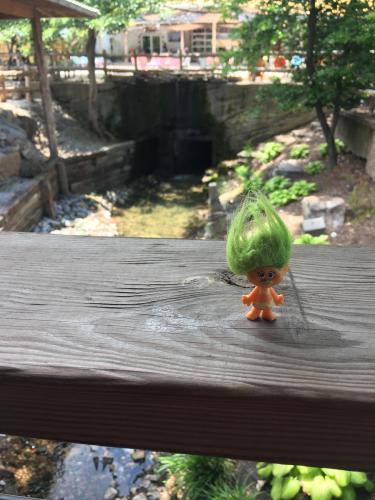 “Can I go stand under the bridge, Paul?”

I should have known better than to take a troll to Loflin Yard. It’s her instinct to want to go do that. I wouldn’t let her though.

Her day improved when the salmon croquettes I ordered came out. The troll likes foods that are the same color as her hair, so she was really excited about the greens. The salmon croquettes, available on Loflin’s brunch menu 10 to 3 and Saturday and Sunday, were excellent. They had my food out fast. I ordered a PBR and handed the bartender a 5 and he gave me three quarters back. $4.25 for a PBR?

After Loflin I walked over to South End for our BBQ debriefing meeting. In the news: RAWK’n Grub has a new burger for the Memphis Flyer. RAWK’n Grub has moved their operation inside the Citgo at 630 N. Highland, but don’t let the location stop you from trying their outstanding food.

Time for D-RANKS with B-RAD at Pontotoc Lounge. Back tomorrow with more news.