The bocce ball court at South Main and Talbot is no more. 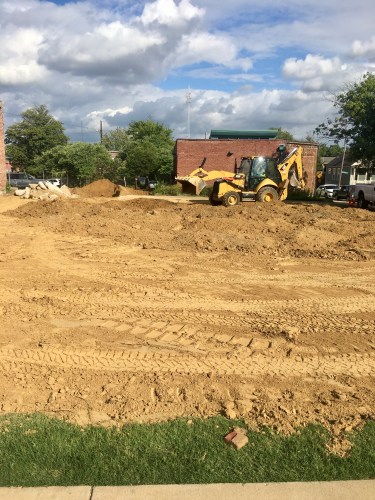 Weep not for the bocce ball court, however; it’s being dug up for the best of reasons. The building you see in the background will become Slider Out, the second Slider Inn location. Like the original, Slider Out will have a huge patio area that will seat 100.

The bocce ball court was never meant to be permanent. It was an improvement to South Main, transforming a blighted vacant lot into something that looked nice and that area residents and visitors could enjoy, until the time came when someone purchased the lot to build something permanent there.

I passed by the lot last night on the way to Max’s Sports Bar to watch the second week of their cornhole tournament. 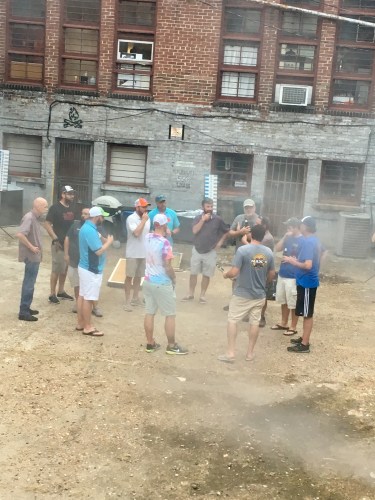 Prior to the start of the matches, Max went over the rules and announced which teams were playing on which boards. 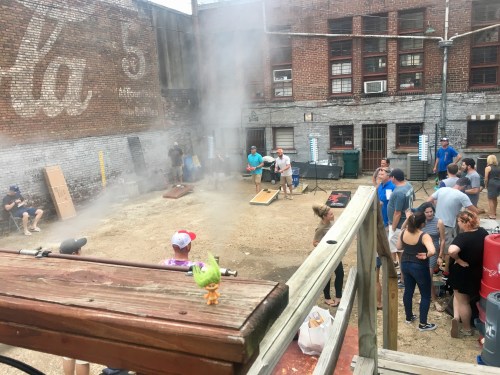 My troll wanted us to enter the cornhole tournament as a team. I had to point out to her that 1) we missed the entry deadline and 2) her arms don’t move, so she can’t throw.

On to the news. This month’s Downtown Neighborhood Association meeting, set for Tuesday, August 28 at the Redbirds Club at AutoZone Park, is going to be a huge one. It will feature a panel of experts on Memphis sports. Master of Ceremonies will be Geoff Calkins of The Daily Memphian. Other panelists will include Eli Savoie of Real Sports Talk WHBQ; Chris Vernon of Grind City Media, host of the Chris Vernon Show; Gary Unger, president and CEO of the Memphis Redbirds; and Mike Miller, assistant coach of the Memphis Tigers men’s basketball team. There will be a cash bar and light snacks will be provided. 6:00 social, 6:30 presentation. This event is free for DNA members and $10 for visitors.

The New Daisy will host a free concert put on by the Tennessee Department of Tourism Development on September 15. The Six Degrees to Tennessee Roots Jam will feature Grammy-winners The Roots along with Elle King, Dustin Lynch, Estelle, JJ Julius Son from Kaleo, and The Isley Brothers. The concert will coincide with a new Rolling Stone search engine, that when you search for an artist, it reveals how many degrees of separation they are from Tennessee.

The Redbirds will offer a specialty ticket in conjunction with Aldo’s Pizza Pies on Saturday. With the ticket, you get a 22-ounce Redbirds logo mug. You can get it filled up with bottomless soft drinks at the game. You also get a coupon for a slice of Aldo’s pizza, redeemable at the Downtown or Midtown location. Also, through September 3 you can bring the mug to Aldo’s for $3 draft beers, $3 ice cream floats, or $1 sodas.

The Memphis International Auto Show will return to the Cook Convention Center September 21-23.

This isn’t Downtown news, but for those of you who like international food, head over to Crosstown Concourse. A new restaurant called Global Cafe is serving food from Nepal, Syria, and Sudan.

There will be a Leaf Dish Class by Erica Bodine Pottery at the Memphis Made taproom this Sunday at 2:30. Each student will impress a leaf into clay. $35 per person. The leaf dishes will be made Sunday, glazed September 2, and picked up September 9.

That’s the news for today. Now let’s get on to the good stuff.

Paul Manafort had been on trial for 18 criminal charges. The jury returned a guilty verdict on 8 of the charges, related to tax fraud and bank fraud, and a mistrial was declared on the other 10. The mistrial most likely doesn’t matter. The 8 convictions are likely to be enough to put Paulie Walnuts in prison for the rest of his miserable life. Remember also that he still has another trial coming in September, facing even more charges.

If this were the only news item of the day, it would be a pretty terrible day for President Trump. True, the crimes weren’t related to Russia, and they occurred before Manafort worked on Trump’s campaign. However, Manafort was Trump’s campaign manager for three months, showing that Trump does not hire “the best people” as he claims. It also is further proof that Special Counsel Mueller’s investigation is not a “witch hunt.”

The really bad news for Trump is the other shoe that dropped yesterday. Michael Cohen, for years Trump’s personal lawyer and “fixer,” entered a plea deal, admitting guilt to 8 criminal charges. Two of the charges were related to illegal campaign contributions. The judge asked Cohen to describe each crime he committed. For the campaign finance violations, he could have simply said he “conspired with one or more members of the campaign.” But he didn’t. He said he made the illegal contributions “in coordination with, and at the direction of” a candidate for federal office. Cohen only has three clients, and the other two weren’t running for federal office. BAM. For the first time, Donald Trump has been directly implicated in crimes.

Plus, Cohen has said he will not accept a pardon if offered one, and he is willing to talk to Mueller. He has also indicated that he has information related to whether Trump knew about, and actively encouraged, hacking in the 2016 election.

I’m excited. I truly believe we are seeing the beginning of the end of this corrupt administration.

All right. I’m tired of writing. Back tomorrow with more news.