Yesterday afternoon I had just brought home Aldo’s pizza. My plan was to eat my two slices, take a “halftime” nap, then get out again about 11 or midnight. Then my BBQ teammate Jeremy texted me. He and his wife Jeana and a friend of theirs had an extra ticket to see Willie Nelson at the Orpheum. Did I want to go?

Initially I texted back, “Nah I just got food and I’m too tired” and Jeremy replied that they were at the Silly Goose if I wanted to join them as they engaged in some pre-Willie shenanigans. As I ate, I thought, what am I doing, turning an offer like that down? Willie is a living legend. He’s pretty much the last one left from his generation, other than Jerry Lee Lewis. I hurried finishing my pizza and walked over to the Goose to see if they’d given away the ticket yet. They hadn’t, and we were off to the Orpheum. 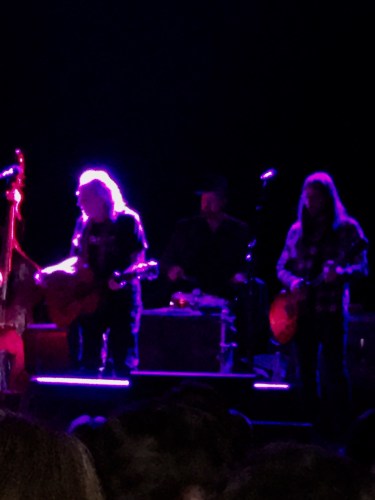 We had sixth row seats, right in the center. That’s Willie on the left and his son on the right. I didn’t know most of his songs but the man still has it at 85. He opened with “Whiskey River,” which I’ve been told he does every show. The other song I immediately recognized was “Mamas, Don’t Let Your Babies Grow Up to Be Cowboys.” He only played for about an hour, understandable given his age. He sure didn’t look or act 85 though.

This morning I’m wishing my mom was still alive so I could call her and tell her about the show. She would have been so thrilled to hear that I got to see Willie live.

On to the news… I am again hearing stories of two women targeting men at bars in the Downtown core (neighborhood bars, not Beale Street, although they may go there too). Both women are African-American, and the one who does the approaching is about 5’8″, lighter skinned, straight long blond hair, very nicely dressed. The other one is 5’3″ to 5’4″, dark hair, darker skinned, a bit heavyset. Their male accomplice wears a shirt that is about two sizes too large and untucked, perfect for hiding a gun. He generally remains outside, but will come in the bar for a minute to give the women more money to buy drinks or when they want to point out a target to him.

I’ve been told they were seen Friday night at a bar in the Downtown core, trying to get a neighborhood resident to go somewhere with them to “go have some fun,” but he was onto their game and had the kitchen staff escort him out and watch him walk home safely. There may have been an additional male and female accomplice. A bartender at another bar told me the women got a man to come outside with them, where their male accomplice forced him to the ATM on the corner to withdraw money. Fortunately that effort was thwarted by another bartender who ran after them.

Everyone BE CAREFUL. I absolutely hate posting information that casts a negative light on the neighborhood I love and in which I have walked freely for almost 17 years, but these people need to be identified and either locked up or run out of Downtown.

In celebration of the national championship football game, Texas de Brazil is offering 20% off both dine-in and take-out tomorrow, Monday, January 7. It sounds like you have to mention the offer to get the discount, and it would probably be a good idea to bookmark this link which has promo codes.

Anasa Troutman, Clayborn Temple Executive Director, will be the featured speaker at the January South Main Association meeting at the temple Tuesday, January 8.

Your Inner Yogi, the yoga studio at 10 N. Second, is having a special through January 31 where you can get unlimited yoga classes all year long for $75 a month. That’s about 40% off the normal price. YOGA!

Things you didn’t know existed part 1: Voice-activated Jim Beam decanters that will pour you a shot on demand