No, this is not an early April Fool’s Day joke.

Big sports news broke yesterday, and oddly for this time of year, it wasn’t basketball-related. Johnny Manziel was declared clear to sign with the Alliance of American Football, and following being waived by the San Antonio Commanders, he was assigned to Memphis. Manziel tends to bring drama with him everywhere he goes, but really, that will spice things up in a league that has been boring AF since its inception.

Over at the Daily Memphian, Geoff Calkins ponders, what could possibly go wrong?

I started to type, “Hey Johnny, want to be on a Memphis in May BBQ team?”, but I better run that one by my teammates first…

I watched the Beale Street St. Patrick’s parade yesterday from the King’s Palace Tap Room. I have to give them compliments on realizing that one bartender working the day of a parade is not enough! They had two bartenders on duty and at times the manager acting as a third. 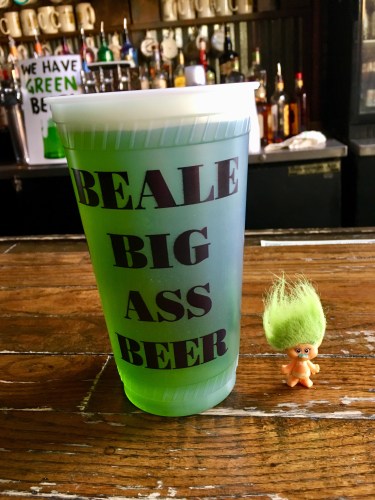 Perjorie T. Roll was very excited that the beer was the same color as her hair, but I wasn’t too excited about paying for it. 32 ounces of green PBR was $8.75. That’s pretty damn steep. Let’s calculate the Value Drinking Index on this beer: 32 ounces X 5% ABV / 8.75 = about 18.3. For your average beer at the Flying Saucer that would not be bad, but for a PBR such a low score is terrible.

With the AAC tournament here in town, the school bands were invited to participate in the parade. When the Cincinnati band passed by, people booed. NOT CLASSY, Memphis. That was a dick move. If you want to boo something, boo those Sprock n’ Roll and River City Pedalers party bikes that appeared later in the parade. Those things turn any hour into Amateur Hour On Demand.

Toward the end of the parade I snuck out and went to the Blind Bear to get a good seat for the Tigers vs. Houston game. There I got $2 PBR cans as well as this: 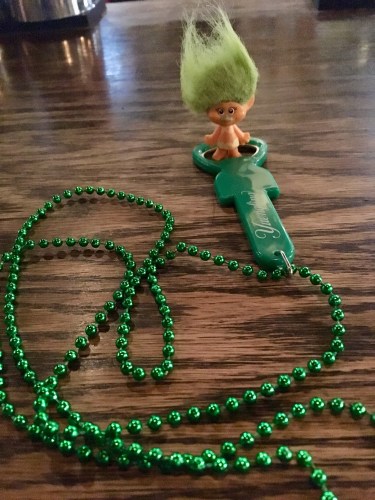 Let’s again compute the Value Drinking Index, this time on the PBR I had at Blind Bear. 16 ounce can X 5% ABV / St. Pat’s discount price of $2 = 40. Much much better. The Bear’s St. Patrick’s celebration, with discount PBR and $5 and $6 specials on whiskey, continues today.

Congratulations to Memphis 901 FC, who got their first goal ever in a draw against Loudoun last night.

John Mellencamp plays the Orpheum tonight at 8. Tickets start at $39.50.

Bardog has green pancakes and green beer today, along with Guinness and Jameson specials.

Tin Roof will have country singer/songwriter Jerry Patton from noon to 4 today.

It’s Selection Sunday. Tune into CBS from 5 to 6 PM tonight to find out which teams made the NCAA tournament and what their seeds are.

The Memphis Tigers played a fine game but ended up losing to Houston yesterday. Damn, Houston is a great team. They are worthy of a 2 seed in the NCAA tournament. Probably won’t get it because non-Power 5 schools don’t get respect. As for the Tigers, I would not be surprised for the NIT to come calling. That’s better than was projected for the team at the beginning of the season.

This is what I’ll be having for brunch: 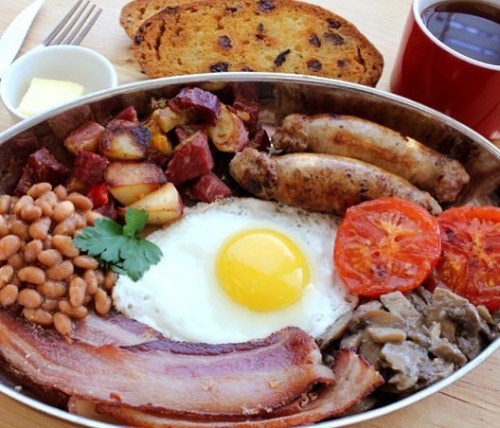 Pontotoc Lounge is having an Irish breakfast special. I will be there at 11 today. Join me, will you?