There’s been some confusion about the date of Beale Street Wine Race, with a couple of different dates having been mentioned. The organizers of the race cleared it up yesterday on Facebook. The Sunday festival schedule in April goes like this:

For those new to Memphis, Wine Race is a competition among Memphis-area restaurants and bars. There are four events:

Although some restaurant teams take the competition very seriously, in general this is considered the most debaucherous day on the spring calendar outside of BBQ Fest. It’s an event where servers can have fun one last time before the ultra-busy month of May begins. Normally Wine Race is the last Sunday in April, but the late occurrence of Easter this year messed up the festival calendar.

Cordelia’s Market on Mud Island posted a very valid reason to do your grocery shopping there: You can walk around with a beer in hand as you shop. Just stop by their taps and grab one.

Rizzo’s by Michael Patrick is celebrating the opening of the Power House movie theater this Friday, March 8, inviting patrons to stop in before or after the movie for 10% off appetizers and specialty cocktails. From 5-7 PM, show your ticket stub dated March 8, 2019, and they’ll bump the discount to 25%.

Tin Roof is having an all-day patio party the day of the Beale Street St. Patrick’s Day parade, March 16. Full band lineup inside, and four house DJs out on the patio. Tin Roof is a great place to watch a parade, as a group of people I know discovered back in December.

Max’s Sports Bar has announced they will have $5 Mardi Gras (half orange dreamsicle/half purple drank) slushies all day today.

Legendary restaurant Fino’s (the Midtown location) has been purchased by Chef Kelly English and will re-open next month. Other than adding some breakfast sandwiches, he does not plan on messing with an already successful and beloved concept. He is currently searching for former employees in hope that he can bring them back.

The Daily Memphian has a look at the agricultural startups making a splash at the Mid-South Farm & Gin Show this weekend.

Eight.0 plays the Center for Southern Folklore tonight at 7.

It’s not quite popsicle weather yet, but it soon will be. Here’s a recipe for Jack & Coke popsicles.

The House Ways & Means Committee is preparing a request for Donald Trump’s tax returns, and they are willing to go to litigation if necessary. They say they need the returns to investigate possible influence peddling, conflicts of interest, and Constitutional violations. 2019 is shaping up to be a bad year for Trump.

That’s the news for now. Back tomorrow with more.

Come on down to the Orpheum tonight and you could be the next contestant on The Price Is Right. The Price Is Right Live brings audience members up on stage to play the classic games seen on TV, where they can win appliances, vacations, or even a new car. There will be a chance to spin The Big Wheel to win thousands of dollars, and two lucky contestants advance to the Showcase.

Exciting news: Memphis’ soccer team Memphis 901 FC is going to have one of their home games broadcast on national TV. The Thursday, April 10 match vs. ATL UTD FC will be broadcast on ESPNews as part of that channel’s USL Championship Game of the Week. In addition, a road game at Lousiville on April 30 will be carried on ESPN3.

More exciting AutoZone Park news: With a sponsorship from Budweiser, the park has upgraded its Redbirds Club – now known as Budweiser Club – for 2019. Members enjoy a private air-conditioned area, with TVs, pool tables, and couches and high-top seating. Members also get free Anheuser-Busch beer, house wines, Coca-Cola products, tea, and water, and there is an all-you-can-eat buffet for every game.

Memphis 901 FC fans will especially be in for a treat in the Budweiser Club. For one thing, the club is located exactly at midfield. There will be a full bar for Memphis 901 FC matches. Prior to the matches, head coach Tim Mulqueen will come to the club and deliver a 15-minute “chalk talk.”

Memphis Black Restaurant Week begins Sunday, with black-owned restaurants across the city offering two-course lunches for $15 and three-course dinners for $25. Participating Downtown restaurants include Sage, The Office at Uptown, Robusto by Havana Mix, and Downtown Nutrition.

Quench, the liquor store on Second across from the Peabody, will host a tasting of locally made liquors tonight from 5 to 7. Blue Note Bourbon and Riverset Rye will be sampled.

Half Pints for Half Pints, the annual fundraiser held at Memphis Made Brewing Co. in support of its neighbor Peabody Elementary’s PTA, is tomorrow evening. Your ticket ($30-85) gets you Memphis Made beers and food from Central BBQ, Sweetgrass Next Door, Aldo’s Pizza Pies, Mulan Bistro (including a vegetarian option), and Celtic Crossing. For those who are not beer drinkers, Joe’s Wines and Liquors has donated several magnums of wine. DJ Zac Ives of Goner Records will provide the music, and there will be a silent auction where you can bid on items donated by neighborhood businesses.

In other brewery news, Meddlesome Brewing Co. out in Cordova is toying with the idea of opening their tap room 7 days a week. They are going to test being open Mondays and Tuesdays the next few weeks and see how it goes. On Mondays they will tap a cask of one of their offerings (if you’ve never had cask beer, you must try it – totally different mouthfeel than draft beer). On Tuesdays all the beers on their tap wall will be $3. For this coming week they’ve got some special events lined up: an Aldo’s pizza party on Monday the 4th, and a Mardi Gras party on Tuesday the 5th. They appreciate any feedback and if it works out, the 7 day schedule will become permanent.

The landlord of Raymond James Tower on North Front says a plan is in place to modernize the building’s elevators, and the landlord hopes the tower’s namesake tenant will reconsider a decision to move. Last week several Raymond James employees leaked an internal memo to The Daily Memphian informing them of a possible move to East Memphis.

Yesterday I skipped the Thursday food truck rodeo in Court Square in favor of a different Thursday lunch tradition. 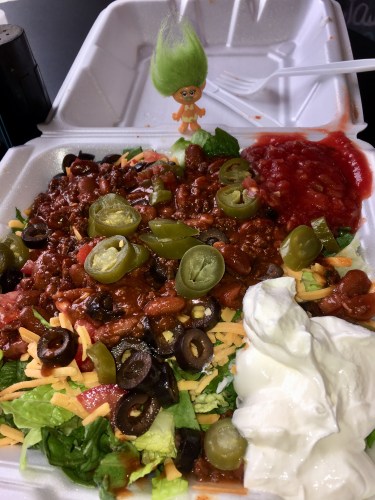 Every Thursday, all five Lisa’s Lunchbox locations have taco salad as their lunch special. I went over there late in the day (1:25; they close at 2) and they were out of tortilla chips, but had everything else. I assured the man at the counter that I was fine with no chips. As you can see, lettuce is topped with cheese, black olives, onions, jalapenos (upon request only) and generous portions of salsa and sour cream. You can get it with traditional chili, which is what I did, or beef chorizo. I got a can of Coke and sat in the window and watched traffic on Front Street as I ate. A very hearty and satisfying lunch!

Later in the day, I was telling people about my lunch, and it amazed me how many people live or work Downtown yet have never heard of Lisa’s Lunchbox. There are two locations down here and three more out east. The one I went to was at 116 S. Front, cat-a-corner from AutoZone’s headquarters store support center. The other location is in the Raymond James building, 50 N. Front St. Suite 200. I recommend you take the stairs to get to the second floor. Lisa’s serves breakfast, lunch, and smoothies, and they can cater office breakfasts and lunches.

Primas Bakery and Boutique at 523 S. Main will host a mixer for International Women’s Day next Friday, March 8, from 5 to 7 PM. Wanderlvst901 will be on site selling merchandise.

Former ESPN anchor Jemele Hill will come to the University of Memphis to give a lecture on the First Amendment on Tuesday, March 12. Hill was criticized (criticism I don’t agree with) for supporting Colin Kaepernick on Twitter and also for tweeting negatively about Donald Trump.

The New York Times has an opinion piece about the Eagles of Reelfoot Lake, located in West Tennessee about an hour and a half north of Memphis. My grandparents lived not far away, in Trimble, and took me there when I was a teenager. For those of you who have never been to the lake, it’s worth a trip. It’s peaceful place to get away from the hustle and bustle for a little while.

Today in 1987, your school served you this for lunch and you were excited about it… pic.twitter.com/KYWqvJJrlR

If you’re feeling nostalgic, you can get school lunch pizza at Max’s Sports Bar on G.E. Patterson.

If you’ve ever thought about driving for MIFA’s Meals on Wheels, the program that delivers nutritious meals to home-bound seniors, but you’re not quite convinced it’s something you want to do, there’s a new option. The ride-along program will pair you with one of the organization’s top volunteer drivers for a morning of deliveries. It’ll give you a first-hand look at how much the seniors appreciate the food and also the conversation.

Memphis in May and Memphis River Parks Partnership officials met on Tuesday to try to come to an accord on how the redesigned Tom Lee Park will accommodate Music Fest and BBQ Fest. Few details were released, but those from Memphis in May called the meeting “productive,” indicating that the two sides might be getting closer to that win-win we all want.

Scheduled Music Fest performer BlocBoy JB has turned himself in on charges of possession of drugs and drug paraphernalia and being a felon in possession of a handgun. A Memphis in May performer who will be out on bail when he gives his performance… it doesn’t get much more Memphis than that.

Oh hell yeah… Donald Trump’s business associate Felix Sater will be PUBLICLY questioned by the House Intelligence Committee on March 14. Trump is believed to have participated in shady deals with Sater, including involvement in the Trump Moscow project that never happened. Committee chair Adam Schiff announced the plan to question Sater after a day of private testimony by Trump’s former lawyer Michael Cohen to the committee yesterday. I better pop some popcorn that morning and make sure the TV is in good working condition. Sater will likely be faced with the choice of committing perjury before Congress (and getting hit with a criminal charge by Special Counsel Mueller) or telling the truth and implicating Don Jr. and Ivanka in crimes. Donald Trump will lose it if his precious princess faces prison time.

A source I follow on Twitter, John Schindler (@20committee) tweeted that the March 14 date was “such interesting timing… #HINT.” Hmmmm…..

All right, that’s all the news I can find for today. Back tomorrow with more.