Bardog Tavern has a hilarious sign on one of their chalkboards. It reads “NO HOOKERS” and has a cartoon drawing of a woman in a dress throwing bills in the air. I rarely go there at night, but I wouldn’t be surprised if hookers go in there. Come to think of it, I’ve seen hookers in every one of my favorite watering holes except Max’s Sports Bar. Really, that’s no surprise, either, given the number of hotels in the area. This is the part of town where the high-dollar hookers are most likely to make their money. Plenty of men here on business trips looking to get a little action, action their friends and family and possibly spouse will never know about.

Ladies: If your man goes on a lot of corporate business trips and you wonder what he’s doing after-hours, open up the web browser he uses on his computer. Type in the name of a city he has traveled to recently, a space, and the letters “es” and see what happens. For example, if he’d been to Nashville recently, type in “nashville es”. It will probably autocomplete to something like “nashville escape rooms” or “nashville estate sales”, which are the most popular searches that start with those characters. However, if it autocompletes to “nashville escorts”, hubby has some explaining to do.

I mentioned that I had never seen a hooker at Max’s Sports Bar. With the opening of two hotels in the area, Central Station Hotel and the one at 477 South Main, I bet that changes soon. In fact, the hotels are going to change the whole vibe of South Main. For the past 25 years it’s been the neighborhood that was “Downtown, but away from all the hustle and bustle.” Now that’s not going to be the case anymore. Will it be for the better, in the opinion of the longtime locals down there? Not sure, but change is coming so you might as well embrace it. Rizzo’s and South Main Sushi should see an uptick in business, and the new Little Italy location will do well. Stores like Walking Pants Curiosities and the Harley-Davidson shop will get more people in there browsing around.

Memphis 901 FC is having its first-ever Ladies Night on Saturday, September 28. This specialty ticket gets you access to the Party Deck, beer, wine, a BBQ buffet, and a gift bag. One lucky lady will win a Signature Jewelry set from Kendra Scott. Match time is 7 PM and the opponent is Bethlehem Steel FC.

Democrat Kamala Harris will make an appearance in Memphis on Saturday. The senator from California will have a town hall at East High School at 6:30 PM to discuss her “3 AM Agenda,” issues that should be keeping Americans up at night.

The Memphis holiday parade on Beale Street has been set for Saturday, December 14 at 3 PM. This is excellent… they moved it off of the first Saturday of December, when way too many events go on Downtown the same day. I will be there, watching the parade outside the King’s Palace Tap Room. Come join me! Or don’t, if one member of your group pitches a hissy fit about me being there.

Sunrise Memphis will hold a Make-a-Wish fundraiser on Saturday, September 28. A girl named Vega will be there making three specialty biscuits, and if you buy one, $2 of the price will go to the charity. Also, Across the Board Hospitality will donate $1 every time any other biscuit or biscuit sandwich besides Vega’s is sold.

Pabst tweeted that its PBR hard coffee, currently in test markets in five states, will be available nationwide in early 2020.

I tried a sample of Skrewball whiskey yesterday. That is a new whiskey which tastes like peanut butter. Really good!

Action News 5 has the story of how Memphis became the backdrop for new TV series Bluff City Law.

The Peabody is hosting a Dinner & Bubbles champagne dinner October 1 at 6 PM. It will feature Moet & Chandon champagne. Here’s the menu. Registration is $150 and includes valet parking. Register

I went back to River Time Market & Deli on the south side of Court Square for lunch yesterday. This time I got the Court Avenue Cajun. Normally that comes with Cajun turkey, oven roasted chicken, pit ham, and American cheese, placed on a sub roll and heated, then topped with jalapenos and Creole mustard. Based on recommendations I had received from people who had tried that sandwich, I subbed out two of the ingredients. I asked for pepper jack cheese instead of American, and to give it less of a bite I asked for pepperoncini peppers rather than jalapenos. 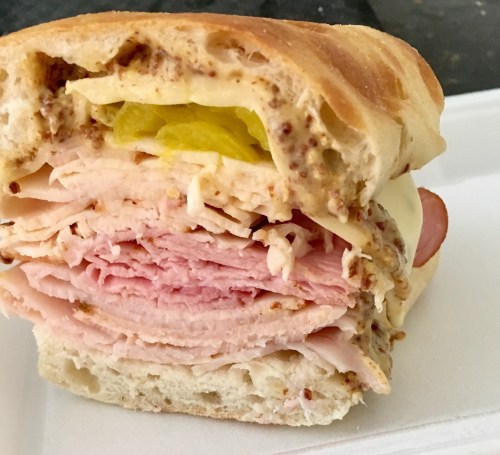 It was piled so high with meat, it barely fit in my mouth! Yummy combination of flavors. Once again, this is only half the sandwich. I have learned that I get better photos when I photograph half the sandwich instead of the whole thing.

To thank me for being a good customer and for writing about River Time in my blog, Miss Pam put a sample of her blackberry cobbler in my bag. It was very good too. Gotta get to work, so apologies if there are typos in this. I didn’t have time to proofread as well as I usually do. Back soon with more news.