This coming weekend will be a memorable weekend for me: My final weekend in my 40s. I’ve been thinking about that for a while. What do I want to do?, I asked myself. Anything special? I’ve come to the conclusion that I don’t need to do anything special. I just want to hang out in my favorite places with my favorite people.

And then a sentence popped into my head: “When you live in Downtown Memphis, every day is a staycation.” It’s really true. So much to do down here, so many places to go eat (especially this week for Downtown Dining Week), and most importantly, it’s so easy to make many good friends here.

Tool will bring their North American Tour to FedExForum on January 31. Tickets go on sale this Friday at 10 AM.

Penny Hardaway and the Memphis Tigers are on national TV tonight. The #13 Tigers play #14 Oregon in Portland with tip-off on ESPN a few minutes after 8 Central Time. This is one of those “Classic” games and technically a neutral-court game with Memphis as the home team, although Eugene where the University of Oregon is located is driving distance away. ESPN has lower-ranked Oregon as an 83.8% favorite. Just one more reason for the Tigers to play with a chip on their shoulder.

The injunction James Wiseman got is good until a hearing on the 18th, so he almost certainly will play tonight. Cheers to Wiseman, Penny, the U of M AD, and President M. David Rudd for having the balls to take on the NCAA. Someone needed to. Their arbitrary rulings are just ridiculous.

You know, I was thinking about it… the NCAA told Penny that Wiseman was eligible back in May, then reversed themselves in the October 31-November 5 range. I definitely think that gives Wiseman a claim for monetary damages. If he had known back in May he’d be ineligible, he could have signed with an overseas professional team and made bank for his services. Or, he could have signed one of those $125,000 1-year top-prospect contracts the NBA G-League offers, to get nightly feedback on his performance from people associated with the league in which he aspires to play. Can you imagine James Wiseman on the Memphis Hustle? The Landers Center would have been packed every night, and NBA scouts from all over the country would have attended every game.

Yesterday was a soggy day, and as I walked home about 9 PM I got hit in the face with a light wintry mix. Yuck! The low tonight is predicted to be 19 and temperatures won’t get to normal for this time of year anytime in the next week, although MemphisWeather.net forecasts above-average temperatures for the extended period of November 19-25.

Hira Qureshi of The Daily Memphian has a list of places to get Thanksgiving dinner, whether you want to take it to go or dine in. For Downtown:

It wasn’t in the DM’s list but I’m pretty sure LUNCHBOXeats cooks to-go family dinners as well, or at least they have in years past.

If you don’t mind driving to another part of town, my recommendation would be the Holiday Inn at the University of Memphis. Those folks are studying to be in the hospitality industry and they put on a sumptuous spread for holiday buffets. Cost is less than most hotel restaurants, and since it’s buffet style you can go back for seconds.

The Green Beetle is looking to rent commercial kitchen space to expand catering and other parts of their business. They’re especially interested in using a church or other space that has a rarely-used kitchen, and in addition to paying rent, they’d be willing to feed the homeless and do congregation dinners. They’d also be happy to assist in any kind of community engagement the church or organization is involved in. This sounds like a real win-win for someone out there. If you are interested or have a lead for them to explore, you can get in touch with the Beetle on Facebook.

St. Jude has issued its annual neighborhood guide for its upcoming marathon on Saturday, December 7. If you plan to drive through Downtown or Midtown that morning or early afternoon, or if you plan to be a spectator to cheer on the runners, this is a must-read.

Students in Pratt, Kansas recently visited 40 businesses in the town, shadowing people who worked at those businesses to get an up-close look at what they do as part of a mentoring day. The story made the local newspaper, The Pratt Tribune, with the headline Students get first hand job experience. Hyphens matter!

I went back to Longshot Sunday afternoon to try one of their house-made sausage sandwiches on bread from Hustle & Dough upstairs. 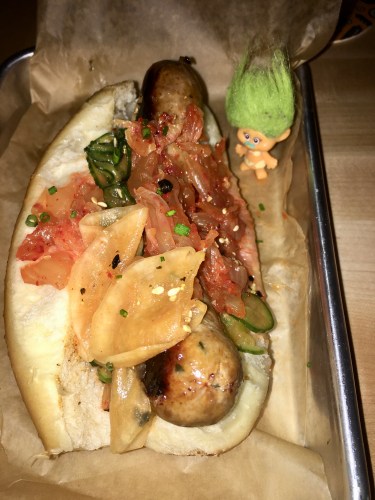 This is the Korean BBQ sausage, hand-made with ginger, garlic, soy, gochujang, and sesame. Toppings include kimchi, daikon cucumber salad, toasted sesame seed, nori, and scallion. It was good, not too spicy even though the kimchi was on there. A delicious Asian take on the bar’s signature item. Longshot is at Main and Butler (side entrance on Butler) in the Arrive Hotel.

The Union Mission will feed those in need the day before Thanksgiving. Did you know that $1.67 provides a complete meal for one person? Donate here

Well, today after work I get to deal with the not-so-fun side of coming up on a birthday that’s a multiple of 5: a trip to the DMV to renew my driver’s license. I’m hoping that most people will decide it’s too cold to get out today and the line will be short. Wish me luck. Back tomorrow with more news.