There were reports of traffic violations Downtown on Nextdoor Saturday. These included

The frustrating thing is, MPD is often so slow to respond that the racers leave the area. Also frustrating is that police are not required to do anything if there is not a victim on the scene who wants to file a report.

FreeWorld has announced there will be a drive-by party to celebrate the 90th birthday of saxophonist Dr. Herman Green Wednesday, May 27 from 5:30 to 7:30 PM. It’s a shame it can’t be at the Blues City Band Box as usual, but it’s a way to let Dr. Green that he’s loved and appreciated on his special day.

Taking it to the Streets: Edible Memphis has a look at the effect of “off-premise” beer, wine and liquor sales by restaurants, allowed by an executive order that expires May 29. In the article, managers discuss how alcohol sales have propped up restaurants and allowed them to retain more staff on payroll.

Another prominent Memphis attraction is set to re-open:

So excited to announce that The Gates of Graceland are re-opening to visitors this Thu. May 21! We’re committed to TCBing to ensure the safety of our guests & staff, and we’ve adjusted operations to meet or exceed the recommended guidelines. More info: https://t.co/2VE6YGncZt pic.twitter.com/DyDAZN9zVc

Rachel’s Salon and Day Spa re-opens today. They have implemented distancing measures including styling stations that are spaced 8 to 10 feet apart. For customers who are at high risk of COVID-19, they have converted one of their massage rooms into a private styling room.

I’ll probably wait a week or two before trying to make an appointment… let all the ladies who get haven’t had their hair done in two months or longer get in there first.

It looks like two proposed ordinances to require the use of face masks in public, one in the City Council and the other in the County Commission, maybe be dead in the water. Shelby County Attorney Marlinee C. Iverson (hey, I went to college with her!) said that according to the governor’s Executive Order 30, local governments can’t require use of masks – only the health department can.

So, will the health department do so? In Friday’s press conference, there was a question about this. Dr. Haushalter said that while she strongly recommends the wearing of masks, requiring them is perhaps inviting unwanted conflict. Other cities have experienced protests and even threats of violence over mask requirements.

Last week I decided to venture out and pick up some cuisine from one of my favorite chefs… and since PBR has returned as a factor in my daily spending, I decided Boy-ar-dee would be the chef so I could conserve funds. I made the short walk down the street to Family Dollar.

Blast it all, they were out of spaghetti & meatballs and beef ravioli, my two favorites from that brand. I looked around to see what my other options were. Near the end of the canned food aisle I saw something I had never seen before in my life: Canned boiled peanuts. 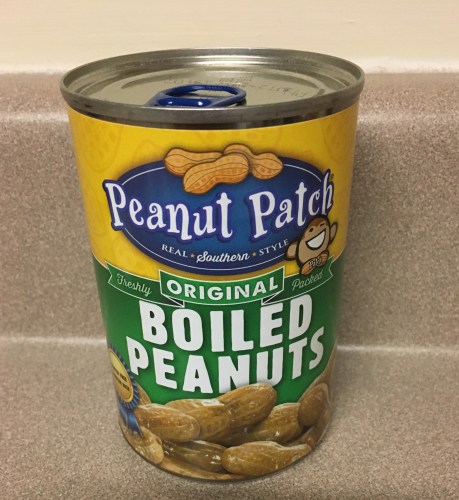 Color me intrigued… when I worked in Horn Lake, I’d bought hot boiled peanuts at the gas station, but I didn’t know you could buy peanuts in a can and heat them up at home.

A look at the back of the can confirmed that these peanuts could be heated up in the microwave. 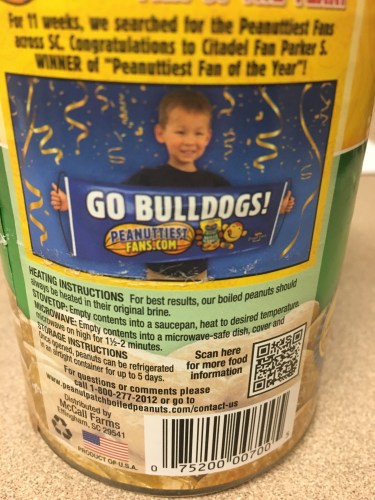 I figured, these would probably not be any good, and I felt guilty for cheating on my friends at The Peanut Shoppe up the street, but curiosity got the best of me and I walked a can up to the register. I figured, for the price of a dollar I wouldn’t mind too much if this turned out to be a failed experiment.

Yesterday I opened the can and dumped the peanuts, in their brine, into a microwave bowl, covered it, and heated it for 1:45. This is what came out: 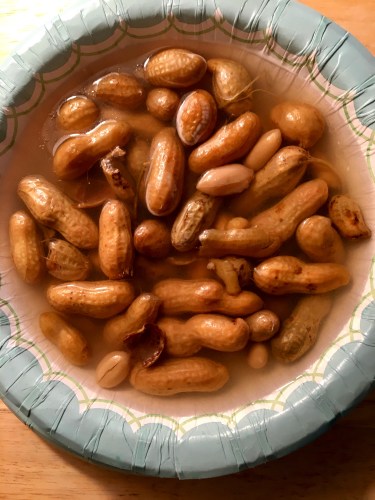 They were messy to eat, but I have to admit they were tastier than I expected for the price. I can’t believe I’ve never seen brined peanuts in a can before at a grocery store – even in Earle, Arkansas where I worked for two and a half years. Am I the only one who’s missed out on this experience?

I’m fairly sure there will be a second post between 12:30 and 1 today. I will be back tomorrow if not then.