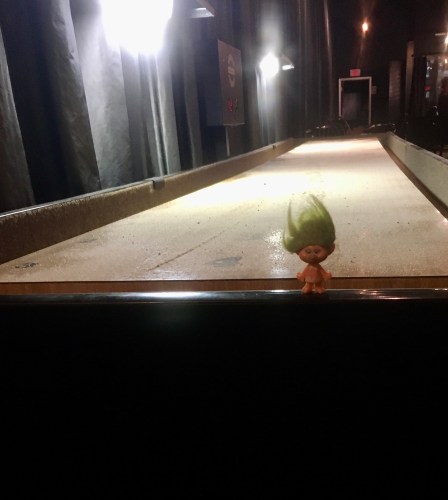 The new shuffleboard table arrived at the Blind Bear yesterday. It occupies the space where bands previously played. It appears to be coin-operated but they had the pucks behind the bar, most likely so they can sanitize them between games. The table will be a fun addition and it’s good to have the game in the Downtown core.

By the way, I want to extend a “cheers” to the Bear for enforcing their rules. I had been putting on my mask for trips to the restroom, but when we made a trip to the back room to see Princess Mustard (long story) I forgot to put it on and the bartender reminded me. I appreciate that! I’m not going to stay home from bars but I’m willing to do what I can to protect the other people there. I see the mask as a sign of consideration for others, not a sign that I’m subservient to Nancy Pelosi or whoever Trump supporters hate today.

I visited the Silly Goose earlier in the day, where Jessica said, “If we go back to Phase 1 I’m gonna have to get nekkid for tips.” Hey Mayor Strickland, I changed my mind! We entered Phase 2 too soon! Let’s roll it back!

The Grizzlies’ schedule for the remainder of the season has been released. It is (all games in Orlando)

That’s a pretty brutal schedule but not different from what every other team faces: The bad teams out of contention for the playoffs didn’t come to Orlando.

Sucks that so many of the games happen when people are at work, but that’s what the Grizzlies get for being a small- market team.

Set your DVRs – the movie that was made about The Little Tea Shop will premiere Friday, July 10 at 7:30 PM on WKNO.

The county clerk’s office and its satellites, which closed three weeks ago due to a case of COVID-19, will reopen next week, but expect much longer wait times as the number of staff in the offices will be reduced. Appointments will be able to be made.

The National Ornamental Metal Museum will host its first-ever community curated exhibition. Each day from July 13 to 17, the public will vote on pieces in five different categories. The top 30 vote-getters will be on display in an exhibition titled It Takes a Village from September 28, 2020 to March 14, 2021. Voting will take place on the Metal Museum website. The categories are

Memphis 901 FC has drawn into Group G in the restart of the USL. Memphis will play the three other teams in its group, Birmingham Legion, Charlotte Independence, and North Carolina FC four times for a total of 12 matches. Memphis will play three matches against teams outside Group G, and its March 7 loss to Indy will count as the remaining match of the 16-game regular season. The schedule is set to be released soon, with play set to resume July 11.

Chris Hill and Friends play The Vault tonight 8 to 11.

Local clergy say they are disappointed in the police reforms that came out of the city’s meetings with activists, calling the adopted measures “low-hanging fruit.”

I’m the proud owner of a new iPhone 11 this morning! For the first time in 11 years, I ordered the phone online rather than go to an AT&T Store. That meant I had to set up the phone myself, but it couldn’t have been easier. I unpaired my Apple Watch from my iPhone 6s, then held the 6s near the new 11. The phones detected each other and walked me through the Quick Start. I restored last night’s backup of the 6s, and boom – the new 11 had all my contacts, apps, and even the photo of Perjorie T. Roll on the lock screen. Then I activated my phone on AT&T’s website and paired my watch to the new phone.

One piece of advice I will pass on, though – don’t throw away the box in which your iPhone ships. It contains two numbers you need during activation. I managed to find these numbers in the new phone’s settings, but for a minute there I had a scare.

The Ticket recently interviewed Carly Fiorina. She was the head of HP for years and she would have been the Republican vice-presidential candidate in 2016 had Ted Cruz won the nomination. Whether you’re a Democrat or a Republican, this interview is worth a read. She has some ideas that make sense.

Bardog is first on the agenda today. Back tomorrow with more news.