I want to start off this post by alerting everyone to a delicious brunch special going on today at The Vault at 124 G.E. Patterson. Chef Steph Cook of RAWK’n Grub is spending some time in the kitchen at The Vault as he waits for his next plan to come together. This is what he has in store for diners today:

Doing a lil special for Brunch at the @vaultmemphis for this amazing RAWK Lobster Mane Lobster Roll! Sous vide lobster poached in @bealestbrewingco Love & Hoppiness with citrus and butter and tossed in a dry BBQ rub from @rendezvousmemphis for a BBQ aioli and Payne’s BBQ mustard slaw! If Mempho had a Lobstah Roll this would be IT!!! #supportlocal #cheflife🔪 #collab #ediblememphis #fooddrankculture #901eats 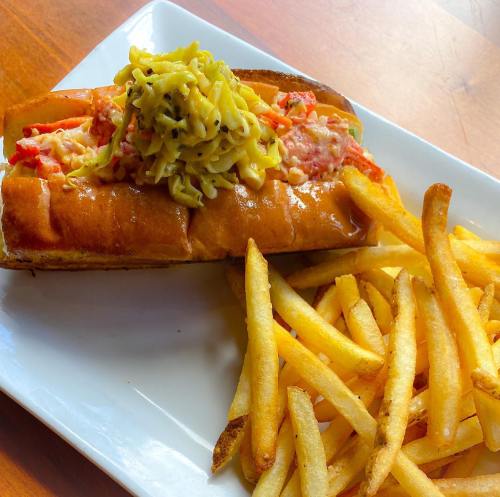 Sounds like the place to be today… just don’t take over two hours to eat your Lobstah Mane roll or you will be an OUTLAW!!!

I mean, really, how are they going to enforce that part of the health directive, put a stopwatch on every table? This in addition to collecting contact tracing information, not being able to serve alcohol until a food order is in, having to use single-serve condiments, and all the other hoops full-service restaurants are now required to jump through, just to be able to operate at 50% capacity. Is anyone actually making any money doing this?

In other restaurant news, a sponsored post appeared on my Facebook news feed yesterday, for a new restaurant called Curfew Memphis that is supposed to open soon in Downtown Memphis. The restaurant will be a new concept by celebrity chef Fabio Viviani. Vivani, a native of Florence, Italy, moved to Ventura County, California in 2005. He competed on the Top Chef reality series in 2008 and was voted fan favorite. Since then he has been a television guest and cookbook and e-book author, and he operates restaurants across the country. The address is 164 Union, which means it will be in the hotel being constructed across B.B. King from AutoZone Park. Well, that certainly will be an improvement over the Denny’s that was in the old hotel!

So anyway, if you’re looking for a job, they posted the following:

CURFEW is a new restaurant concept from Celebrity Chef

that is coming to Downtown Memphis soon, and WE ARE HIRING for the following positions:

I found this on the Public Domain Review site yesterday and it may be of interest to Memphians who love the river: Ancient Courses: Harold Fisk’s Meander Maps of the Mississippi River (1944). To use a quote from PD Review: “Fisk dreamed up a captivating, colorful, visually succinct way of representing the Mississippi’s fluctuations through both space and time.”

Memphis 901 FC led for most of last night’s match, but Charlotte scored a goal in the 83rd minute to make it a draw, giving Memphis 1 point in the standings rather than the 3 it hoped for. Action News 5 has video as fans returned to AutoZone Park.  Local infectious disease expert Dr. Jon McCullers performed the pre-match guitar smash. Calkins: 901 FC proves that fans in the stands can be done

The Shelby County Health Department issued guidance about a certain type of masks:

Check your mask. If it has a vent or valve, it is not the kind of mask that prevents the spread of #COVID-19. Protect the people around you–do not wear masks with vents or valves. pic.twitter.com/9kcXp8BCCM

Exposure Memphis is an annual event held on 9/01 Day, September 1, and it’s an opportunity to expose Memphis to many of the ways to get involved in their city. Typically 150 or more organizations participate. This year, for the first time Exposure Memphis will go virtual. The event will be streamed through the Hopin platform 4 to 7 that afternoon. Register for the event and get access to a virtual swag bag full of discounts and freebies. They have a survey that can help make you aware of Memphis organizations they think you would like to connect with during the virtual event.

Health Department Director Dr. Haushalter’s push to re-establish a county Board of Health is meeting some criticism from suburban mayors in the county.

The Memphis Police have GOT to get this situation Downtown on the weekends under control. Last night I heard drag racing outside all night (and in fact I hear it now, 7:27 AM as I type this). At 3:15 AM I heard a series of gunshots near Second and Monroe. For the next hour and a half I heard more distant gunshots that sounded like they were coming from Riverside Drive multiple times. To put things into perspective, living Downtown prior to this year, I heard a gunshot on average once every five years.

I guess I should look at the bright side… all this crap will depress the market value of living space Downtown, keeping my rent down.

Yesterday would have been a very sad day for my mom, if she were still with us: Regis Philbin passed away.

I have food pics (and troll pics) but I am going to push those back to tomorrow’s post because I want Facebook to pick up the image of Steph’s lobster roll when I share today’s post. Everyone PLEASE WEAR YOUR MASK so Health Directive No. 10 will be less restrictive, not more than No. 9. Back tomorrow with more news, or later today if I get bored, which I probably will.