I made a first visit to Downtown Liquors and Wines on Madison near Main yesterday afternoon. The prices are very reasonable! They have a good selection and really took advantage of every inch of space in that little shop. If you live in the area and have not checked it out yet, please do! The shop is just to the east of Winfield’s clothing store, and Mr. Winfield is the new owner.

One tip: Not only do you step up to get into the shop, but there’s an additional step up once you get inside. That second step can be easy to miss when you have a face mask on, so be careful! 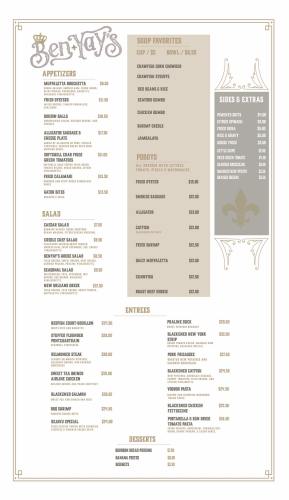 Ben-Yay’s is at 51 S. Main, next to Family Dollar, in the building that used to be DejaVu. I see they’ve retained one of the DejaVu dishes under the name DejaVu Special” – fried catfish topped with crawfish etouffee, the dish Chef Gary Williams called The Arkansas Outlaw when he owned the place. Nice to see gator on the menu in the form of bites, a po’boy, and gator sausage.

Those of you new to Memphis who want to jump into the food scene here should check out this A to Z list by the Daily Memphian’s Dan Conaway. I’d add a few more:

All right, people. We’ve got a situation tonight I want to warn you to expect in advance. The Memphis Tigers host the Arkansas State Red Wolves in a nationally televised game on ESPN tonight at 7. Many of you are going to want to watch the second half while dining at your favorite restaurants.

That’s where we have a problem.

You see, the current health directive says that restaurants must close to in-person dining at 10 PM. College football games don’t typically get over in three hours. There is no “but you can stay open until the end of the game” exception in the health directive. I have little doubt that Code Enforcement is fully aware of the game time and will be out for surprise inspections tonight, looking to cite restaurants that serve past 10.

So, if a restaurant kicks you out in the middle of the fourth quarter, please be understanding. They’re trying to keep their doors open in the middle of a pandemic. If you have the ESPN app on your phone, get logged on in advance so that you can watch the final minutes in your car in the parking lot, or on the walk home if you’re a Downtowner dining at a neighborhood restaurant.

Local Memphis reports that a defensive back for the Tigers was shot in the leg earlier this week on Spottswood near campus.

Chris Burns, a writer/vlogger for sneaker site ARCH, visited Downtown boutique Stock & Belle to look for clothing to pair up with his new kicks from Downtown L.A. sneaker manufacturer COMMUNITYmade.

I’m taking a break from Bardog brunch this morning. I’ve had inspiration for an article to write for Medium, this one about beliefs, for over a week now, but I didn’t really put the entire thing together until this morning as I lay in bed. So I plan to spend much of the day writing. I’ll be out at Blind Bear about 8 this evening to watch the Tigers. GTG and I’ll be back tomorrow with more news.