I saw photos of the beer dinner Bardog had this week and the food looked scrumptious. If you missed out, you’ll soon have another chance at one of their special dinners, although this one won’t feature beer. The chef said yesterday they’re looking at Halloween as the date for the next one. He’s thinking about a seafood theme and each course will be paired with mixed drinks.

Might as well walk over to the calendar right now and mark down SHITSHOW for October 31, because that’s what it is going to be.

… But wait, there’s more. Even if you’re smart enough to not go out on Halloween night this year, there’s still a high probability you will be around people who did… on ELECTION DAY, after the coronavirus has had three days to incubate.

If ever there were a year to vote early, this is it.

Well damn… it’s 1:28 AM as I type this and there are still a lot of people awake. 14 rooms have their lights on at the Holiday Inn, at least the side of it that faces me, at this hour. Honestly, I’m surprised 14 rooms are even occupied. I guess the pandemic hasn’t completely killed Memphis’ tourist business. Anybody having sex? (Gets out binoculars) Nope, doesn’t look like it.

The Silly Goose has their fall cocktail menu up. 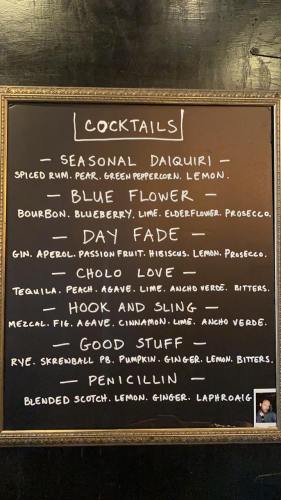 (Photo credit: Brittini who bartends there) You can’t hang out while you drink your cocktail – although hopefully that’ll change soon when Health Directive No. 12 comes out – but you can get it to go. Might as well get one of their wood-fired pizzas to-go too!

It is now mathematically impossible for Memphis 901 FC to make the playoffs this year. The squad lost 4-1 to Louisville City yesterday on the road. They return to AutoZone Park Wednesday night to host North Carolina FC. Playoff hopes or no, the matches are a lot of fun, so come out! Plus, it might be a bit easier to get one of the 1000 or so social distanced tickets now.

The Memphis Tigers football team has canceled Friday’s date with UTSA as the virus continues to rage. However, the Tigers have added a home game with Stephen F. Austin on November 21.

Only September 20 and we’re already on the Greek letters: Tropical Storm Beta is expected to hit the Texas coast Tuesday and could dump some rain on Memphis as a tropical depression Thursday night and Friday.

I wonder what will happen if they run out of Greek letters? There’s still two and a third months left in hurricane season.

Tin Roof has NFL Sunday Ticket to go along with its brunch.

Still trying to figure out writing on Medium.com. Thursday and Friday I published 3 new articles on the platform and busted my ass trying to cultivate relationships with other writers. Saturday I went to Bardog for PBR and shots (and calamari, because you have to order food). I made more money Saturday than I did Thursday and Friday combined. Long-term – like on a monthly basis – Medium is a good side hustle once you build up a writing portfolio, but day-to-day there’s more variance than there is at the dog track in West Memphis.

I am better learning how to target an audience, though, and I have an article on intuition I want to get posted, so I’m going to publish this blog post then head over to Medium. No Sunday brunch today although I might get out later if I completely exhaust my creative self. Back tomorrow with more news.