Yesterday we got a first-hand look at what can happen when you believe a narcissist and go along with what they want you to do because it’s expeditious to do so.

People stormed the building in which the business of our nation is conducted. A Confederate flag was flown inside the Capitol building. Not even during 1860-1865, when the Confederacy was actually a thing, did that happen. And it happened on a day when the first elected Black senator from the South was declared the victor in his race.

The United States looked like a banana republic, a third-world country, in the eyes of the world yesterday. Vladimir Putin’s sides must hurt this morning from laughing so hard.

And the leader of the free world could not even get on TV and command the chaos to stop without first calling the election stolen and fraudulent.

The Trump era is over. All but his base are abandoning him.

The 25th Amendment is being seriously discussed in the halls of the White House. If Mike Pence and a majority of the Cabinet agreed, Trump could be declared unfit for office and Pence would become acting president. This would strip Trump of his pardon power and the nuclear football for 13 remaining dangerous days.

There is also talk of impeaching Trump a second time. That wouldn’t happen quick enough to oust him from office in 2021, most likely. However, a conviction would preclude him from ever running for office again.

We are witnessing Trump’s narcissistic collapse. Narcissists who read my blog: Something like this will happen to you one day (although perhaps not on such a grand scale) if you don’t change your ways. Check yourself into therapy, and do it for yourself, not to show others “look, I’m in therapy.” Your entire life is a show you put on in exchange for validation from others. We see through you. Game over.

Today is I’m Not Going to Take It Anymore Day. What a timely holiday. Today is also National Pass Gas Day.

On to the news.

An extra $5000 grant is available for restaurants and groceries whose bottom line was impacted by COVID. $5000. That’s less than half of what popular Downtown Memphis nightspots would make in revenue in one night (New Year’s Eve). It’s better than no money at all, but in no way does it make up for the effect of cutting restaurants to 25% capacity and making them close up to 5 hours early.

The Ditty Crow Inn has posted the menu for this Sunday’s pop-up restaurant at the 40 et 8 on Legion Rd. in West Memphis: (Click image to enlarge) 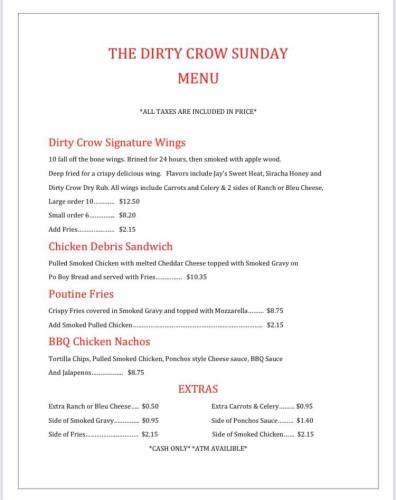 There will be a few additions to the menu: Chan’s Lemon Pepper wings, soy ginger wings, and Pancho’s cheese dip fries with crumbled bacon on top.

Downtown Huey’s is hiring a host/hostess. $11 an hour, plus the option to train to be a server after 3 to 6 months.

The Shelby County Health Department has closed down 8 restaurants in violation of Health Directive 16. None of the restaurants are Downtown. Several are hookah and cigar lounges.

Popular Midtown bar Printer’s Alley has been closed, but not for COVID violations. It was found in violation of a 2019 consent agreement. There had been a pattern of drug dealing and unlicensed liquor sales, and the owner had to submit a plan to curb that activity. Part of the plan was no more super-late-night hours, which police observed the bar violate on New Year’s Eve.

$50,000 of artifacts were stolen from the Memphis River Museum on Mud Island while it was closed during the pandemic.

Congratulations to Rev. Raphael Warnock and Jon Ossoff, new Senators-elect from the Peach State. This will give the Democrats a 50+VP to 50 majority in the Senate, giving them the presidency and both houses of Congress. I notice the 2016 “You lost. Get over it” people don’t have much to say right now.

Let’s all take a minute to thank Black women for the results of the 2020 election.

I’ll have my headphones in for the Shelby County COVID-19 task force press conference at noon, and will have highlights tomorrow morning. If anything really big gets announced (which I don’t think will happen) I’ll be back this afternoon.