Stix, the fast-casual Asian restaurant in the Terminix building, is hiring a sushi chef. “No advanced culinary experience needed,” the sign reads. “We will train you.” That sounds like a fantastic opportunity for someone. I would think a trained sushi chef would never have trouble finding work, plus they’d be in demand for parties.

I got the Shrimp Lo Mein when I went in there yesterday. 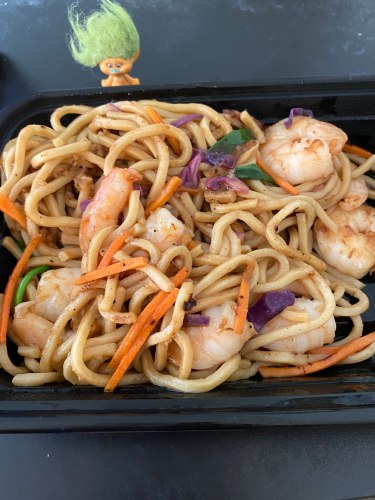 When I picked up my order, the cashier asked, “Do you want any sauce besides the usual soy sauce?”

“We have cups of this teriyaki-style sauce,” said the cashier. “It’s really good if you save part of your food to microwave later.”

I was so hungry that I doubted there would be leftovers, but I asked for the sauce anyway. When I got home, I dipped one of the shrimp in the sauce, and it was so good! I ended up dumping the entire cup of sauce on my lo mein. Don’t pass on that sauce the next time you get food from Stix.

Stix is hiring cashiers, too, by the way. It seems like the employees have a fun time at work there.

On my way down to get my food, I noticed that the Subway on Second Street, at Union in the One Commerce Square parking garage, has closed. I guess the competition from Jimmy John’s, combined with Downtown office workers working from home, killed their business. The Subway at N. Main and Jefferson remains open.

The Grizzlies have announced the entertainment for tonight’s regular-season home opener vs. Cleveland.

Remember, you must show proof of COVID vaccination or a negative COVID test result within the past 72 hours to be admitted to Grizzlies home games. The way to expedite this process is to use the CLEAR app, which you can arrange a download here.

The DM has a look at two additions to FedExForum this year: The WynnBET sports bar and Slim & Husky’s. The DM also has a fun interview with new Grizzlies center Steven Adams.

River City Records has a post on its Facebook page you can like and share for a chance to win two tickets to the Joe Bonamassa concert on Friday at the Cannon Center. The drawing will be held Friday morning and the tickets are for the center stage orchestra section, a $380 value.

New Memphis is hiring an Activation and Impact Manager. If you’re the social planner of your circle and you have a knack for connecting people, this may be the role for you.

The Mario Monterosso Quartet will be back at the Blind Bear Saturday night. Their speakeasy-style music is an absolutely perfect fit for the venue.

People’s on Beale and Longshot are featured in StyleBlueprint’s 5 Memphis bars with games.

The MOXY Hotel at 40 N. Front is hiring a front desk and bartender position. That’s one position, not two. People I’ve met who’ve stayed at the Moxy tell me they ask if you want a drink as soon as they get you checked in. That’s very Downtown Memphis.

The Crowne Plaza is hiring a Food and Beverage Manager.

Gambling.com is picking Memphis to win the NBA’s Southwest Division, calling their current odds of +350 a good bet. Currently, bookmakers have Dallas as the favorite to win the division, with odds of -230.

It’s a day for my friend Air Traffic Mike to celebrate – The International Day of the Air Traffic Controller. It’s also National Chicken and Waffles Day. That’s a dish I’ve never really understood, but people clearly like it – it comes flying out of the kitchen during Blind Bear’s weekend brunch.

Watch out for scam calls spoofing the Tennessee Bureau of Investigation’s phone number.

Rice and Donna perform on the deck at Rizzo’s tonight at 6.

The annual Indie Memphis Film Festival kicks off today and runs through Monday.

County Commissioner Tami Sawyer was arrested yesterday at the No More Excuses rally in front of the White House. The purpose of the rally was to encourage President Biden to rally through Congress the Freedom to Vote Act, the John Lewis Voting Rights Act, and statehood for Washington DC. The protesters believe (and I agree) that the Senate is being held hostage by Democrat-In-Name-Only Senator Joe Manchin, and Biden needs to stand up to the DINO.

I went ahead and downloaded the CLEAR app to my phone and got it set up with my ID, face recognition, and vaccine card. I have no plans to go to tonight’s Grizzlies game, but “I have an extra ticket, want to go?” situations come up now and then and I want to be able to avail myself of them. It takes about 10 minutes to set up your health pass, which is a QR code with a photo of your face. If you have any interest in attending Grizzlies games this season, I’d advise you to go ahead and get that done.