Well. That was not a good day for Memphis basketball.

The Tigers played some extremely sloppy basketball in Brooklyn, turning it over way too much and not carefully executing plans. They lost to Iowa State 78-59. Goodbye number 9 ranking, and there will be those who question whether the Tigers should even be in the Top 25. The Tigers travel to Athens Wednesday to take on Georgia. It’ll be another chance for a victory over a Power 5 opponent.

Back in Memphis, the Grizzlies lost Ja Morant in the first quarter to a possible knee sprain. They then went on to lose to the Atlanta Hawks, 132-100. The Grizzlies drop to 9-10, under the .500 mark, and fall to 8th-10th place in the Western Conference.  Next up: The Grizz host the Sacramento Kings tomorrow at 5.

The big event Downtown today is the Downtown Christmas tree lighting at the corner of Main and Peabody Place. From 4 to 6 this afternoon, you can get photos with Santa. There will be free hot chocolate, and the first 200 kids get free candy from Dinstuhl’s, whose Downtown shop is just steps away. The actual lighting of the approximately 50-foot-tall tree will happen about 4:30.

The remaining performances of The Lion King at the Orpheum have been canceled. Breakthrough COVID cases have been detected among the show’s cast and among the local crew. Read more 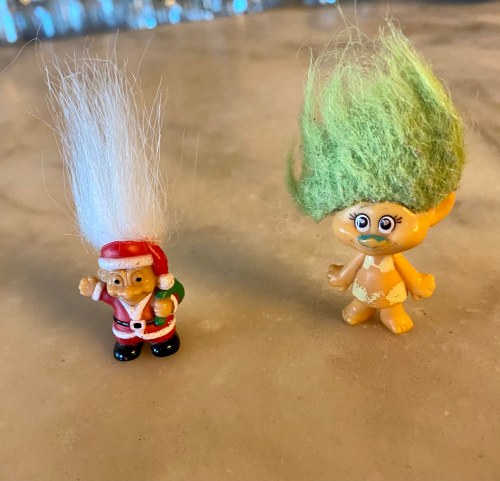 It’s that time of year when Santa Troll joins Perjorie on her Memphis adventures.

River City Records has a sweet deal going on: A Jensen Bluetooth turntable and Bluetooth speakers for $199.88. The turntable comes with a $75 gift card to River City Records, so you can get started building your collection. There are a limited number, so if you want one, get down there.

Have a lot of Thanksgiving leftovers? Make loaded nachos with them.

The new COVID variant that is wreaking havoc on South Africa and Botswana has a name now: Omicron. Travel bans are being issued to contain the new variant. Eventually there are going to be so many variants that they run out of greek letters. Maybe they could use Chinese characters since that’s where the virus originated.

Today is Movember, a day to raise awareness of men’s health, at Grind City Brewing Co. They’re open from noon to 10 PM. Here’s the schedule:

Hollywood A-lister and the most electrifying man in sports entertainment, The Rock, proved this week that he is truly one of the good guys. He learned of a Navy veteran in need of a vehicle, a man who is a leader in his church and who prepares meals for women escaping domestic abuse. The Rock gave him a truck. But The Rock did not just stop by a car lot and pick something out – he gave the vet his own personal truck.

Use code THANKS through November 29 to get 25% off tickets to WWE Monday Night RAW held at FedExForum on December 6.

My Arkansas Razorbacks picked up a nice win over Missouri yesterday to improve to 8-4. The latest projection I’ve seen has the Hogs facing Clemson in the Gator Bowl. Sounds good to me.

It’s Small Business Saturday, when you are encouraged to avoid the malls, big-box retailers, and national chains, and instead shop locally and support small business owners. My top two recommendations would be Feelin’ Memphis (509 S. Main) and Walking Pants Curiosities (109 G.E. Patterson). You will have no problem finding unique gifts at those two places, and you’ll be spending your dollars with people who are a part of the community.

As for me, I plan on doing some shopping for PBR at 3 great locally-owned businesses this morning, afternoon, and evening. Back tomorrow with more news.