The Memphis Public Libraries posted some news to Facebook yesterday that I have been waiting a long, long time to hear:

The ribbon-cutting ceremony for the renovated Cossitt Library at Front and Monroe is next week!!!!! Tuesday, January 25 at 9:30 AM.

I will be there and I am so excited! Since I can write from any location I want, I anticipate taking my laptop up there often and getting a lot of work done. Plus I’ll have access to thousands of books to inspire writing ideas.

I re-shared the library system’s post, and 14 hours later, my re-share has 7 likes. If I’d shared a post about a new nightclub opening rather than a library, I bet it would have got 70 likes. Such is the world we live in.

I finally located my mugshot on the wall at the Blind Bear: 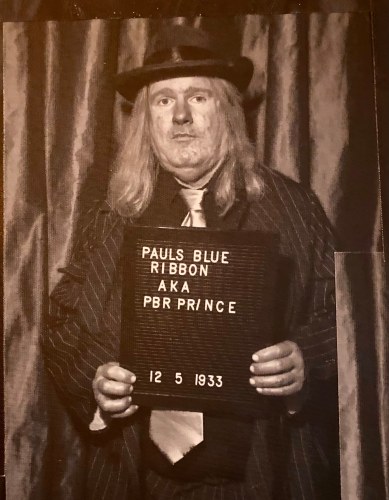 You can find the mugshots on the wall to the right, immediately after you walk in the front door. Want your mugshot taken? You can have it done at the St. Valentine’s Day Massacre party on February 12.

I’m kinda surprised at how many people were smiling or giggling in their mugshots. Think about it. You’ve been making thousands of dollars a week smuggling rum into the States from Canada for 7, 8 years now. Now it’s 1929 and the Feds finally nabbed you. You’re probably not going to know life outside a prison cell again until the 1950s. Would YOU be smiling?

Memphis-themed gift shop Feelin’ Memphis now has Homecooking Dinner Mixes by Southern Sister’s Gourmet. Tawanda and Cordell tried the Chicken and Dumplins and the Mississippi Mud Brownies this week and loved it. Stop by the store at 509 S. Main and pick some up.

Penny Hardaway’s profanity-laced tirade against the media following Thursday’s loss to SMU made the national news – New York Post – ESPN. I’m really beginning to think that Penny has subconsciously, but not yet consciously, realized he’s in over his head in this head coaching gig. I’m tired of hearing, yeah, we woulda won but injuries and COVID and 17-18-year-old players. I want to hear, “No excuses. I should have done a better job instructing my team.”

OK, good… now I see that Penny apologized to the city and the fans for his rant. That apology needed to happen.

The Grizzlies got a nice road win over the Denver Nuggets, 122-118, last night, with Ja looking like his usual All-Star self and dropping in 38.

There was a vehicle collision with injuries this morning at Jackson and North B.B. King. That’s near the entrance to St. Jude. I hope no patients or family members were involved.

Barbie’s Inspiring Women series has added an Ida B. Wells doll to its collection.

Time to eat Chef Boy-ar-dee spaghetti and meatballs and read the WWE Smackdown recap from last night, then it’ll be time for a full day of bears, geese, and dogs. Back tomorrow with more news.