So last week I was hanging out with my friends Angie and Chris at the Flying Saucer, and… 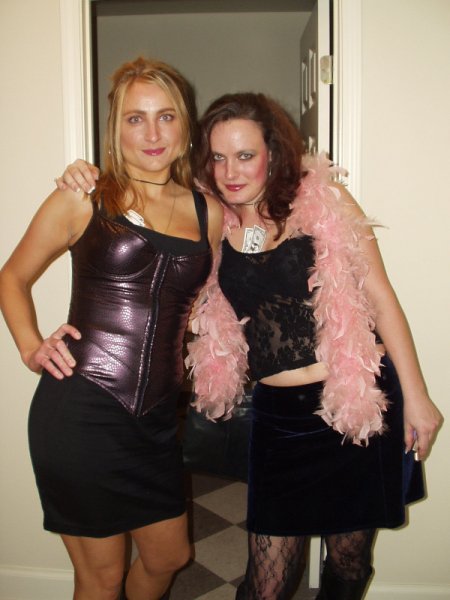 There ya go. Angie is the one on the left.

Anyway, I was hanging out with Angie and Chris at the Saucer. Angie has this new phone which is a combination phone and PDA, and for the past month I have been making fun of her nonstop about it. Seems like she can’t go 5 minutes without whipping out that phone and doing something. She took it out several times to text-message friends. Then she wanted to know the ingredients of a favorite drink, so she started up Uber Phone 3000’s bartender program. Then, one of us ordered a beer, and the description on the UFO club receipt read that the beer had “a hint of chicory.” None of us knew what chicory was, so out came Uber Phone 3000. She got on Google and looked it up. (In case you’re curious: here’s a link to a page about chicory)

Later in the evening, I was hanging out on my rooftop, as has been the case practically every night recently. It was Sunday, and one of my neighbors (the one who, later that night, put on a green tube top and went to Pat O’s) asked if Di Anne Price was playing at Huey’s this week. I didn’t know, and was too lazy to run 3 flights of stairs down to my apartment and pick up a Memphis Flyer to find out. But I thought to myself, if I had Internet access on my phone, I could hit Huey’s website and find out.

Then, another neighbor and I were waiting for the Redbirds game to be over, so the fireworks would start. We can see the scoreboard from the rooftop, but the numbers were too small to make out the score. I thought, if I had a phone with Internet access I could hit the Redbirds’ site and find out the score.

Later in the week, I was talking to a former student of mine. Like me, he’s a techie, and he was telling me about Bluetooth. “It’s real popular in Europe,” he said. “You can get into a chat-room type of environment with everyone in a certain radius who also has Bluetooth. So people will get on there and ask, ‘are you toothing?’ and total strangers will meet up that way and go have sex.” So now, not only do I want a phone with Internet capability, but Bluetooth as well.

Uber Phone 3000 has Internet and Bluetooth.

Hmmm. I have 13 months left on my current contract. Maybe Uber Phone 4000 will be out by then.