We’ll start this off with a few pics I snapped last night at Earnestine & Hazel’s. These are menus from March 1983, when South Main was still very much a red light district, and E&H was a restaurant downstairs and a brothel upstairs. 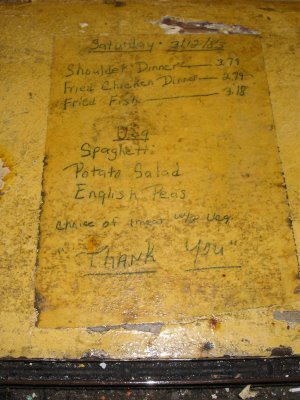 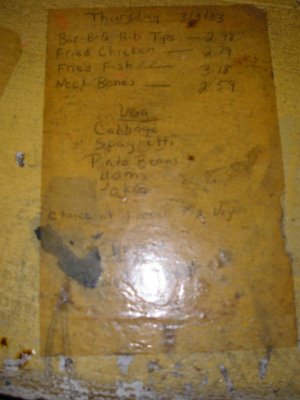 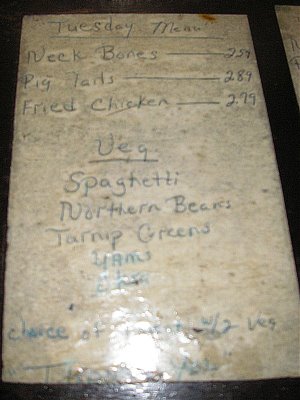 The menu at E&H has since been cut to just one item, the Soul Burger, so don’t expect to go there and order “Pig Tails.”

I had a good time hanging out with fellow blogger Kat and her friend KH at the Trolley Tour last night. Kat wore a tube top as promised. Dammit, I forgot to take a pic! Kat, did KH take any? Don’t forget, two months from today, we’ll kick off Tube Top Month in this blog. Every post will make a reference to tube tops, no matter how irrelevant.

I also had to take steps to avoid The Most Annoying Woman On The Planet last night. I’ve written about her before: This is the woman who brought her damn dog to Cooper-Young Fest, despite numerous “PLEASE, NO PETS” signs and ads. This is the woman who routinely makes plans to meet you at 9:00 and then shows up at 10:50. This is the woman who made a New Year’s resolution not to be more than a half hour late when meeting people. Anyway, I won’t get into all the details of our conversation last night, but I’ll just say that I had to take evasive maneuvers to get away from her. ATTN C. AND I.: I’m really starting to see your point about her “using” me

MyMemphis.tv, the website connected to Wednesday night’s premiere of the My Memphis movie, is now online. It contains interviews with young, hip Memphis professionals about what they like about the city, and should be a tremendous marketing piece for Memphis. Check it out.

The latest news from Romania is that their president is meeting with the leader of China to improve Romanian-Chinese relations. They’re even building a Chinatown near Bucharest. How cool is that? Now, if I go to Romania, not only will I be able to hit on hot Romanian girls, but hot Chinese girls as well.

That reminds me… I was surfing some websites recently, and I came across an ad for a video that teaches American men how to seduce Asian women. Its marketing tagline read,

“Ah, so GI! You like make ficky, ficky with sexy Oriental girl? Well now you can…”

Good god… that’s just completely politically incorrect and totally wrong. It made me laugh really hard though, so I thought I’d include it.

In other news… it appears that Conte’s, the Italian restaurant on Madison just east of Second, is now staying open for dinner until 9:00 every night they are open (Tuesday-Saturday). Good for them! We need to support businesses that see themselves as part of the downtown neighborhood and stay open late so its residents can get a good dinner.

I also have a restaurant review from regular reader and former neighbor Don… he says that he recently ate at Sgt. Jalapeno’s Tortilla Company on Adams (inside the Comfort Inn) and the fajitas are excellent.

All right… it’s a beautiful day and it’s time to go outside. See you tomorrow with “Deal of the Week” and possibly other news.

I wonder if they have next-day air delivery for that tape on seducing Asian women?