Yesterday was my last day at ACB. Even though I’m looking forward to starting with the City Schools on Monday, a job offering more money and new challenges, it was weird/sad to have to leave a company I really like. I have nothing but good things to say about ACB – the work environment was casual, free from office politics, and everyone got along.

I’ll take a moment to tell a quick story: Several months ago I was at the Tap Room on a Friday night, and ACB’s general manager came in with a couple of friends, who also happened to be mutual friends of mine. “Oh, you know Paul?” they asked the GM.

“Yeah, Paul works with me,” he said. Not works for me, but works with me. I always appreciated that little sign of respect – kind of a way of saying, hey, outside the office we’re all equals. That kind of thing was indicative of the way I was treated at ACB.

My boss was great too. He gave me projects that expanded my knowledge and skills, he was always there to answer questions and to let me bounce ideas off him, but he didn’t micromanage. Even when he made suggestions on how to improve, he did it the right way, always accentuating the positive. He’s one of the good guys. I’ll miss working for him.

After work, I celebrated at Big Foot Lodge with a deep-dish chocolate chip cookie a la mode. Here’s a pic: 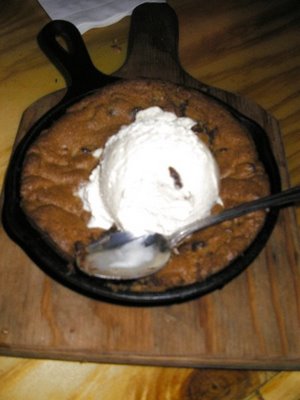 Guys, if you have a girlfriend you need to bring her to Big Foot to share one of these cookies. Unless she’s one of those girls who will whine about how many calories it has – in that case, call and tell her you have to work late, and then go to Big Foot and eat the cookie by yourself.

And if you have kids, it goes without saying that you need to take them to Big Foot – take a look at the skillet desserts and other desserts on their menu.

Every time I go to Big Foot, they make me feel so welcome there. Not even the presence of The Most Annoying Woman On The Planet could ruin my good time last night. I watched the Grizzlies game on their TVs and hung out afterward until almost 12:00.

I have a friend who is looking to sublet her apartment in Midtown for a couple of months, and after that, once the lease is up, you may be able to take over a new lease. It’s on the top floor (6th floor I think) of a very nice apartment building (I’ve been in the building before, although not her apartment). I don’t want to quote an exact number but rent would be less than half what I pay at No. 10 downtown. She’s even willing to leave basic furniture in if needed. This offer is open only to people I know personally – I don’t want to send her some random person who may turn out to be crazy or irresponsible. If interested e-mail me and I’ll pass on the info.

So, today is the Overton Square crawfish festival. I’m trying to decide whether to drive my car or ride my bike up there. Hmmm… last year I walked, although it took an hour to get there. Here’s a money-saving trick: they’ve been price-gouging on the beer (4 bucks for a 16 oz. Budweiser draft) in recent years. But, you can walk across Cooper to the convenience store and buy a 24 oz. can of beer for 99 cents and sneak it in.

I’m trying to decide if I’m going to go to Hollywood South, Mpact’s annual fundraiser tonight at Don’t-Call-It-The-Plaza-Club-Or-Someone-Will-Correct-You. On one hand, it’s kinda expensive ($35 a ticket, or $65 for a VIP ticket which gives you access to the open bar; I’m sure you can figure out which kind of ticket I’d be buying). But on the other hand, Mpact threw one HELL of a party last year when they did Mpact Impacto. It really was the place to be. Hopefully they can pull it off again. Hmmm… I know there are some people talking about going to Raiford’s afterward… and I’m always up for Raiford’s.

I’ve just been kind of bored with Mpact lately… I’m coming to realize that they made a mistake when they got rid of the pillars, and I feel partially responsible because I was on the board at the time and voted for it. And if they tried to bring the pillars back, corporate donors would see it as, “oh, they’re reconfiguring themselves yet AGAIN” and they’d think the organization has no sense of direction. Not sure what the solution is.

Time to get going… I’ll be back tomorrow with Deal of the Week, and there may be a major announcement coming soon concerning that weekly blog feature. Have a good weekend everybody!