One of the things Mike King and I want to do on the Who We Are page of the Residents for a Safer Downtown Memphis site is include pictures of ourselves. This isn’t an ego trip; it’s just that a lot of people have seen my picture on the blog, and saw Mike’s picture back when I did the crime post, and have approached us to offer support and ideas. We want to encourage people to do that when they see us downtown. So, that’s why we decided to post pics – so people would recognize us.

Mike already had several pics ready to go. However, I didn’t have a usable pic. For the RSDM site, we want to project a professional image, and my blog profile pic of me wearing sunglasses and leaning against a bar just doesn’t cut it. Any existing pic I have which would qualify is over 3 years old. So, I realized I needed to take new pictures.

Now, I have no problem posting a professional looking pic of me, but I absolutely refuse to put on a suit and tie. That’s not who I am. I hate ties. I never wear them. They serve absolutely no purpose other than to make the wearer uncomfortable. If at some point we get invited to meet with the mayor I’ll dress very nicely, but no tie. Even if I got invited to the White House to meet the President, I doubt I’d put on a tie.

Trouble is, I’m not very photogenic. First pic – snapped it, switched the viewer on… no, I’m not smiling. Try it again – click… no, still not smiling. Try again – click… okay, this time I’m smiling, but I look like a doofus. Take four – click… no, I look like I’m on crystal meth in that one. Take five – click… and lo and behold, for the first time in 2 years I actually got a decent looking picture of myself. Here it is… 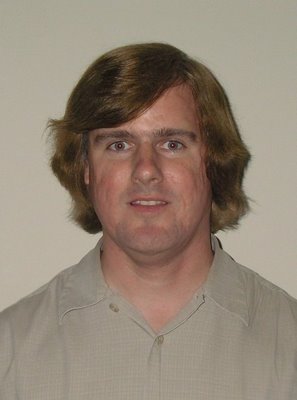 I doubt anyone is going to look at that and get on my MySpace page and start sending me “wow ur a hottie” messages or anything, but it’s the best I could do given the subject matter.

Personally, I still prefer my pic from last Halloween… 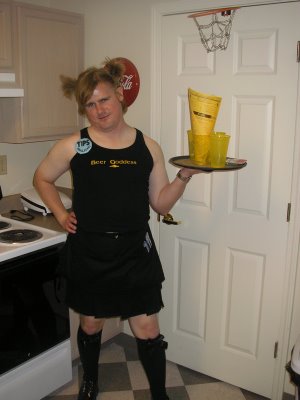 … but I suppose this couldn’t really be considered a “professional” look. Then again, it is a work uniform, so it is professional in a sense.

All right, enough ugly pictures. For a much more attractive subject I recommend scrolling down to the previous post and looking at Meredith’s tube top pic.