First of all, if you missed my Residents for a Safer Downtown Memphis co-founder Mike King on the news tonight, here’s the link. Once there, click on “Video” to view the footage. I am thrilled with the coverage they gave us. I’ve already had a couple of people e-mail and ask, did I mind that they said, “King and a friend started the organization”? Not at all! This is not about me, it’s about keeping downtown safe, and they mentioned the walking police patrols! The Memphis Police, in a meeting week before last, promised us that they would put walking police patrols on the streets, since downtown is a walking neighborhood. Now that it’s been publicized, I can’t wait to go back to MPD and get a timetable for the patrols’ implementation.

On to other news… I needed to unwind tonight and hung out at the Beale Street Tap Room for a while. I had my camera with me and decided to snap a pic of myself holding my mug. On the 7th attempt I finally came up with a good photo: 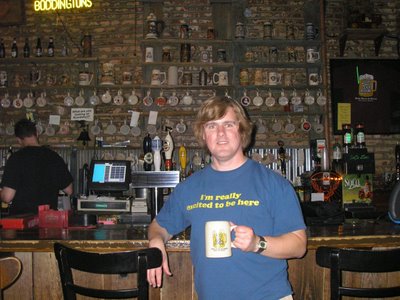 Click on the pic for a full-sized image. Warning: dialup users beware, I didn’t downsize this one at all because the detail is so good. It’s almost a megabyte in size.

This pic is eventually going to end up as my profile pic for my blog, or MySpace, or both.

On the way home I stopped by Big Foot and got a four-cheese burger, add mushrooms, to go. I’ll leave it to your imagination to determine if the burger was good.

I wandered by Country on Beale tonight and there were tons of people, I’d estimate 1,000 at least. Many of them were hot, young females. Although, I saw a higher proportion of tube top wearers going into the Peabody for their rooftop party.

That’s it for now… don’t forget, a major announcement tomorrow. And tomorrow night, I’ll definitely be at South Main Trolley Art Tour with my sleuth hat on. I have a feeling that a mystery is about to be solved.