Sitting here waiting for it to be 7:00, start time for my apartment building’s Christmas party downstairs. So while I’m waiting, you get a post. Don’t know if this one will be interesting because it’s going to be more of a stream-of-consciousness thing than a post with an actual topic. I still have the “Downtown’s best burgers” post in Drafts, but if I published that one next, that’d be three food-related posts in a row.

Good seeing fellow blogger Semi-Charmed Kat last night at the Saucer. She told me she was surprised that I said good things about Cordova in yesterday’s “Eat some BBQ, help make a wish come true” post. Well, the thing is, I was afraid that if I used my usual nickname for that part of town (“East Bumblefuck”) someone might get offended and not go to the BBQ place and support Make-A-Wish. Now, normally I couldn’t care less if my blog offends people, but in yesterday’s case it could’ve cost Make-A-Wish money. But never fear Kat, the charity drive is over and I’m back to making fun of the ‘burbs.

If you haven’t been checking out Kat’s blog lately, allow me to summarize: Ptolemy this Ptolemy that Ptolemy Ptolemy Ptolemy Ptolemy Ptolemy Ptolemy Ptolemy and more Ptolemy. A few days ago she listed partial results of the Ptolemy royalty vote, then deleted them when she learned that it’s supposed to be a big secret until February, and I nearly drunk-posted the results back to my own blog just to be an ass and to show my contempt for the whole Carnival royalty concept. But I thought better of it. Who knows, maybe I’ll get drunk again and go ahead with the post… did I mention that my apartment building’s Christmas party is tonight?

What’s going on this week… well, tomorrow I’ll be attending Mpact Memphis’ Promote Memphis committee meeting at Davis-Kidd (6:00). The committee will focus on ways to project a positive image of our city, both to our own residents and to people from outside the region. This committee was always a lot of fun to serve on back in the old days and I look forward to seeing what they come up with.

Ten Mile Bayou plays the Saucer Friday night. Funny how I came to be familiar with their music… back in September I was sitting at one of the window seats at the Saucer, one of the ones facing Peabody Place, and the band was playing and they took a break. The lead singer/guitarist came over and introduced himself, and said he saw me at the Saucer a lot and wanted to thank me for my support. I was like, “Um, yeah, sure, no problem…” The reason I sat where I did that night, in a seat with a good view of the band, was due not so much to the band itself, but due to the fact that the waitress working that section had on a particularly short skirt that night. But I came back and heard them at one of their subsequent Saucer gigs, and I thought to myself, “Damn, these guys are really good.” Soulful kind of rock with a Southern influence and a whole lot of feeling. They play both covers and originals. Definitely worth checking out if you’re downtown Friday night.

The downtown Christmas parade is Saturday. Parade is on Beale Street at 4 pm, and there will be some bands and Christmas stuff going on at Handy Park from noon to 4. You know, a few days ago I was remembering the December I spent in San Diego, when it was 77 degrees and I wore shorts the day of the Christmas parade. Well, thanks to our wacky weather it looks like I’ll be able to wear shorts to a Memphis Christmas parade as well… the Weather Channel is predicting high 72, low 57 for Saturday (they’re also saying highs will be in the 70s Sunday and Monday as well). 10% chance of rain. I like it!

With beautiful weather on Sunday, I’ll probably spend the day taking photos for the new website I’m building, so my hiatus from Sunday brunch will continue. I’ll probably stop in Sleep Out’s for one PBR though. Later in the day, after the sun goes down, I’ll probably download all the photos I took onto my laptop, and take the show on the road to the Saucer and get some work done there. And drink some beer.

Anyone get their hair cut at the new CityHouse Salon on GE Patterson? I’m considering giving them a try. It’s been 6 weeks ago as of tomorrow that my current stylist gave me a way-too-short post-Halloween haircut, and it’s finally grown out to what I consider a minimum acceptable length. I’ll probably let it grow for another 6 weeks at least before I get it cut again. Some of my guy friends get four haircuts to every one of mine.

My extra time off work has been approved. The city schools give people who work there 7 days off for the holidays (the week of December 25, and January 1 and 2), and I asked to take January 3-5 off so I could have a full two weeks of sleeping late and not having to sit in a cubicle. Now that’s going to be nice! No real plans other than a couple of days in Little Rock around Christmastime, and one of the nights when I’m off and in Memphis I plan to stumble in the Black Diamond about 3 in the morning and order a pizza with sausage and black olives. It’s a tradition I started the last time I had some extended time off. Hang on, let’s post a pic of that pizza: 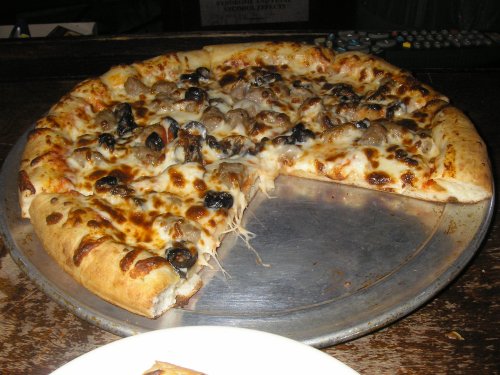 And just for the heck of it, let’s also post what I had to drink with that pizza: 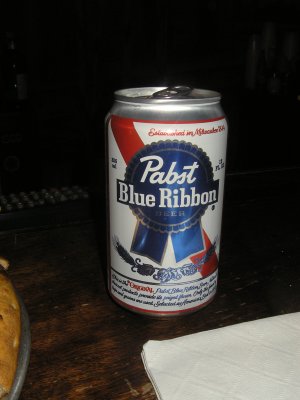 There ya go. The Diamond has the best pizza downtown. And their kitchen is open super-late. See, Denny’s isn’t your only late-night dining option downtown.

Hey, I guess this turned into a food post after all. And it took me an hour to type, so it’s almost party time now. Guess I’ll hit Publish and go get dressed.