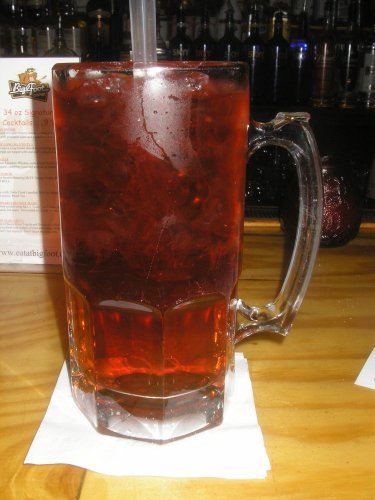 (PROFANITY/VULGARITY ALERT:  This is a drunk post.  If R-rated and above topics offend you, skip this post.)

Pictured above is the “Maple Leaf,” one of the 34 oz. mixed drinks on Big Foot Lodge’s drink menu.  According to the menu, it consists of Forty Creek Canadian whiskey, spiced rum, Southern Comfort, banana liqueur, cranberry juice and a splash of Sierra Mist.  Bartender Terry tells me that sloe gin is a secret ingredient.

The reason I got to have one of these tonight is that the Saucer SUCKED.  We were in a 4-way tie for first place in trivia.  For the tie-breaker (total million $ taken in at the box office for Shrek 3) we came in second and picked up a $25 gift certificate, bringing our total to $225 for the next party.  By the time trivia was over the place was dead and the 9 people who still go to Grizzlies games were not going to revive the place, even if they all came in after the team’s latest loss.  I tabbed out at 9:20, one of my earliest Tuesday night exits ever.

So I moved on to Big Foot.  My main reason for picking that bar was not so much the huge-ass drinks, but the blackened meatball Caesar salad that my BFF told me about the night before.  (Okay.  I’m going to admit something here.  Between you, me and the lamp post, my BFF is actually a pretty awesome girl.  But I will never tell her that to her face, as it would ruin the dynamic of our relationship.  If anyone asks me publicly and I think my response might get back to her, I’ll say that she’s a douche bag and she fucking sucks.)  It comes with a Heinz 57 Caesar dressing and pita bread on the side.  Yummy! 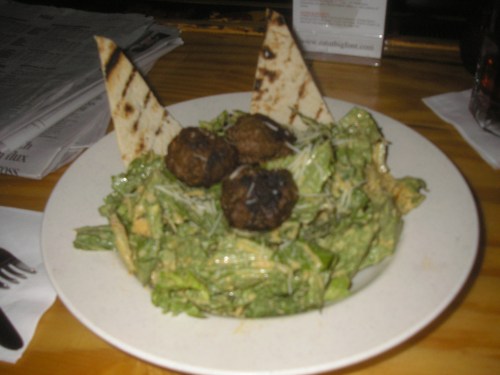 While eating the salad and drinking my 34 oz. drink, I watched #14 Vandy take down #1 Tennessee.  Gosh, that #1 ranking didn’t last long, did it? Bruce Pearl looked like a complete fucking tool and he’s lucky he didn’t get ejected from the game.  Watching that orange tie flap around made me think Bruce’s unspoken message was “this tie is 50 times as long as my penis.”  Hope you enjoyed being #1 while it lasted, Tennessee!  NUH-UH GIRL?  FRANK?  YOU HAVE COMMENTS???  Didn’t think so.  CARMEL?  Haven’t forgotten you’re a UT alum.  Not even if you put on an orange tube top would I root for the Vols.

Let’s get the beer report out of the way before I move on to actual important announcements.  Oh by the way, the Saucer forgot to scan ANOTHER one of my beers.  That makes four.

Damn this is getting expensive.  The Samuel Smith beer functioned as the bonus beer for trivia (drink a British beer, get 5 free points).

Shaq was seen eating at Sam’s Hamburgers at Main and Madison today around 1 PM.

The Center City Commission is in the process of hiring security to patrol Downtown April-June, now that the patrols have been funded.  Beyond the training provided by their company, they will receive 24 hours of additional training.  Handling-Panhandling co-moderator Mike King and I have been asked to teach an hour of that training  We’ve been asked to talk about panhandlers’ methods of operation and residents’ reaction to constantly being panhandled.  Needless to say we are delighted to be asked.  I plan on giving the security personnel an earful about some of our favorite bums down here.  Maybe we can finally get some of the worst of the worst off the streets.

I want to take a moment to tell you how awesome the people who run the Red Rooster are.  For every Tiger game there’s a big debate among my group about where to have the watch party.  Up until now, I’ve been pro-Saucer, and people assume it’s because of the waitresses.  Actually it’s that it’s a big bar in the core of Downtown, and you never know who will stop in… Downtowners, people from other parts of the city, tourists.  As opposed to watching at someone’s house where it’s the same people I see every day, or Calhoun’s where it’s just us and people who live in South Main and South Bluffs.  So I saw one of the Rooster owners last night and asked if he would be open for the Wednesday game against Tulsa, because a bunch of us wanted to come up and watch.

“I hadn’t planned to open,” he said.  “But there’s a Tiger game?  And you guys want to come?  I tell you what, I’m going to open the place just for you.  We’ll be open at 5.”  And he gave me his personal e-mail and cell number.  I contacted him today and reserved an area for 20, letting him pick the spot since I didn’t notice the locations of the TVs when in there last weekend.  I have it on good authority that the game has been moved back to 7, so here’s the revised agenda:  Itta Bena at 5:45, change of venue to the Rooster at 6:45.  Just in case I don’t make it to the Saucer afterward, I’m going to go there on my lunch break and knock out my 3 plate beers (I still have the nonalcoholic beers to do, no I don’t plan on getting wasted and then going back to work).  Rapscallions/extended family/random hot girls are invited to join us in our section.  Although he said he would open “just for us” I’m sure he wouldn’t mind if the general public showed up and watched the game and bought food and beer, so come on down, should be plenty of room.

All right… I had some other stuff to blog about but I’ll save it for tomorrow.  I’m getting tired.