Pretty boring day yesterday… if you’re expecting an entertaining post this morning, this probably ain’t it.  We’ll start off with a pic of a giant Yoda Pez dispenser. 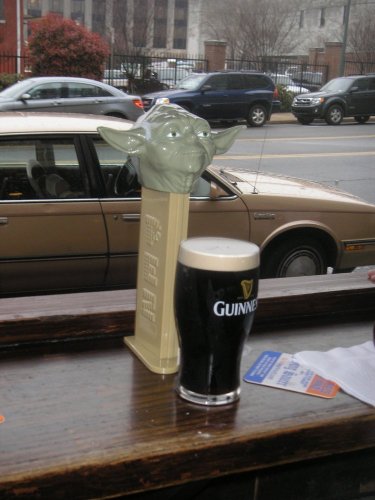 It was our friend Ryan’s birthday, and another friend, Robert, ran down to Tater Red’s to get him a present, and this is what Robert came back with.  It’s the largest Pez dispenser I’ve ever seen.  Rather than dispensing individual Pez, it dispenses packages of them.  Girls were running over to see it.  I never realized a Yoda Pez dispenser could be a chick magnet.

It gave me an idea, though… somewhere in one of my dresser drawers, I have a regular-sized Pez dispenser.  I need to load it up and start carrying it around.  Then, when bums approach me and ask for money, I can say, “I don’t have any change, but here, have a Pez.”  That would throw even the most seasoned bum off his game.  That’s a response none of them would be expecting.

(*) Actually $0 because Robert bought it for me – “I want to say I contributed to a small piece of your plate.”  Thanks!

Since I went past 150 on the Saucer’s count, the computer awarded me a coupon for a free hat.  I already have one from my first plate, and I rarely wear hats anyway, so I gave it to Ryan as a birthday present.

Other than that, not much happened yesterday.  Left the Saucer after a very long stint there, intending to go to the Red Rooster to catch Snozberry.  But there was a long line at the door and I decided I wasn’t in the mood to stand in line.  So I turned around and ended up having a beer at George Paul’s Last Call, the little bar at the back of Blues City Cafe.  I don’t go there much this time of year; I tend to hang out there July-October, which just happens to be the months when there are Romanians working at Blues City.  (I’ll have more to say about Romanians in a day or two.)  But Brooke the bartender remembered me, and remembered what I like to drink.  She told me that her brother Ross reads the blog every day, and she pointed out their new HDTVs which offer excellent game viewing from any angle at the bar.  Just a good little spot to sit and relax and hang out.

Brunch at McGuinness today, followed by the Saucer to watch the game and drink plate beers.  About a 90% chance I’ll make an appearance at Calhoun’s at some point today, but not before the games are over.

Busy week at work this week.  Will probably be working through lunch breaks, so lunchtime posts are going to need to be short and sweet.  Attn people who send me stuff to mention in the blog:  It’ll really help if you send it to me in a form where I can just copy and paste it in.  Text in the body of an e-mail is good; images I can copy and paste are good; Word documents are not so good; PDFs are bad.  Anything that’ll help me post quickly will be much appreciated for the next week and two days or so.