The gang convened at the Saucer yesterday to watch our Memphis Tigers defeat Tex-ass to make it to the Final Four for the first time in 23 years.  Here are some pics. 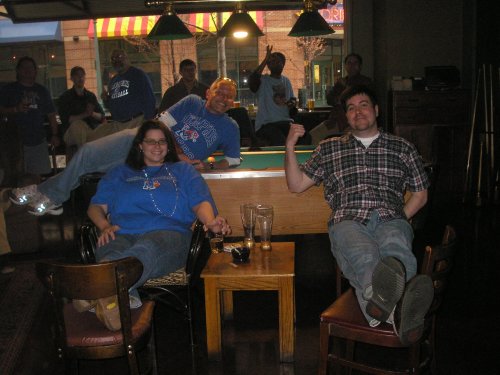 Allison, Mikey and Buddha converted the pool area of the Saucer into their own personal living room. 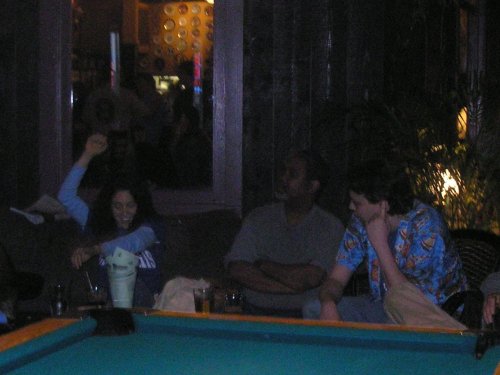 Whoa!  I finally got a pic of the Nuh-Uh Girl where she isn’t eating!  In this photo she displays her cheerleading skills to the amazement of Ken and Otto. 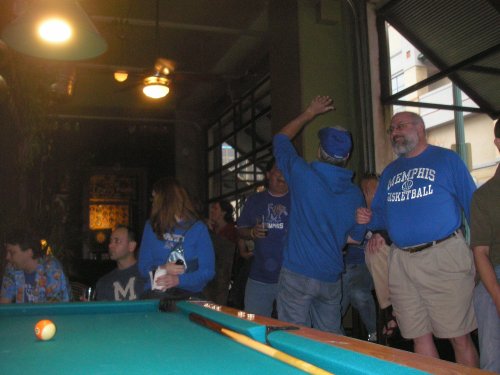 The Saucer was a sea of blue for the Tiger game. 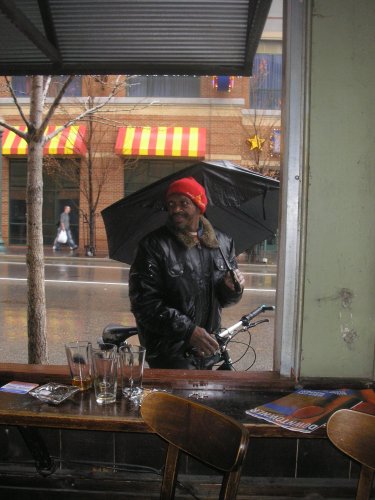 Here’s a pic of the bum who stopped by the Saucer window several times to panhandle us.  He was doing the “bum-on-a-bike” and “bum-brella” gimmicks. 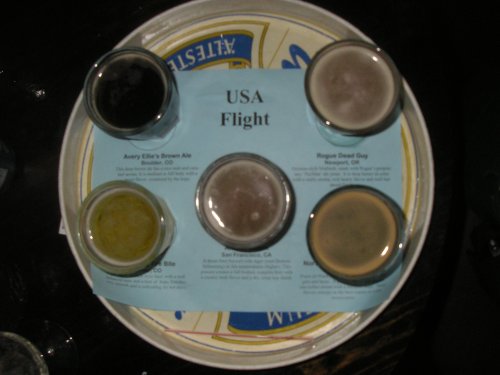 God bless the USA!  Here’s a pic of the USA Flight, one of my three plate beers. 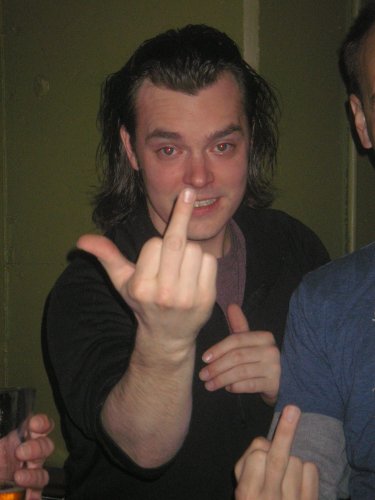 After the Tiger game was over, and the Kansas-Davidson game after that, I decided I was hungry.  My plan was to walk to Big Foot for Paul’s Drunkass Food, then move to Calhoun’s to see Best Pool Partner Ever Lauren.  Unfortunately I got sidetracked and never got to Calhoun’s.  My friend Tom saw me walk into Big Foot and said, “Paul!  Come hang out with us!  Look who’s sitting at the bar!”  Here’s a pic of Tom at the bar with… 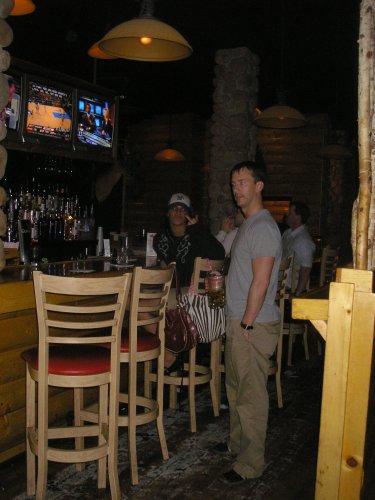 …my BFF.  See, I told you this blog wasn’t done with her.  Note her purse – her mini-me has the exact same purse.

So I went and sat with Tom, Meredith, Mendi and the bartender’s sister Michelle.  Here are a few pics of Mendi. 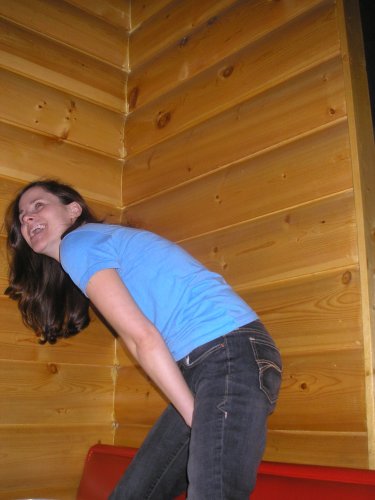 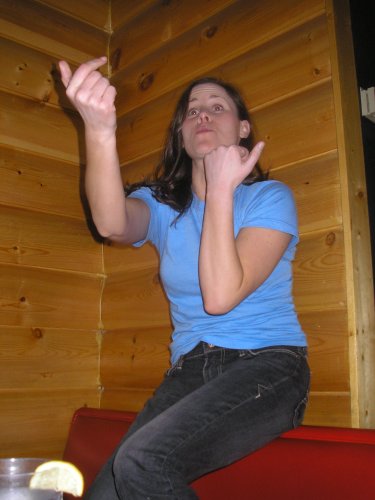 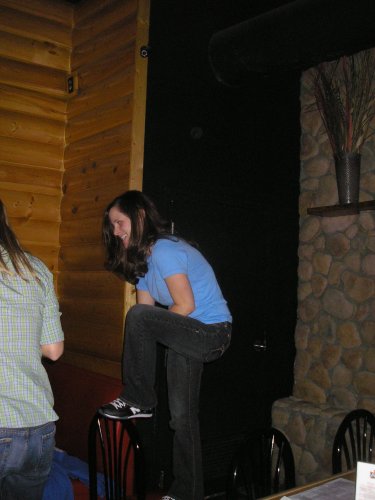 I sat at a table and played the FMK game for a couple of hours, then moved to the bar to hang out with my BFF.  Here my BFF does her usual pose for a pic.  Isn’t she sweet? 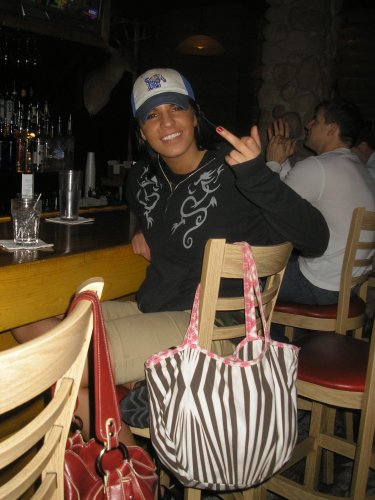 My BFF suggested we arm-wrestle, loser buys shots.  “Why don’t we skip the arm stuff and just wrestle?” I counter-proposed.

(DISCLAIMER:  Elements of the conversation above may be figments of my imagination and not what she actually said)

So we arm-wrestled.  She demolished me several matches in a row – the girl is FREAKISHLY strong – and proceeded to put about $25 worth of drinks on my tab.

I want to zoom in on the previous pic for a minute. 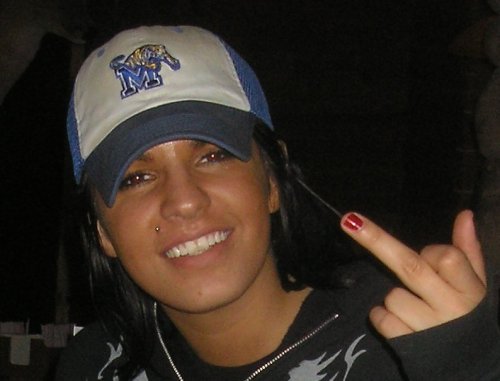 See that thing on her face?  Looks like a sterling silver pimple doesn’t it?  She should get some Clearasil and take care of that thing.  No, that’s actually a face piercing.  She PAID to have that thing done.  Can you believe that?  Wherever I would’ve rated her looks on a scale of 1 to 10, she lost an entire point when she got that piercing put in.  She used to have a nose piercing that was totally hot, but apparently nose piercings are boring because “everyone has them.”  So she went and said “Please give me a piercing that makes me look as stupid as possible.”  She told me she had to leave work for a while earlier in the day because the thing started bleeding.  Yeah.  That’s really sexy.

I tried to get her roommate Megan (who does not have an “h” or a mini-me or a bad attitude) to buy me a drink, but was unsuccessful.  Then I stole my BFF’s phone and was about to start texting random people in her address book, but she caught me.  I told her I would be showing a new friend around Downtown this coming weekend, a friend who is moving to Memphis next month and wants me to show her around her new neighborhood.  I asked my BFF for recommendations, and she proceeded to list some of the dumbest suggestions ever.  She thought the one place that is pretty much mandatory to take a new Memphian – Raiford’s – was a bad idea.  “I’d be pissed off if someone took me to Raiford’s,” said my BFF.  What an idiot.  The new owners of Raiford’s read this blog and I hope they ban her for life for saying that.

About 10:30 I finished my Big Foot Beer and tabbed out.  My BFF hinted around that she’d like to come home with me, but she was on her 12th vodka drink of the day.  I felt like I’d be taking advantage of her.  So I hugged her goodbye and made the lonely walk home by myself.

(DISCLAIMER:  Elements of the conversation above may be figments of my imagination and not what she actually said)

Time for the beer report.  The Saucer lost ANOTHER one of my beers!  I’m going to get it put back on tonight.

If you’ve never tasted Liefman’s Goudenband, go outside and mow the grass, then put the clippings in a blender and drink it.  Pretty close approximation.  The PranQster, on the other hand, is one I would rank among the top beers of the 200.

Time to get a busy week at work started.