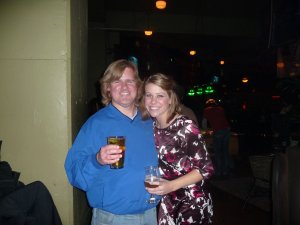 It’s a few minutes shy of December 1, but I’m going to go ahead and announce the December BFF of the Month:  Stephanie.  Yes, she has finally won.

Furthermore, it’s not due to a lack of competition.  She deserved to win.  Big time.  When I got laid off all of the sudden one warm October afternoon, she was one of the first people there with words of encouragement.  And more importantly, she was there with a 24 oz. can of PBR.  More recently, she has played a big part in the Downtown holiday festivities, which as I’ve mentioned previously, have kicked ass.  The VIP party for the holiday parade was a massive success (did I mention they had Gus’s chicken? and beer?)  As was the parade itself.  As was the entire holiday lighting project.